When we went to Utah in June, we brought along Trevor's Little Passports Utah Journal. He'd done most of the activities at home already, but he wanted to re-read the information as he was seeing the sites in person. He read the Journal in the hotel the first morning we were there... 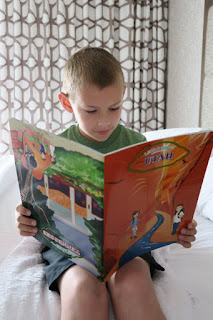 ... and brought it with him as we toured the Capitol and the rest of downtown Salt Lake City. 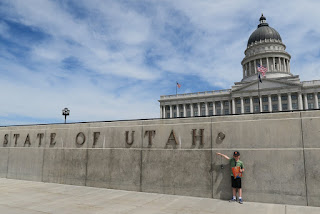 Each Little Passports Journal has a recipe in it. Utah's was for Fry Sauce. We weren't familiar with Fry Sauce; where we live in California, 99.9% of restaurants serve ketchup as a sauce for fries. We were really curious to see if Fry Sauce was a ubiquitous Utah thing. Sure enough, every meal we had that involved some sort of potato, burger, or dip-able item came with fry sauce. We liked the Hamburger & Fry Sauce at Hires Big H so much that we came home with a bottle. If you ever go to Salt Lake City, eat at Hires. Their burgers, fries, fry sauce and frosty root beers are worth going well out of your way. 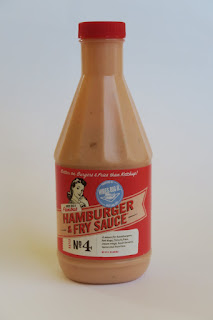 When we got home, we were eager to follow the recipe in Little Passports and make our own fry sauce. And because we're obsessed with taste tests, we decided to make three of the recipe variations listed in the Journal and put them up head-to-head with Hires. (Basically, fry sauce is two parts mayo to one part ketchup. One recipe variety had a small amount of pickle juice added and one had a sprinkle of onion powder.) Trevor put each of the three varieties plus the bottled version into cups marked A, B, C, and D. 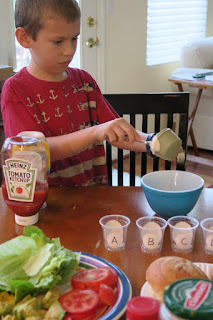 You can't properly judge fry sauce without fries, so we did a very deRosier thing: we harvested potatoes from our backyard... 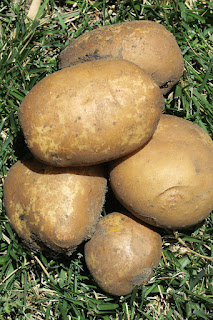 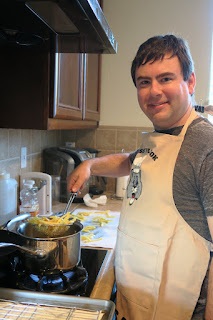 At this point, I'm imagining half of you thinking, "Cool!" and the other half appalled that our family's idea of fun is cooking tubers. If you're in the first half, read on. If you're in the second half, this might not be the right blog for you because this is exactly the kind of thing we do for fun all the time around here.

Anyway, the fries turned out GREAT. Steve is the master of deep-frying. 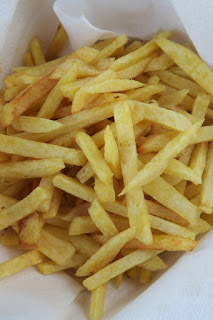 He also does an excellent job grilling cheeseburgers. 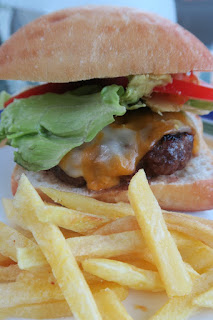 We took our burgers, fries and fry sauces out to the patio table and dug in. 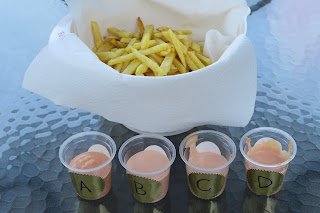 We tasted each and selected our favorites. It was tough because all of them were really good. Trevor tallied up the votes and revealed the winners. Tied for third were B (the pickle juice variety) and D (the onion powder variety). Second place was C, which was the original recipe in the Little Passports Journal. The winner was A, which was the bottled Fry Sauce from Hires.

There was still a bit of fry sauce left after dinner, so I combined all the leftovers into one container and brought it out the next night to serve as a veggie dip. Yum! As it turns out, you really can't go wrong with fry sauce.
Posted by Cindy deRosier at 5:00 AM
Email ThisBlogThis!Share to TwitterShare to FacebookShare to Pinterest
Labels: Cooking Competition, Geography, Little Passports