Those who have been reading my blog for awhile know that I always give my nephew a money-related gift. Nine times out of ten, I hide the money or disguise it in some way, like last year's "ice cream sundae" or the "can of crushed pineapple" or the "knitting kit" I gave him when he was 13. Good times! 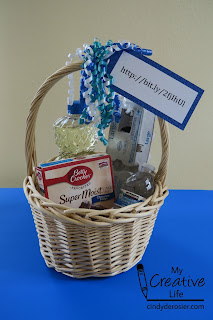 Sure, it LOOKS like a do-it-yourself birthday cake, but Timothy knows that my gifts are never what they appear at face value. Look at that smirk. He has no idea what's in store, but knows I've done something sneaky. 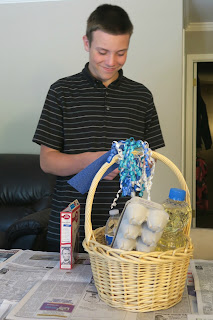 The link took him to my blog post about single-serve microwave cakes. After he read it, he started looking carefully at the items in the basket. He noticed that the cake mix had been opened and glued back together. He found the dollar bill taped to the inside right away, but it took him a bit longer to see the money taped inside the flap of the inner bag. 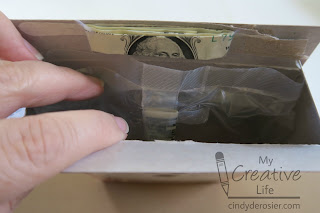 And he set the box down without noticing Abe Lincoln's face. Can you spot it in the photo? 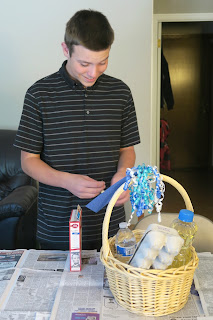 Here's what it looked like when I was assembling it. 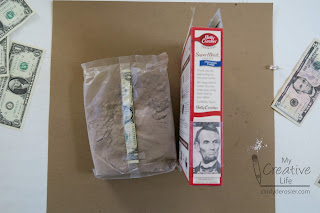 I hid money on the bottom of the water bottle and under the label. It peeled up easily and stuck down perfectly with the money underneath. 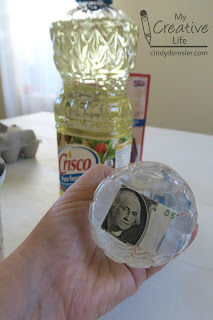 Same with the bottle of oil. 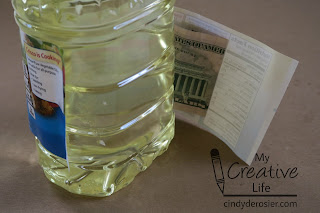 The eggs were by far the most difficult. I started by using a push pin to poke a tiny hole in each end of a washed egg. I enlarged one hole slightly with the pin, then inserted a toothpick and swirled it around to break up the yolk. With my mouth on the end with the tiny hole, I blew the egg out the larger hole and into a bowl. I repeated these steps on a few more eggs, then rinsed each with water and set them on a towel to dry. Then I made scrambled eggs.

After a few days, I used the push pin to chip a bit more off the larger hole. Not too big... 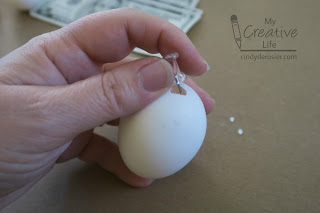 ... just enough to squeeze in some rolled-up money. 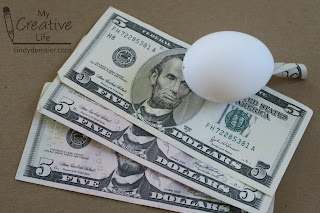 There it is, inside. 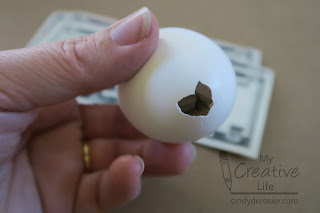 For the end with the pin prick, a little bit of spackle covered it perfectly. 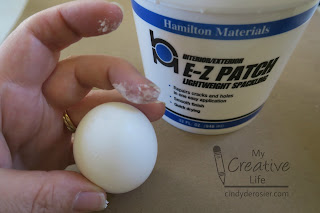 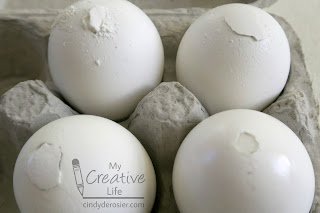 When those were dry, I spackled over them. When the spackle was dry, I lightly sanded them smooth. The best by far was the one with the shell glued inside the egg, but they all turned out fine. 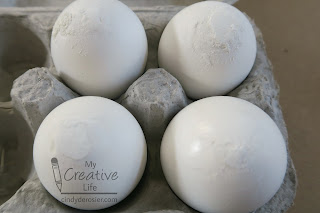 I put these four eggs in the egg carton (tiny pin prick up, large patch job down) along with 8 regular eggs. Timothy knew I'd somehow hidden money in the eggs, grabbed one and smashed it over the top of the water bottle, giving my sister a minor heart attack. Fortunately, he had chosen a money-filled egg. He grabbed another and smashed, and another and smashed. Kari was freaking out, realizing (correctly) that there were real eggs in the carton too. The real eggs were heavier and cold from the refrigerator. Timothy was able to feel the difference and only smashed the four doctored eggs. Watching his confidence with Kari's reaction was absolutely hilarious. I wish I'd videoed it, but I was laughing so hard it would have been shaking too much even if I had. 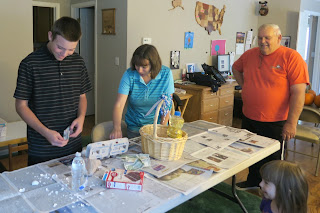 Mom asked how I would ever top this. I don't know, but I have less than two months to figure out a hidden money Christmas gift that hopefully will top it!
Email ThisBlogThis!Share to TwitterShare to FacebookShare to Pinterest
Labels: Gifts, Kari, money gift, Timothy