For my most recent session teaching hands-on history in Trevor's 5th grade classroom, I introduced the kids to toys and games from Colonial America. 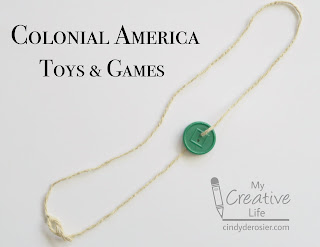 First up, the buzz saw. This simple toy consists of a knotted loop of twine with a button threaded onto it. Hold the twine with the button in the center, then wind it up by making small, rapid circles with your hands. When it is completely wound, pull outward. It should vibrate and make a cool buzzing noise. By moving your hands in and out, you can keep the buzz saw going and going. It takes some practice, though this talented friend of Trevor's managed it right away. 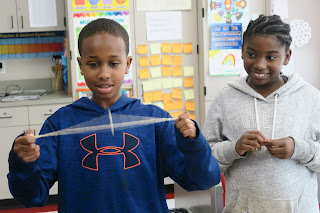 This toy was definitely not called a buzz saw during colonial times, as the buzzing circular saw was not invented until the end of the 18th century... after US independence. But we do know that children from the colonial era did play with this toy.

Next, we played a game called Ten and Four. It's a variation of Nim. Gather 14 rocks, dried beans, or other small objects and place them between you and your opponent. The first player can take 1, 2 or 3 of the beans. The second player then takes 1, 2 or 3. The goal is to force your opponent to take the last bean. 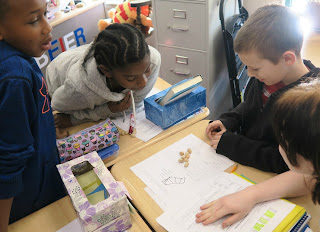 The kids loved it, especially challenging their teacher. Tomorrow I'll share another game and another toy from Colonial America.