Club 33 and a Disney 2-Pager Still to Come

My usual policy is ONE layout per trip. However, sometimes I make an exception. For example, our 2013 week at Disney World followed by a week on a Disney cruise justified two 2-page layouts. When I finally get around to scrapping our big Canada adventure of a week traveling by train followed by a 10-day cruise, I'll do two 2-pagers then also. Those really were two different trips that occurred back-to-back.

In September of 2015, our family took a 6-day trip to Disneyland. Ordinarily, this would mean one 2-pager. However, I had two special stories to tell. The first was about Trevor's new ears. The second was about eating at Club 33. 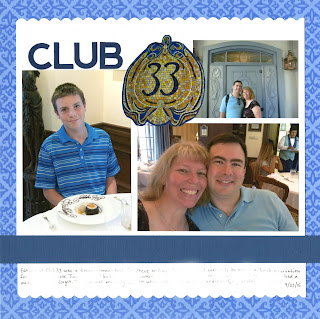 I had to blur the journaling, but I blogged about our food, the decor and all the other Club 33 details here. There are a bunch of photos as well.

I will still create a 2-pager about the Disneyland trip. It was my niece Allison's first visit, plus there were some other firsts I want to remember. There was one last, too. Farewell, Big Thunder Ranch. We'll really miss you.
Posted by Cindy deRosier at 5:00 AM