The fifth graders loved Buzz Saw and Ten-and-Four, but they liked the other toys and games from Colonial America even more. 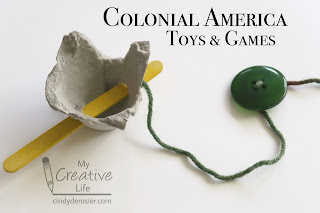 They recognized Button-and-Cup right away, as it is very similar to the kendama toys that are so popular now.

1. Cut a single cup from the egg carton. Carefully poke the scissors through each side of the cup to make a slot for the craft stick.

2. Gently slide the craft stick into the slots in the egg cup.

3. Thread the button onto the yarn. (If this is tricky, use scotch tape to make an aglet.) Tie a knot at the end of the yarn so that the button will not come off.

4. Securely tie the other end of the yarn to the shorter end of the craft stick. The longer end is the handle. Now, just hold the handle and try to flip the button into the cup! 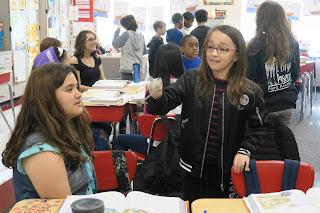 You can slide the button along the piece of yarn to adjust the difficulty. 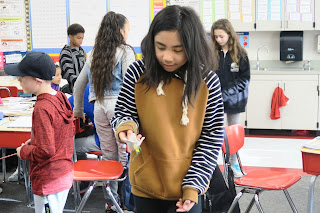 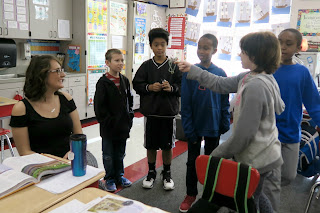 After Button-and-Cup, we moved on to Cat's Cradle, which also dates back to colonial times. It was very popular when I was a kid in the 1970's, but most of Trevor's friends had never heard of it. But they were really into it. 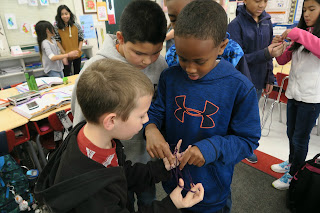 All you need is a large loop of yarn. We used Chinese jump ropes when I was a kid, but yarn works just as well. Figuring out the patterns can be tricky, but it is highly satisfying to make it all the way through. 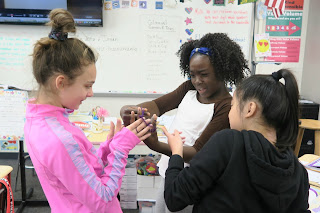 The kids would have kept going and going with Cat's Cradle if I'd let them. Most of them opted to take it out to recess with them. Pretty cool that toys from the 1600-1700's are popular in 2017. 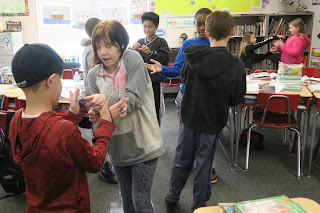 I love homemade toys like this. However, I've provided some handy links if you'd rather purchase these fun toys. (Or anything else. Any Amazon purchase you make from my links doesn't cost you any more but earns me a small commission. Thanks for supporting My Creative Life!)