Before I tell you all about our family's adventures in Nebraska, I wanted to share the Iowa activities we did through Little Passports.

Iowa is famous for growing more corn than any other state, so it's no surprise that the model and the first activity in the State Journal were both about corn. By solving the maze in the book and using a list of five of Iowa's state symbols, Trevor and I were able to discover which facts about corn were true and false. For example, did you know that an average ear of corn has hundreds of kernels arranged in 16 rows? 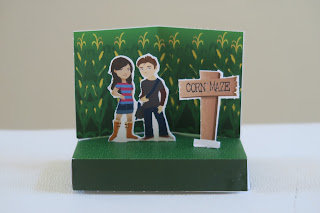 We learned that Le Mars is "The Ice Cream Capitol of the World" because Wells Enterprises has been making ice cream there since 1913. They hold an Ice Cream Days festival each year. How fun! Next, we did an activity about the Iowa State Fair, which is over 150 years old and one of the largest state fairs in the US. I was fascinated by the Butter Cow, sculpted every year from 600 pounds of butter. Crazy! 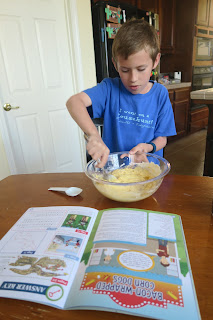 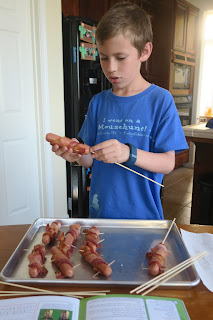 Steve and I jumped in to help with the deep-frying. And, of course, we all had a bacon-wrapped corn dog for dinner. Yum! 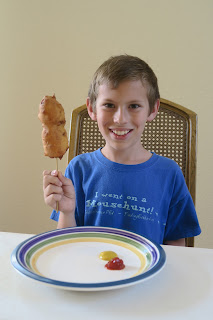 We learned about the Loess Hills, formed thousands of years ago from windblown silt. The thickest loess hills in the world are the ones in Iowa and near the Yellow River in China. Following the directions in the book, Trevor and I drew a flock of the wild turkeys that are common at Loess Hills State Forest.

We did dot-to-dots inspired by Effigy Mounds National Monument, read about famous events in Iowa history, and tried to spot the differences between two drawings of the Vermeer Mill in the town of Pella. We did a decoding activity based on the Literary Walk in Iowa City. I'd love to see it in person.

The final activity in the Iowa State Journal was a combination craft and science experiment - building your own paddle wheel. Trevor decided to use the basic instructions from the book but to change the materials from plates, tapes, and straw to LEGO bricks! Once it was built, he took it to the backyard for testing. 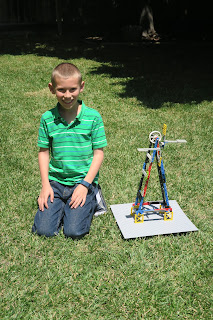 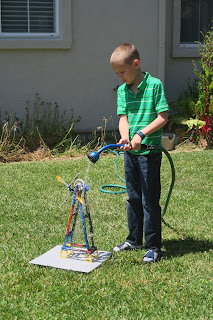 He experimented with holding the hose in different positions, varying the flow of water, and using different sprinkler heads to direct the water. Here's a video of one of his tests:


We had almost as much fun with our virtual Iowa adventures as we did actually visiting. I love how much we learn through Little Passports and how many wonderful educational activities are packed into each.