The neighborhood I grew up in was fairly diverse for a middle class town in the 1970's. While the majority of people in my life were white, the next door neighbor was Chinese, Mexican immigrants lived across the street, and Vietnamese refugees lived next to them. Our family hosted Japanese exchange students. I grew up eating the foods and experiencing the traditions of these four cultures.

Despite this early introduction to multiculturalism, I didn't experience what true diversity looks like until I became a teacher. My first class of students (and subsequent classes as well) had no majority. There was a healthy mix of kids with backgrounds in every part of the world. Some were first or second generation Americans, others traced their ancestry to slavery, and many were mixed race. They spoke many languages in addition to English and had religious practices different than my own. It was awesome because they all had so much to teach me about their lives and their experiences. And best of all, the kids accepted this diversity as normal. Trevor's experience has been similar. His school, Scout troop, church, etc. include people from a wide variety of backgrounds. I'm very grateful for this.

I'm not naive. I know racism is alive and well, even in the most diverse of communities. But I love the fact that my child has chosen friends based on the content of their character and not the color of their skin. 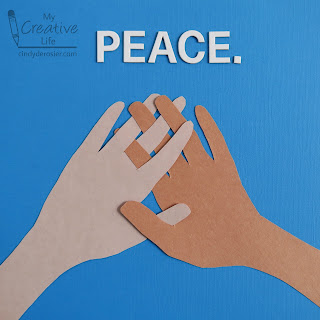 
1. Trace your hand and arm on a sheet of construction paper that matches your skin tone. Cut it out and set it aside.

2. Trace a friend's hand and arm on construction paper, matching his or her skin tone. Cut it out.

3. Interlock the fingers of the two hands, then glue them to a colorful background.

4. Trim any excess 'arm' that extends over the edges of the background construction paper.

5. Use chipboard letters, stickers, and a white crayon to spell out 'Peace' above the interlocking hands.


Email ThisBlogThis!Share to TwitterShare to FacebookShare to Pinterest
Labels: Crafts for Kids