I'm not a huge fan of bananas, but there's no question my favorite way to eat them is in a banana split. This one is unusual, because you can leave it out all day and it will never melt. 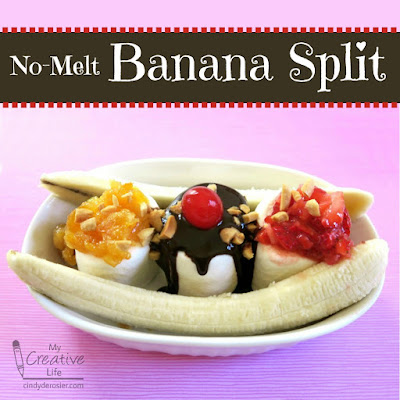 The secret? That's not ice cream. Affiliate links below.

To make your own no-melt banana split, put three jumbo marshmallows in an oval ramekin. Slice a banana in half lengthwise and put one half on either side of the marshmallows. Pour chocolate over the middle marshmallow, mashed strawberries over another, and pineapple over another (I actually used orange marmalade instead. It was delicious.) Sprinkle chopped peanuts over all three sauces, then add a maraschino cherry. 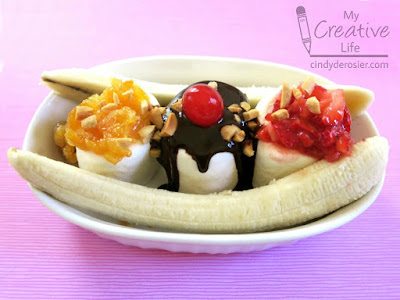 Since it's not ice cream, you can't eat it effectively with a spoon. Instead, use a knife to slice the bananas, then use a fork or skewer to pick up banana pieces and dip them in sauce. Then you can enjoy the marshmallows with whatever sauce remains. Yum!

Speaking of Banana Splits, does anyone else remember this?

What was the plot? Was there one? I literally don't remember anything about it except that I used to watch it when I was really young. Wikipedia to the rescue! And then I found this, which doesn't answer my questions, but raised a whole lot more.

Thank you for joining me on this unplanned, nonsensical stroll down memory lane. Well, less like a stroll and more like a confusing, yet strangely groovy, dance.
Email ThisBlogThis!Share to TwitterShare to FacebookShare to Pinterest
Labels: banana, banana split, Crafts for Kids, edible, marshmallow, Memory Lane