Halloween crafts are some of my absolute favorites! I particularly like ones where each crafter's personality can shine through, like today's Paper Plate Cauldron. I had great fun deciding what to put in my cauldron and eventually I settled on an eyeball, frog leg, finger, and bone. Technically, the spider is on the cauldron and not part of the recipe. Affiliate links below. 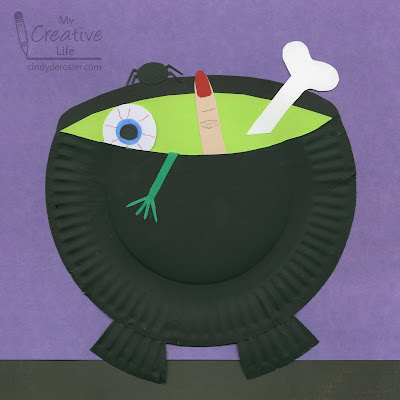 Cut a slim arc off a paper plate, then trim two pieces off the arc to make the cauldron feet. Paint the cauldron and the feet black. Glue the feet to the cauldron.
Layer a piece of lime green cardstock on top of a piece of black cardstock. Line them up with the cut edge of the cauldron. Using the arc of the paper plate as a guideline, cut the two papers. Turn the papers the other way so that the arc curves upward instead of down. Then slide the black paper up about 1/2" above the lime green paper. Glue the two papers behind the cauldron.
Now it's time to fill your cauldron! Anything goes. To make the eyeball, cut a circle of white cardstock, then draw in a black pupil, colorful iris, and wiggly red lines. I cut the frog leg from kelly green cardstock, then bent the end and draped it over the rim. I used my own finger as a guide for cutting the finger and fingernail, then drawing in the lines of the knuckles. After cutting the bone shape, I snipped the end on a sharp angle so that it would look like it was popping up from the liquid. Finally, I cut the spider and glued it on the edge of the cauldron.
---------
I made today's project as a part of Creative Crafts Halloween Edition, hosted by some of my favorite craft bloggers. Take some time to check out all the creative ideas! Leave comments along the way. Rumor has it, there's a prize for a lucky someone!