A New Flag for Mississippi

With all the focus on our recent presidential election, you might not have heard about some other news from Election Day. Mississippi voters approved Ballot Measure 3, which named a new state flag. 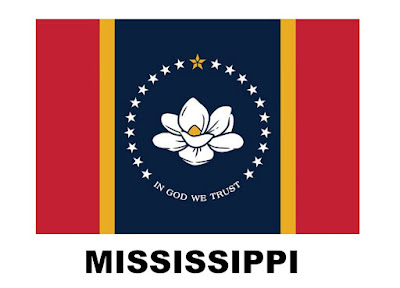 This flag was one of five designs that were finalists to replace the flag that had represented the state since 1894. I think this is a great choice. (It was my second favorite; my pick was the one with the western border of  the state, but nobody asked me.) Frankly, they could have chosen literally anything and it would have been better than the flag bearing the dishonor of being the last state flag to include the Confederate emblem. We had a wonderful time visiting Mississippi 11 months ago, but it bothered me significantly to keep seeing such an offensive flag. And if it offends me, a white tourist with no connection to the area, I can only imagine how offensive it would be to someone allegedly represented by that flag.
Technically, despite voter approval, this magnolia flag design has to pass through the Legislature when they meet in 2021. But I didn't want to leave a confederate-inspired flag on my website a day longer than necessary. The Mississippi link on my US Travel page now displays the image above. And Minnesota and Missouri, the states that come before and after Mississippi in alphabetical order, got updates too. No more confederate symbols in the navigation bars at the bottoms of their pages.

I hope to return to Mississippi someday so that we can explore more of the beautiful state. And I'm so glad that when we do, we'll be greeted by this new version of the state flag.
Email ThisBlogThis!Share to TwitterShare to FacebookShare to Pinterest
Labels: flag, Mississippi