'Tis the season for figuring out the next money gift for my nephew, Timothy! I was doing some experimenting and came up with this cardboard tube Santa. 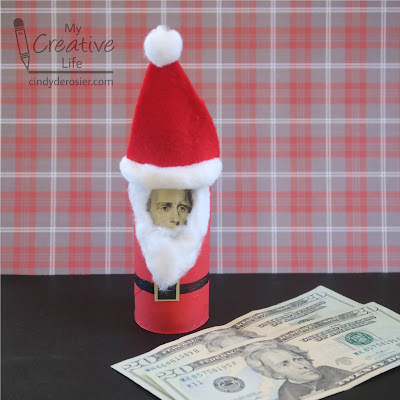 This isn't what I'm giving Timothy, because I couldn't bring myself to spend $15+ shipping him a box that contains a cardboard tube. I'd rather spend 55 cents to mail him something flat and equally creative. I'll share that after he's had a chance to open it. Next December when I'm desperate for another idea, I'm probably going to be kicking myself for sharing this, but hopefully one of you needs this now!

Hold the money up against a bright window with a piece of scratch paper over the top. Trace around the face. Cut the face out of the scratch paper, then use that to trace the face onto the cardboard tube.
Use the craft knife to cut the face opening from the cardboard tube. Paint the tube red. I painted both the inside and the outside of the tube to give it a more finished look.
Use the Sharpie to draw a belt. Cut out a small square from the gold cardstock, then color the center portion black to make the belt buckle. Glue it in place.
Cut a triangular hat. Pull apart a cotton ball, using one portion to make the pom pom at the top of the hat, a second piece for the hat's trim, and the remainder for Santa's hair and beard. Glue everything in place.
Finally, roll the money and slide it into the tube so that the president's face lines up with the opening. It will stay in place, but you can add a piece of scotch tape for extra security if you wish.
Email ThisBlogThis!Share to TwitterShare to FacebookShare to Pinterest
Labels: cardboard tube, cotton ball, Crafts for Kids, felt, money gift, paint, Plaid, Santa