There is a small group within the Fiskateers who call themselves the Liftateers.  Each week, they select one Fiskateer, choose one of her layouts, and then use it for inspiration on layouts of their own.  They recently chose me.  This is the layout they chose to scraplift: 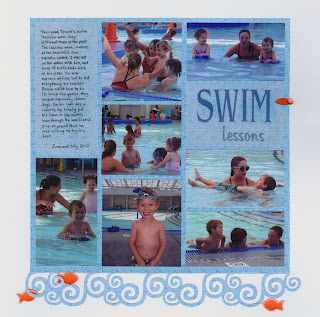 I was very excited to see what elements of my layout they would lift.  I'd identify the key components of this layout to be: the swirly border; the pops of orange amongst the blue; 7 photos; and the use of vellum for the title, journaling block and fish accents.  Here's what each of the women did: 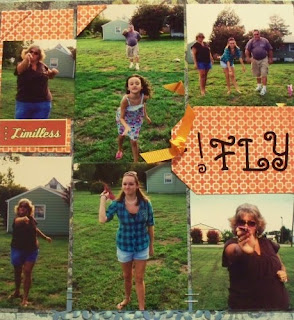 GroovyDeb used the same basic layout design as my layout, with six large photos on the page.  She has a similar title style, with a short word using all caps.  She has a leaf border in the same place as my wave border. 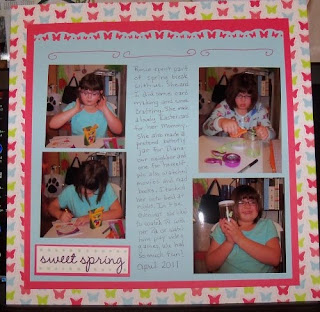 The most obvious inspiration that Donna #6036 found was the use of the border.  Hers is at the top of the layout instead of the bottom.  She has three vertical columns like mine, with the journaling moved to the center. 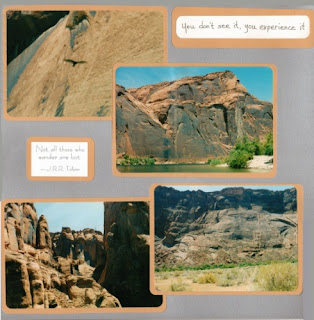 At first glance, I didn't see how my layout inspired Sue in CT's.  She didn't mention what part she lifted, but once I really studied it, I noticed that by flipping and rotating the layout, it is similar to mine.  I'm guessing the use of multiple photos influenced her as well, as none of the other layouts in her gallery have more than 1 or 2 photos on the page. 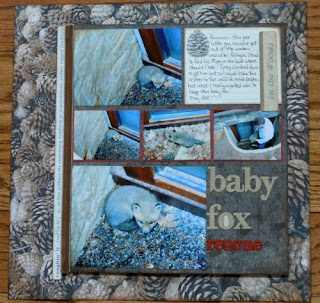 The last layout is by Vicky #7622.  If you don't immediately see my layout in this one, tip your head to the right.  Now it should look familiar!  The title, journaling and photo placement all match mine.  Where I had a wave border, she has an accent strip with a dictionary definition to help define the theme of her page.
I really enjoyed seeing how four different women interpreted my layout.  The results could not be more different!  How fun to see how individual creativity truly is!
Email ThisBlogThis!Share to TwitterShare to FacebookShare to Pinterest
Labels: Fiskateers, Layouts