I wrote this blog post as a member of the Design Team at Flamingo Scraps and wanted to share it here.

Here's a layout I made on National Scrapbook Day: 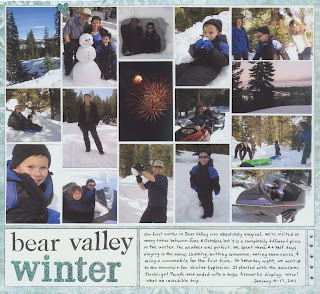 I made it during a 2 hour Scrapbook.com challenge. In order to allow enough time to scan, stitch, upload, and link, I really only had about 90 minutes. I've mentioned before that my scrapping process often involves letting a layout sit half-done for weeks. It is unheard of for me to start completely from scratch and have a finished layout in under two hours.

Part of the reason is that I like my layouts to be as perfect as possible. For example, see the word 'valley' in the title? It drives me crazy that it is crooked, but I didn't have enough time to fix it.  Notice the little heart sticker in the top left? It isn't quite the right shape. If this weren't for a challenge, I would have pushed the layout aside and come back to it later when I felt like designing and cutting out a better accent. The spacing between the pictures isn't totally even, and I don't like the columns of verticals in the center next to the column of horizontals on the right. The layout is a little plain, the design a touch boring.

Despite all that, I do like the layout. Yes, there are some things that could be better, but it's just fine. The most important thing is that I've found a home for the pictures and recorded the story of our first winter visit to Bear Valley. If I didn't embrace imperfection, I would hardly ever get anything done!
Email ThisBlogThis!Share to TwitterShare to FacebookShare to Pinterest
Labels: Bear Valley, Larry, Layouts, Ronan, Steve, Suzzi, Trevor