Quick- what does UFO stand for?

If you said unfinished object, congratulations- you are a crafter!  And if you are a crafter, you probably have some UFOs lying around right now.  I recently finished up some UFOs that had been on my desk since I got home from CHA.  What a sense of satisfaction to get those items finished!

One of my favorite classes I took at CHA was by Technique Tuesday's Eileen Collins.  The pace of the class was ambitious, to say the least.  We only finished 3 of the 5 cards she'd planned for us to do.  Here you can see the 3 finished cards in the background and the unfinished strawberry card on the table.  I took this picture right as time ran out and we had to pack up and go. 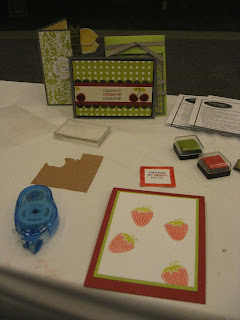 Eileen sent us home with all the materials and an instruction sheet that showed what the card was supposed to look like.  Of course, being me, my card looks totally different from what she'd intended!  The other card I made at home is the "So Sweet of You" card on the bottom left. 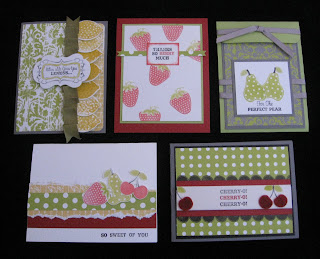 I came home from CHA with one other UFO- a pendant made with Sakura Crystal Lacquer.  Many of the booths at CHA have make & takes.  I tried to do as many as possible, especially the ones that weren't in the paper crafts area.  My favorite was this pendant, because I've never done anything like it.  It was very simple- fill the pendant blank with three different colors of lacquer, then drag a toothpick through them to mix them slightly. 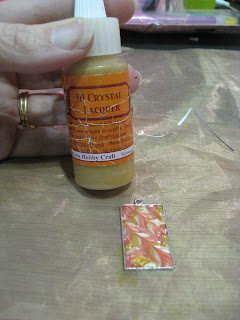 I had to leave it there until it was dry to the touch.  When I picked it up, I was given a container of 3-D Crystal Lacquer and told to put the pendant on a flat surface, flood the it with the lacquer, pierce any air bubbles, and then leave it untouched for 24+ hours.  Obviously, this wasn't happening at CHA, so home it went until I finally made the time to finish it.

When the lacquer was completely dry, I added three little rhinestones to the right hand corner to represent the three of us in our happy family. 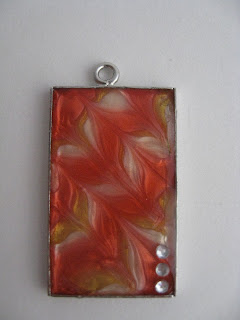 I like the way it turned out.  I haven't worn it yet though, as I don't have a silver chain that fits through the loop.  Maybe a second trip to the Michaels jewelry aisle is in order!
Posted by Cindy deRosier at 5:00 AM