My friend Adam Diament is the coolest person I know. Why? Because he does things like this in his spare time:

After I saw his videos, I was inspired to do something cool like that and scrap it. It would not be particularly impressive (or interesting) for me to visit the 7 cities in my county, but I thought it would be really fun to photograph my husband, our son, and myself each standing by a street sign with our name on it.

I did my research on Google Maps. I typed in "Cindy Street California" and wrote down each city that appeared. I did the same thing for Steve and Trevor. I went back and also checked our given names, Cynthia and Steven. I kept the list of cities by the calendar, waiting for an occasion that would take us to "our" streets. The chance to go to Cindy Way in Pleasanton came soon. On a second trip, we visited Steven Circle in Benicia and Trevor Parkway, also in Pleasanton.

This layout was so fun to put together! 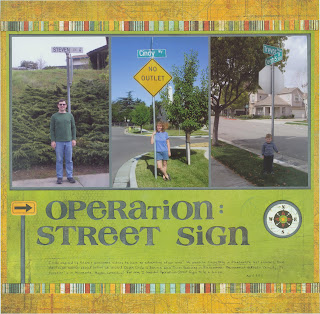 I hope this inspires you to have your own adventure! Whether it's as major as Adam's or on a smaller scale like mine, an adventure like this is a lot of fun and a great topic for a layout or album.
Email ThisBlogThis!Share to TwitterShare to FacebookShare to Pinterest
Labels: Layouts