I am a big fan of scraplifting and seeking inspiration from others... credited, of course!  But I live in fear of accidentally scraplifting someone and not giving proper credit.  I read a lot of blogs, subscribe to multiple magazines, and frequently look through galleries.  It is definitely possible that I could see an idea somewhere, move on with my life, and have the idea pop back up in my head months later, leaving me to think it's original.  I'm terrified of that.  I wouldn't want someone to do it to me and I don't ever want anyone to think I'd do that to someone else.

Here is a gift bag and card set I made for an year-end teacher gift: 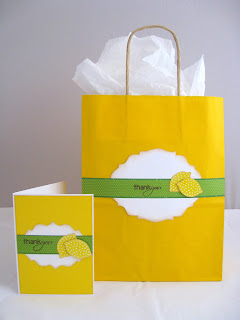 I finished the gift bag and took a break before completing the card.  During that break, I read through some blogs.... and noticed a card on Jennifer McGuire's blog that was very similar to the gift bag I had just made.  You can see hers here.  Immediately, paranoia set in.  I couldn't have scraplifted it, since I made mine before seeing hers.  But what if people think I did?!  What if hers is merely a repeat of a design she's done before and I had actually seen it?!  Ack!