The second baked item I entered at the county fair was Cinnamon Swirl Bread. The original inspiration came from allrecipes.com, but as I pretty much always do, I tinkered with the recipe a little bit. Most notably, I baked it as three mini loaves instead of one standard loaf. I also increased the cinnamon and sugar slightly. I make my version of the recipe all the time and everyone who has tried it loves it.

Here are the loaves on the cooling rack. Unfortunately, it was 100 degrees the day I baked for the fair and with the oven running all day, the AC couldn't keep up and our kitchen was HOT. The batter seemed OK, but once I baked it, the bread turned out differently than usual (and not in a good way). The tops raised a bit higher (and then fell) and the topping was more crackly. 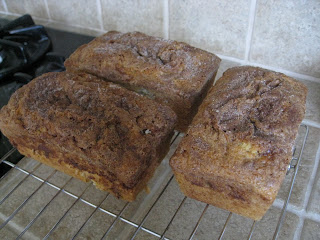 Despite those issues, it was still delicious. The judges must have liked it- another second place! 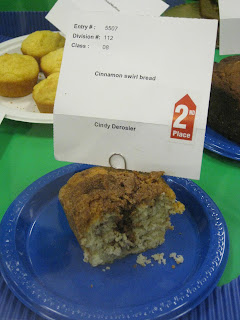 Grease and flour 3 mini loaf pans. Mix 1/3 c. sugar with cinnamon and set aside. In a large bowl, combine flour, baking powder, salt, and remaining 1 c. sugar. In a separate bowl, combine egg, milk and oil. Add to flour mixture and stir just until moistened. Pour half of the batter into pans. Sprinkle half the cinnamon sugar mixture on top. Repeat with remaining batter and cinnamon sugar. Draw a skewer through batter to marble. Bake at 350 degrees for approximately 50 minutes or until an inserted toothpick comes out clean. Cool in pan 10 minutes, then remove and cool on a wire rack. Wrap and store overnight before slicing.
Email ThisBlogThis!Share to TwitterShare to FacebookShare to Pinterest
Labels: County Fair, Recipes