My first experience with the Pinewood Derby

As I've mentioned before, I love county fairs and enter things every year.  However, since becoming a judge, I am ineligible to enter any of the categories that I judge, which means that I can't enter the very things I'm best at doing.  It's reasonable, of course, but it means I have to work harder to find categories to enter.

Every year I scour the entry guidebook to see if there is something interesting.  I don't let a silly thing like having no clue how to do make something stop me!  That's how I came to get one of these: 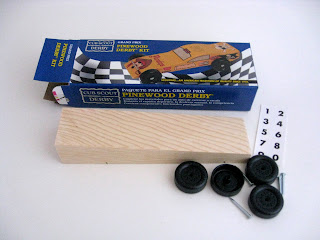 I noticed that there was a new category at the fair- a men's and women's version of the Pinewood Derby.  A quick email confirmed that entrants did not need to be Cub Scout leaders... this was open to anyone.  I immediately signed myself and Steve up.

My dad is an extremely talented woodworker and has a huge shop full of fancy tools, most of which I know how to operate at a very rudimentary level.  Unfortunately, I did not have time to go to my parents' house before the car needed to be turned in, so I was limited to the few tools we have here.  I opted for the simplest design possible- a basic wedge, which required one straight cut.

I had great fun painting it.  Here's how it turned out: 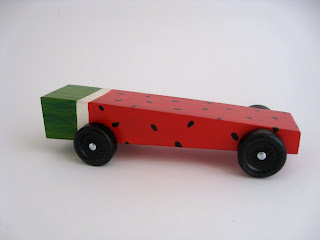 Steve went for a much more impressive design, using only the very basic tools we have here.  I can't believe he managed such complicated cuts without the proper tools!  Here's his car: 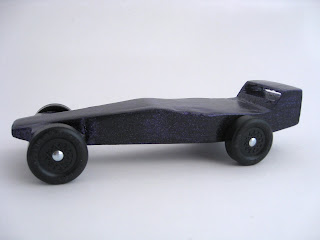 The cars are weighed, placed in the correct weight class (5 oz. or 6 oz.) and then judged on aerodynamic design, creativity, and decoration.  All this takes place well before the race.  We found the cars on display.  Steve got second place in the men's division! 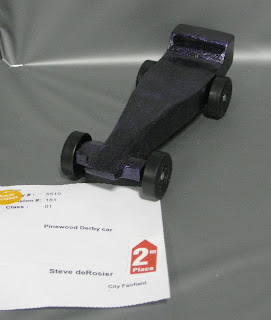 And I got second place in the women's division! 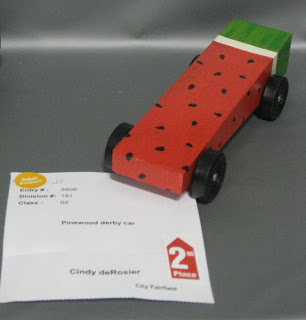 But wait... when I was uploading these pictures to the blog, I noticed a little something in the top left corner. 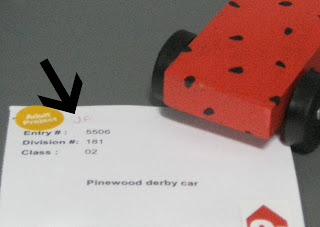 There's a small, red JF.  Being a judge, I know what that means!  Judge's Favorite!  Each judge gets to select one or two favorites that really appealed to him/her for some reason, regardless of how they placed.  Usually, a Judge's Favorite goes to the first place winner, but not always.  Exciting!


The Pinewood Derby started with the mens' and boys' divisions.  Steve's car did very well in its early heats, coming in first or second every time.  Here's a blurry photo of his car zipping by in second place. 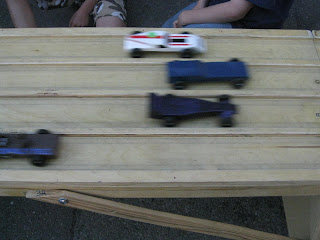 Unfortunately, as they got into the later heats, his car did worse and worse and was eventually eliminated.  But it was an excellent showing- the top third of a large field.

As you might imagine, the women's field was not very large... maybe 12 or so cars.  Here's the start of my first race. 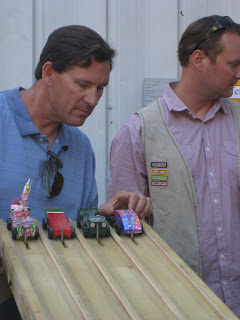 I won!  It was so exciting!  I went on to win the next two races too.  Here's a blurry picture of my car zipping by during its third race. 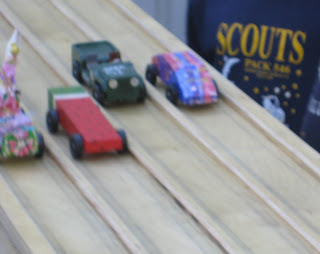 Things soon went downhill (ha!) significantly.  My car was no longer zipping along.  It wobbled, was slower than before, and even jumped the track before being eliminated.  It's pretty clear that it was damaged, either in a race itself or when it was caught at the end of one of the races.  Oh well!

I loved competing in the Pinewood Derby and definitely plan to do it again next year.  I love that I didn't let a little thing like having no clue what I was doing stop me.
Email ThisBlogThis!Share to TwitterShare to FacebookShare to Pinterest
Labels: County Fair, Pinewood Derby