I've made many, many piñatas in my life. Not 100, but definitely dozens. I learned my piñata-making skills from my mom, who helped me make my first piñata when I was around four. Apparently I learned patience from my mom as well. I have recently discovered that making a piñata with a four year old, even the world's neatest and best behaved four year old, can try one's patience.

For his Zoo Party, Trevor originally asked for a monkey piñata that hangs from one arm. I thought about how to make it strong enough to hang from an arm and not just break off with the first hit. Fortunately, Trevor changed his mind and decided he wanted a zebra instead. Much easier!

We began our piñata on a day my mom was visiting. I knew that I wouldn't be able to take pictures and supervise paper mache at the same time. We blew up a balloon, tore newspaper strips, and made our flour and water paste. 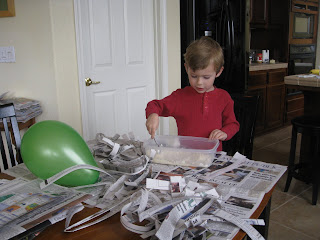 As it turned out, Trevor hated the feeling of the paste, so my mom and I ended up doing 99% of it. Trevor supervised, repeatedly encouraging us to hurry up and finish. Sigh. 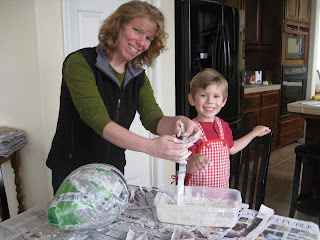 A few days later, I cut a small hole in the top of the dry piñata and Trevor popped the balloon. He was positive the whole thing would collapse and was thrilled when it held its shape. 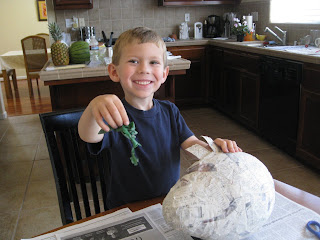 We put a base coat of white paint on the zebra and set it aside to dry. 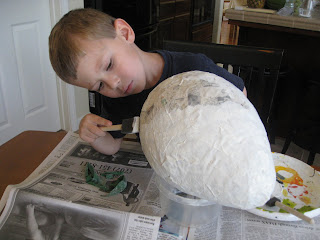 I bent a coat hanger and threaded it inside the piñata. Then we filled the piñata with candy. 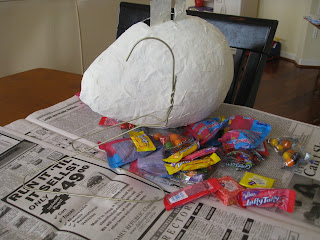 We used masking tape to secure the hanger and close the opening we'd made.  We also taped on some cardboard ears. 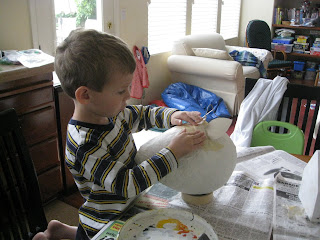 We gave the whole thing another coat of white paint. When it was dry, we added black to the nose and ears. 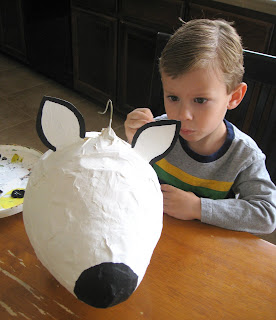 This is where Trevor really began to assert his artistic vision. We started sketching in stripes and quickly realized we disagreed about horizontal vs. vertical stripes, how wide they would be, and where they would start and end. We consulted a variety of photographs and stuffed zebras and reached a compromise. He painted on the stripes. I resisted the urge to wait until he was asleep and repaint the whole thing. The stripes are very uneven, but they are charming. I'm glad I didn't "fix" his work. Besides, he would have noticed.

I'd originally planned to cover the whole piñata with tissue paper, the way every other piñata I've ever seen has been done. But that wasn't Trevor's plan at all. He didn't want any tissue paper on it. But when I showed him the way we could make the mane with tissue paper, he agreed that looked good. He wanted to stop once the zebra had a mohawk. I insisted we keep on going. 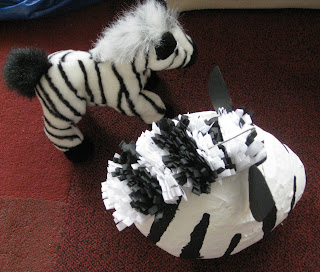 Here is the zebra with his completed hairdo. Much better than the mohawk. 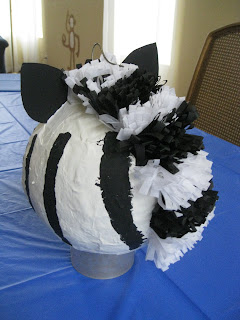 And here is the front view: 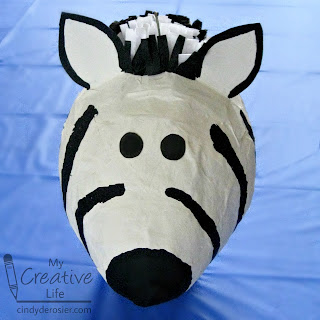 I can't even guess how many hours we spent on it. I tortured myself by googling "zebra piñata" and found one for $10 at the local party store. Fortunately, ours was WAY cuter. And, as frustrating as it was at times, we had a really fun time making it together.

We've had really strange weather here in northern California. All of Trevor's past birthdays have been warm- so warm, in fact, that we schedule our parties for the late afternoon simply so that there is ample shade in the backyard. This year we had to move the party indoors because of rain. That meant rigging up a place in the garage to break the piñata instead of outdoors like I'd planned.

Each of the kids took a turn hitting the piñata. Here's my goddaughter Ellia: 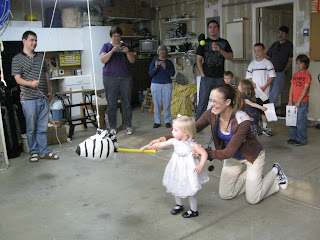 My nephew Timothy (still holding the bat) is the one who broke it: 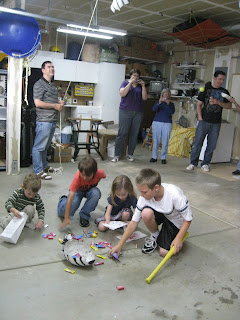 I've never seen a piñata break in half this way! Here's all that's left of the piñata: 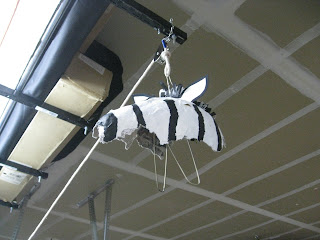 Trevor absolutely loved making and breaking his piñata. He said it was one of the best things about his party. I'm so glad. Despite my frustrations at times, I had a lot of fun with it too.
Email ThisBlogThis!Share to TwitterShare to FacebookShare to Pinterest
Labels: Crafts for Kids, Parties, Piñatas