The most common search term that brings strangers to my blog is scrapbook pages. Not surprising. The second most common: id reaction. Apparently, there are people across the globe looking for more information about why they are covered in spots. Their search leads them here.

Years ago, Steve (Husband Extraordinaire) set up cindyderosier.com as a website for my classroom. Once I stopped teaching, I kept the website in place, but put a few of my scrapbook layouts on a gallery there to use for Design Team applications. Steve eventually took both the website and gallery down, and now this blog is at cindyderosier.com. But if you use Bing to search for information about id reactions, you will see this: 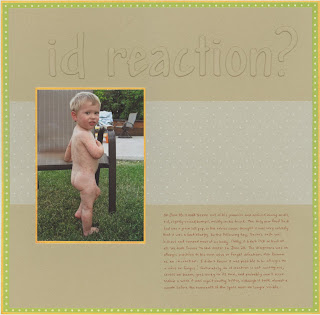 I made that layout in 2008 to document Trevor's experience with an id reaction. I had it in my gallery briefly for one Design Team application. Now, it sends people to this blog, where up until now, there was no mention of id reactions at all.

So, if you are here because you are covered in spots and want more information, welcome! I'd originally intended for "My Creative Life" to cover my adventures in art, crafts, cooking, and other creative ventures, but I suppose any post where I include a scrapbook layout counts. Besides, I really do feel bad that there are people who come here for information about an id reaction and don't get it. So I'll share what I know.

In June 2008, just after he'd turned two, Trevor woke up one morning covered in small red spots. They were slightly raised, but didn't itch or hurt. By the next day, they looked like this: 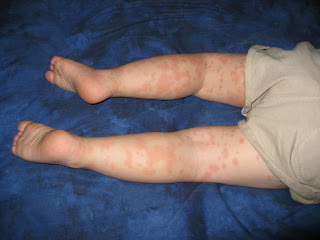 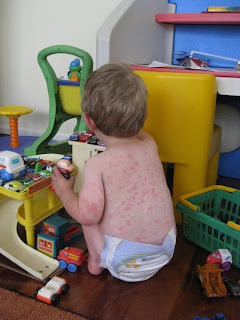 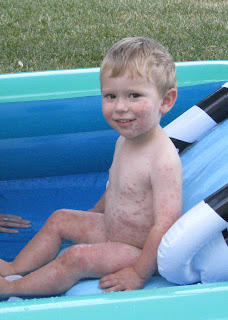 Amazingly, they didn't bother him at all. He never itched them or complained about them in the slightest. The doctor diagnosed the spots as an id reaction, which is essentially an allergic reaction to a virus or fungus. So basically, Trevor caught a virus which had no symptoms. However, he was allergic to the virus itself, which showed in the form of a skin reaction. Id reactions are not contagious, do no harm, and go away on their own. However, they can look pretty horrifying! My nephew was in the hospital at the time and because of a very strict "No Rashes" policy, I wasn't able to bring Trevor to visit his beloved cousin. It didn't matter that the id reaction wasn't contagious. We had swim lessons during this time period too- I made sure that the others in the lesson and his teacher understood that his id reaction was not contagious!

Fast-forward three years. I started this blog and immediately visitors showed up in search of information about id reactions. I made a mental note to write this blog post. And then.... one morning Trevor woke up covered in spots. Yes, according to the doctor, it's probably another id reaction! This time the spots only lasted about 4 days and were far less severe. They were isolated on his trunk, not affecting his arms, legs or face like last time. I made a mental note to write the blog post sooner rather than later.

Fast-forward 10 days later. I woke up covered in spots. Not as bad as Trevor's when he was two, but worse than his the previous week. The spots were the worst on my trunk, gradually lessening on my arms and legs, with none on my feet, hands, or face. They didn't itch or hurt. The next day they had spread down my arms and legs and were covering my hands and feet. The doctor said that it was almost certainly the same virus (again, absolutely no other symptoms) and the same allergic reaction that Trevor had. While the symptomless virus is obviously contagious, the allergic reaction isn't. It's sheer coincidence that we both were allergic to it. Anyone else who gets the virus will never know they had it. Weird!
Email ThisBlogThis!Share to TwitterShare to FacebookShare to Pinterest
Labels: Id Reaction, Layouts