Have you tried Copic markers?  They are very popular amongst scrappers, stampers, and cardmakers.  The refillable markers feature alcohol-based ink that is permanent, non-toxic, and acid-free.  They color beautifully.  The downside?  They are really expensive.  I've seen them for sale between $5-7 per marker.

I haven't actually tried Copics, as I was already addicted to Prismacolor Premier art markers when Copics became big in the scrapbook world.  I love my Prismacolors.  They are not refillable, but other than that, they have the same basic features as Copics.  And they're a bit cheaper.  They're still expensive, but a more affordable $2-4 per marker. 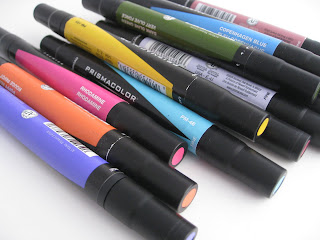 I would like to try Copics to see if they are better than Prismacolors.  Of course, after the investment I've made in Prismacolors, I do NOT want to fall in love with a similar yet more expensive product!

Here is a drawing using Prismacolor Premiers that I did last year when I was a KidzArt instructor: 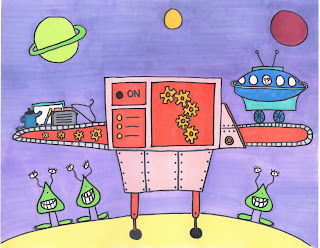 To get an idea of what the Prismacolors can do, you need to know that this is a large piece of paper... around 12" x 18".  Can you imagine coloring a drawing that size with ordinary water-based markers?  There would be tons of streaks, and if you went over them, the paper would pill.  The marker would probably run out and need resting halfway through the project.  I do have streaks on my project in the purple area, but that's my fault, not the markers.  I could have gone over those areas again and again until they were filled in properly.  Look at all the other colors- beautiful coverage and no streaks.

I feel like I am just beginning to learn what these markers can do.  I only have about 20 (out of the 300ish colors they make), so I haven't been able to experiment with using a family of colors to do shading.  Hopefully soon!

Have you tried Copics and/or Prismacolors?  What do you think of them?
Email ThisBlogThis!Share to TwitterShare to FacebookShare to Pinterest
Labels: Products I Love