A few months ago, I came across Amanda's Cookin' and her version of Watermelon Cookies.  I thought there were adorable and decided to use them as inspiration to make my own version.  The first thing that struck me is that her recipe used food color to achieve the red and green of the watermelon, but she didn't add any flavor.  I wanted to see if I could make a fruity version of the cookie to enter in the county fair.

I vaguely remembered reading a culinary mystery a few years ago where the heroine added Kool-Aid powder to her sugar cookies.  A quick google search revealed that it was in JoAnne Fluke's Apple Turnover Murder.  I decided to use one of my favorite sugar cookie recipes and experiment with adding Kool-Aid powder.

One problem- I hate artificial watermelon flavor.  I want nothing to do with watermelon Jelly Bellies, watermelon Jolly Ranchers, or the watermelon version of any other candy that I like.  So I bought some Cherry Kool-Aid powder.  I also bought Lemon-Lime, hoping it would be the right green for the 'rind' of the cookies.

The first version of the cookies were absolutely adorable. 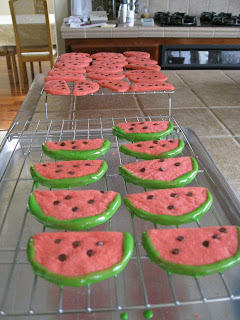 Our friends Karl and Gayle came over for lunch and I served my watermelon cookies.  I've known Karl for almost 20 years and Gayle for just a little less, so they are totally accustomed to acting as guinea pigs for my culinary experiments.  Most importantly, they know that honest feedback is important and that negative comments won't hurt my feelings at all.  Karl jumped right in with the comment that the green glaze was so sour it was almost inedible.  Steve and Trevor agreed, while Gayle and I kinda liked the extremely sour taste.  Maybe it was a male/female thing?  I brought some cookies to my parents and sister.  Nope- not a male/female thing, as they all thought they were unbearably sour.  Hmm.... time to tinker.

I made a second version of the cookies for Trevor's Zoo Party.  Watermelon cookies didn't fit the theme, but it was the best way to have 20 people give me feedback all at once.  I made the lemon-lime glaze much less sour and tinkered with the cherry a bit.  Everyone agreed they were adorable and that the glaze was good, but this time there were mixed reviews about the cherry cookie.  About half the people liked it, while the other half felt like it was a major disconnect to have something that looks like a watermelon taste so blatantly like cherry.

A quick search revealed that Kool-Aid doesn't make a watermelon version.  They used to make an "invisible" one (meaning no added color), but it's no longer made and wouldn't yield the color I wanted anyway.  I decided to try their Tropical Punch, thinking the blend of flavors might read 'watermelon' better than the cherry.  Here are the cookies just out of the oven: 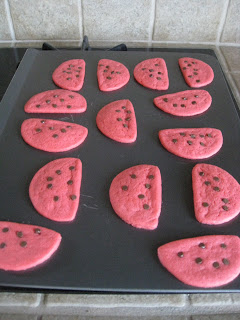 I really liked the Tropical Punch flavor!  Here they are moments after I glazed them: 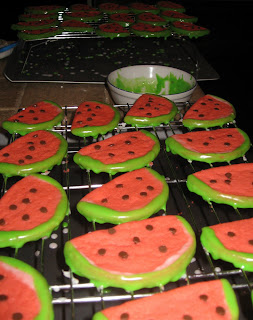 You have to submit 7 cookies to the fair, so I chose the best ones to turn in: 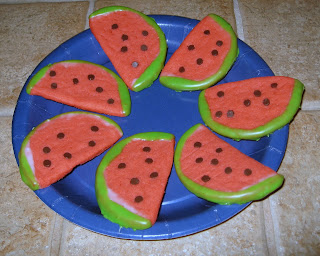 And here they are at the fair- second place! 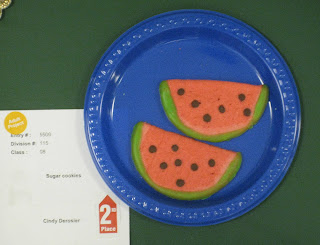 Thoroughly combine Tropical Punch Kool-Aid, sugar, and butter. Add egg and mix well. Add salt and baking soda. Add the flour in ½ c. increments, mixing after each addition. Roll out dough between sheets of plastic wrap to a thickness of approximately ¼ inch. Refrigerate dough for at least one hour.

Remove dough from plastic wrap. Use a biscuit cutter to cut circles from the dough, then use a knife to cut each circle in half. Transfer to an ungreased cookie sheet. Arrange mini chocolate chips on each semicircle so that they resemble watermelon seeds. Bake at 325 for 10-12 minutes. Let cool on baking sheets for 2 minutes, then remove to a wire rack.

While cookies are cooling, make white glaze by mixing powdered sugar with milk. Carefully drizzle glaze over the curved edge of the cookie, going in about ¼ inch from the edge. Let cookies sit on wire rack for 15 minutes or until the glaze sets.

Make the green glaze by combining powdered sugar, milk, and lemon-lime Kool-Aid powder. Carefully drizzle glaze over the curved edge of the cookie, covering about half of the white glaze. Let cookies sit on wire rack for 15 minutes or until the glaze sets.