I never get tired of scrapping egg dyeing, pumpkin carving, gingerbread making, or other holiday traditions.  Even though these happen annually and the pictures can look pretty much the same from year to year, I still look forward to scrapping them.  I don't worry about the layouts looking similar over the years.  Even if they are, they aren't next to each other in the albums, so it doesn't bother me.

It's a bit different with some of our vacation photos.  My inlaws own a cabin in Bear Valley, California.  2011 was the first time since I've been in the family that they didn't rent it out during the winter.  We took advantage of the free lodging, going to the cabin in January (a winter wonderland), April (just following a record snowfall that nearly covered the 3-story cabin), and Father's Day weekend (still quite snowy).

In my mind, the trips were extremely different from one another.  We brought along family friends in January, invited Trevor's godmother in April, and just the three of us went for Father's Day.  The weather was different and we did different things each time.  However, the photos from all three trips look fairly similar- a whole lot of pictures of us sledding and enjoying the snow.  And the trips were close enough together that the pages would be in the same scrapbook.  My goal was to make the three pages distinct enough that it wouldn't seem like I'd scrapped exactly the same thing three times.

Here's the page I did following the January trip, which I talked about in this post: 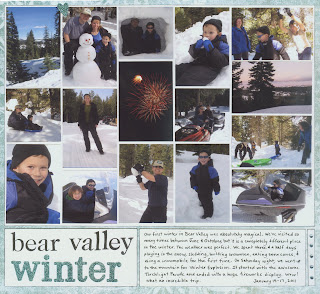 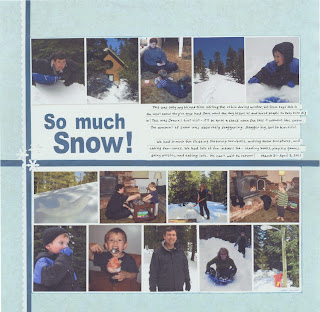 And here is Father's Day: 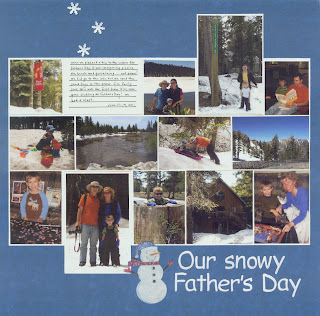 Even though I used blue for each of the three layouts, I used various shades of blue.  I chose pictures that emphasized the differences between the trips, and laid them out differently.  The fonts, journaling style, and embellishments are different on each.  I didn't repeat any title words.  I think the three layouts are as distinct as the three trips were.

How do you keep things fresh when you scrap similar-looking photos from different events?