We have a rabbit named Trouble. We didn't choose that name- it's the name the rescue organization gave to him. When we went to the adoption event, he was the friendliest, most curious, and most active of all the rabbits. This should have been a clue....

To be fair, we did ask why he was named Trouble. All the other rabbits had human names- Grayce, Timmy, Joey, etc. And then, Trouble. The fine women from Contra Costa Rabbit Rescue assured me that he was just more curious and active than average- definitely not trouble.

When we brought him home, he was definitely active and definitely curious. In my first blog post about Trouble, I said he reminds me of a silent toddler - bursts of high energy with naps in between, into EVERYTHING, and riveted by anything new or different. For the first few months, he caused absolutely no trouble. 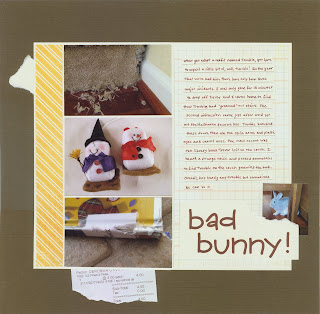 ... one day, about 4 months after we brought Trouble home, I dropped Trevor off at school, came home 15 minutes later, and discovered a significant pile of carpet bits on the hardwood floor beneath the stairs. Bad bunny!

A few weeks after that, Trevor and I put out Halloween decorations. We didn't realize that Trouble would climb the stairs, squeeze his head through the railings, push the decorations to the ground, and race down to investigate. Before I knew what had happened, Trouble had eaten the stick arms and the plastic eyes and carrot noses off the decorations. Sigh.

Not too long after that, Trevor left a library book on the couch. Later that day, I heard a strange noise and found Trouble on the couch, gnawing on the library book. Bad bunny!! We learned our lesson. Fortunately, it was only a $4 lesson, as I caught him before the book was too badly damaged.

And that's it. In the 11 months we've had Trouble, he's only caused trouble a few times. 99.9% of the time he is a perfectly behaved bunny. He ignores cords, doesn't chew baseboards, has never gnawed on table/chair legs, and uses his litterbox without fail. He knows which areas of the house are off-limits to him. (This doesn't stop him from going in those areas- it just means that when he goes in a forbidden area, he sneaks over and nudges one of us to let us know he's there. Then he zips off to explore. It's actually pretty funny.) All in all, he's totally awesome.

And adorable. Here's another layout I made recently about Trouble. 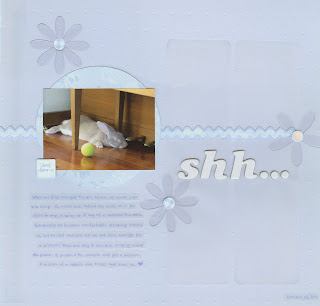 When we first brought Trouble home, we never saw him sleep. He would hide behind the couch or in his igloo to nap, leaping up if any of us entered the room. Eventually he became comfortable sleeping around us, but he still wouldn't let me get close enough for a picture. Then one day I saw him sleeping under the piano. I grabbed the camera and got a picture. A picture of a rabbit who trusts and loves us.

The layout is based on this sketch by Shannon White. 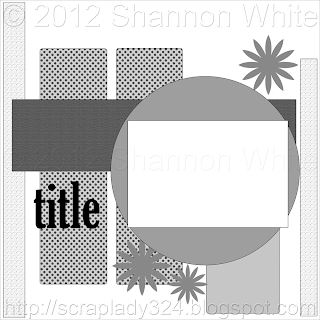 It's hard to tell, but I included all of the elements on my layout. I used vellum for the various shapes. Unfortunately, vellum doesn't scan well. But there's nothing like it for creating a page with a soft look.

Any rabbit owners or lovers out there? Have I convinced anyone to consider adopting a rabbit? I hope so! Rabbits are awesome.
Email ThisBlogThis!Share to TwitterShare to FacebookShare to Pinterest
Labels: Layouts, Rabbits, Sketches