It's been almost 9 months since I turned 40 and I'm making great progress with my list of 40 Things!  This week, I accomplished Goals 33 and 34 within a few hours of each other.  I'll tell you about Goal 33 (and how it relates to the Rotato) on Monday.  Today, it's Goal 34 - trying chess pie.

Chess pie is a beloved Southern dessert.  It is also known as vinegar pie.  Basically, it is a single-crust custard pie with vinegar and cornmeal in the filling.  Intriguing!  There are a few different interesting theories as to where the name chess pie came from.  This article by Southern Living has a good summary.

Chess pie is virtually unknown outside of the South.  I first learned about it when President Clinton was in office and mentioned that it is among his favorite foods.  When I made my list of 40 Things, I knew I wanted to try chess pie.  After nearly 9 months of actively looking for it in restaurants and bakeries, both around here and as I've traveled, I realized that if I was ever going to try chess pie, I'd need to make my own.

I read through at least two dozen recipes and articles about chess pie and learned that there are several different varieties.  The tastiest-sounding were the citrus versions (lemon, clementine, and tangerine are all common variations), but decided that to really understand chess pie, I should try the classic.  Here's the recipe I used, also by Southern Living.  I followed the directions precisely.  My finished pie looked like this: 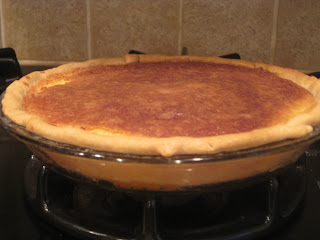 I've been making an effort to include as many different people as possible in my goals, so rather than serve it to my family, I brought it to our MOMS Club brunch. But first, I had some fun. I posted the following on Facebook:

I baked a popular Southern dish that is mostly unknown outside of the south. I first heard about it when Pres. Clinton was in office and he mentioned that it was one of his favorite foods. I'm super excited to try it. I'm curious- with no information other than that, would you be willing to try it with me?

It was fun to see who was willing to try it, no questions asked!  It was also fun having my Southern friends try to guess what I was talking about.  The friends who'd be at brunch were (with one exception) totally open to trying it, whatever it might be.  There were various suggestions about blindfolding them before they tried it, but I decided that wouldn't be necessary.  Instead, I ambushed each person as she arrived, pushed a plate toward her without telling her what it was, and took her picture as she tried it.  I'm glad my friends are such good sports.
Our hostess Sheena doesn't eat eggs, so she was in charge of taking my picture.  Here I am, trying my first bite of chess pie. 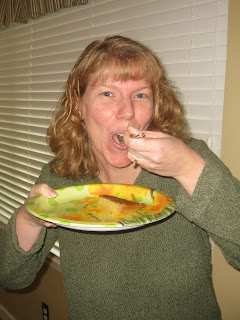 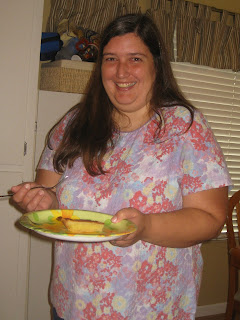 Miriam loved the chess pie and went back for seconds. 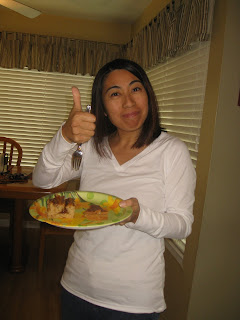 Courteney and Rina both liked it enough to finish their pieces. 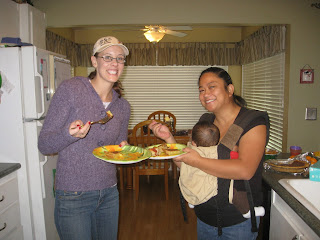 Kelly was barely in the door before I made her try a piece. 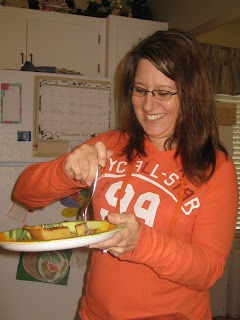 Not a single one of them had heard of chess pie before.  After everyone had tried it, the consensus was that it was fairly tasty.  Some really liked it, most thought it was ok.  One person declared it "acceptable."  There were positive comments about the mild sweet corn taste (and negative ones about the slightly gritty texture).  No one could taste the vinegar.

Thanks to Kristen, Miriam, Courteney, Rina, and Kelly for playing along!  (And Sheena for hosting!)  I think next month when we get together for brunch, I'll bring some lemon chess pie....
Email ThisBlogThis!Share to TwitterShare to FacebookShare to Pinterest
Labels: 40 Things