Back in my teaching days, our school had Space Week each December.  The whole school got into it and we had so much fun.  It was definitely one of my favorite weeks each year.  My 5th grade students did an in-depth study of our solar system, then each wrote and illustrated a children's book.  They then read their books to the K-2 students.  I really regret not scanning (or at least photographing) my students' work.  Some of the books were stunning and incredibly impressive for 5th graders.

There are a lot of things I miss about teaching.  Space Week is one of them.  So even though I have a zillion things to do this month, I pushed all those commitments aside and volunteered to plan and run an Astronomy Night for our Cub Scout Pack.  I planned the evening around the three requirements the boys needed to do to earn an Astronomy belt loop:

We started the evening with Space Bingo.  I took the 14 terms from Requirement #3 and added 11 more space-related terms to make 25-item bingo cards.  However, this wasn't ordinary bingo.  I didn't call the actual word- I read its definition and the boys had to figure out which word to mark on their cards.  By the end of 5 rounds of bingo, the boys were fairly confident with what each term meant. 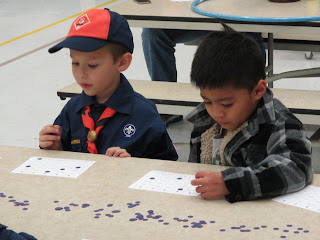 Next, I divided the boys into two groups.  One group headed outdoors with Steve and his telescopes.  Steve is an extremely knowledgable amateur astronomer and was able to share so much information with the kids.  We were blessed with a beautifully clear night and a great view of Jupiter.  The kids loved it.  Each boy had plenty of time to practice focusing a telescope (Requirement #1).

Meanwhile, I stayed inside with the second group.  I used the boys to create a living model of the solar system.  One boy, representing the sun, stood still in the center of the room holding a big hula hoop over his head.  Another boy, holding a globe, rotated and revolved around the sun.  We talked about what each rotation represents (day/night) and what each revolution means (a year).  We added a moon (holding a ping pong ball), who revolved around the earth while the earth was revolving around the sun.  We talked about what each moon revolution represented (a month).  The remaining boys represented other planets in the solar system. We talked about our living model, then drew a diagram on paper (Requirement #2).

Finally, we discussed what astronauts take with them into space.  They quickly mentioned there is not a lot of room to pack.  One way to conserve space is to pack dehydrated food.  I told the boys that we'd be having a pretend space launch at the end of the evening and that they'd each be packing a dehydrated snack.  Each boy carefully measured 2 T. of a mystery dehydrated substance into a baggie.  They were dying to know what they'd be eating! 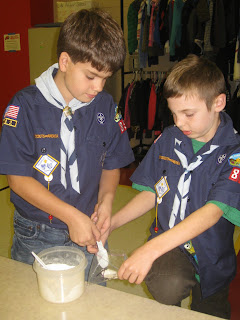 After each group had done all the indoor and outdoor activities, we came together for a game of True/False tag.  I explained to the boys that I'd say a sentence using one of the 14 key terms from Requirement #1.  If it was true, they would run one way.  If it was false, they'd run the other.  Each team tried to tag the other members.  They boys loved it and it really reinforced the information they'd learned during the bingo game. 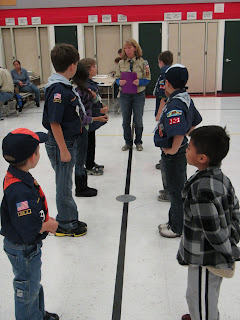 Next up was an award ceremony.  All of the boys successfully met the three requirements, so they each received their Astronomy belt loop.  Hurray!

Finally it was time for our snack, but first we had to pretend to blast into space.  We talked about the fact that water is a by-product from the fuel cells on the space shuttle.  We also discussed the difficulties of pouring water in an environment without gravity.  So instead of pouring the water, the boys had to use the syringe to suction it and carefully add it to their mystery snack. 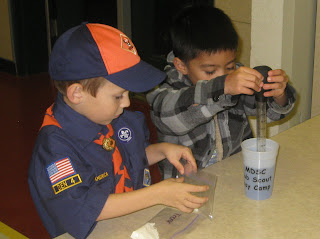 They zipped their bags closed and kneaded it to rehydrate the mystery food.  Then we snipped the corner off each bag and they slurped their food.  At this point, most of them still had no idea what they were eating!  In fact, if a big sister hadn't told them, I don't think any of them would know that they were enjoying vanilla pudding. 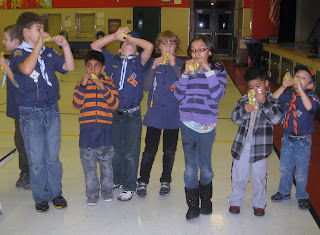 What a fun night!
Posted by Cindy deRosier at 5:00 AM