As you might recall, we held a family Cupcake Wars competition back in September.  Trevor and I picked 12 ingredients and printed each on an index card.  We taped a grid onto the floor and put an ingredient in each box.  One by one, we tossed beanbags into the grid to determine what each of our secret ingredients would be, then we each made our cupcakes. Trevor ended up using two additional secret ingredients for his final cupcake, which left four ingredients in the grid after our competition.

Grandma came to visit the next day.  Trevor was so excited to show her the grid of ingredients and to have her taste the cupcakes we'd saved for her.  He suggested Grandma try throwing beanbags to see what her mystery ingredients would be.  When hers landed on pineapple and grape jelly, she said she would accept the challenge.  She hasn't delivered her cupcakes yet, but we patiently await them. 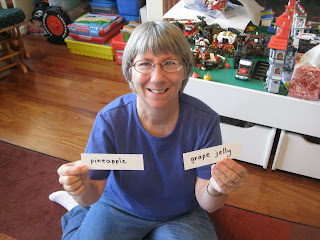 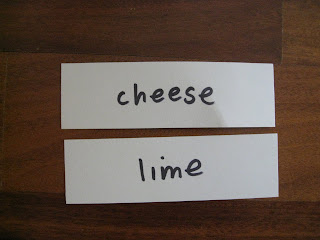 I asked my mom to take the two index cards plus a lime and a chunk of cheese and leave them on my sister's doorstep with no explanation.  Mom agreed, but said there was no chance that Kari was going to accept the challenge, as she hates lime, the rest of her family won't eat cheese, and they were leaving on vacation within a week.  Mom was correct.  Kari had no interest in making a lime and cheese cupcake. Drat.
Over the next few weeks, I thought about the lime and cheese challenge on and off.  I couldn't let it go- I really wanted to see if it was possible to make a yummy cupcake featuring both lime and cheese.  So I decided to try.  Of course, I could have gone the easy route and used cream cheese or mascarpone or even ricotta.  But that isn't much of a challenge and not in the spirit of Cupcake Wars.  So I used this: 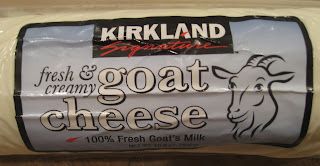 Again, I could have taken the easy route and incorporated the goat cheese into the frosting. But no.  I wanted to see if I could include it successfully in the cake itself.  My plan was to make a basic yellow cake batter, cut the goat cheese into small pieces, and mix the pieces into the batter.  I thought it would bake up sort of melty and swirly.  I zested some lime into the batter and baked.  The cupcakes came out of the oven looking and smelling good.  I immediately brushed the tops with a lime syrup I'd made while they were baking, then I set them aside to cool.


I make a very good lemon buttercream frosting, so I substituted lime juice and zest for the lemon in my usual recipe.  Then I candied some lime slices for garnish.  Here's the finished lime and cheese cupcake: 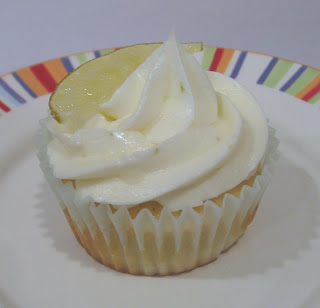 So, how did it taste?  Well, let's just say that the frosting was fantastic but the cupcake itself was definitely not.  While I'd expected the goat cheese to melt and swirl, it actually dried up into chalky little chunks that clumped up in the otherwise tasty cupcake. 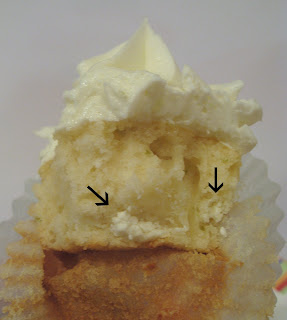 Eaten on its own, the cake part was not very good.  However, the frosting was excellent and did a good job of masking the weird cake when eaten together.  All in all, a fun experiment! I'm just glad I didn't actually get lime and cheese for our original Cupcake War, as I would have lost for sure.  (Oh yeah... I lost anyway....)
Email ThisBlogThis!Share to TwitterShare to FacebookShare to Pinterest
Labels: 40 Things, Cooking Competition