Ready for another Flamingo Four?  This month, three other members of the Flamingo Scraps Design Team and I each received the following four items: 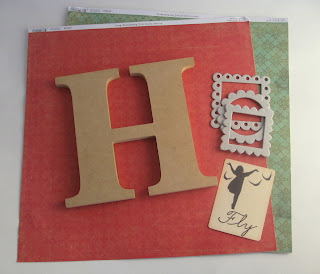 When I opened my box, I immediately starting thinking of my friends and family. Is there anyone, ANYONE, on my gift-giving list whose name starts with H that would inspire my project? Nope. Rats!

A little behind-the-scenes info. In my job as Flamingo Four coordinator, I schedule the designers, set deadlines, and write the final post, but I don't have any input whatsoever into the four items we use each month. When my package arrives, it's as much of a surprise to me as it is to the other three. I was chatting with one of the other designers after receiving our packages and learned that she didn't have an H. Nor did she have a "Fly" card. Turns out we all had different letters and different cards, each assigned randomly. Well, it turns out that the other letters would have been so much easier for me. Double rats!

My ever-so-helpful family helped me brainstorm H-words. Helicopter? Hernia? Hamburger? Maybe hippo, hand grenade or horticulture? Trevor, inspired by the "Fly" card, drew a picture of a hot air balloon holding up an H where the basket would be. Somehow, that did the trick. I had my idea. I ran up to the craftroom, dug through my alphabet collection, and came up with this: 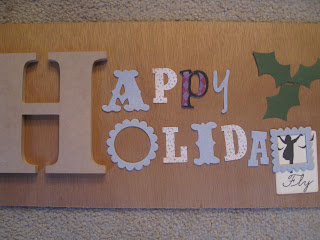 Steve cut down the background board for me while I painted each of the letters a chocolate brown. While those were drying, I added a quick whitewash to the background board. I trimmed the Crate Paper to frame my piece, then punched out circles to back the O and to use as holly berries. I trimmed down the "Fly" card so that the girl's body formed a Y.

I imagined this hanging at our front door, so I used multiple coats of Outdoor Mod Podge to glue and seal each element. See how shiny?

I'm really happy with how this turned out. Want to see what the other three designers did with the same four items (except easier letters than H)? Head to Flamingo Scraps to check out their projects!
Email ThisBlogThis!Share to TwitterShare to FacebookShare to Pinterest
Labels: Christmas, Flamingo Four