Last Christmas, I bought Trevor a "Can You See What I See?" puzzle. He loves Walter Wick's books (affiliate link here and below) and he loves puzzles, so he was really excited when he unwrapped it. When he dumped out the pieces, we were both shocked by what we saw. Dozens of bent pieces. Many pieces with the picture de-laminated from the back. Pieces that looked like they'd been stepped on.

This was not a cheap dollar store puzzle. It was not a thrift store find. This was a brand-new, perfectly packaged $10.99 puzzle. This was a puzzle that should have lasted for decades. Instead, it was utter garbage.

I immediately contacted the manufacturer, an American company who I won't name (though I will say it begins with a C, so that no one mistakenly thinks I'm referring to any of the many awesome puzzle manufacturers). They offered to replace the puzzle. And then I didn't hear anything for over a month. I contacted them again. After 8 more weeks, the new package arrived. We opened it... um, wow. Instead of a 300 piece "Can You See What I See?" puzzle, Trevor received a 150 piece puzzle with pastel cats on it.

Now, I'm sure there are school-age boys who like pastel cats, but Trevor isn't one of them. I called the company again and demanded a refund. They ignored me. I called, emailed, and mailed a copy of my email to their office. At that point, they told me that they only do wholesale, so they can't issue refunds. The store where I bought it wouldn't do a refund either. Eventually (when they realized I wasn't giving up), the company offered a replacement puzzle. Again. In May, 5 months after Trevor had opened his Christmas gift, he was finally able to do the puzzle I'd bought him.

So what's my point? Well, when I finally received a satisfactory replacement puzzle, the company told me to keep the damaged puzzle. I weeded out the 80+ pieces that were completely mauled and put the remaining ones into a Christmas tub so that we could use them for crafting. Today I'm sharing our first puzzle piece craft. 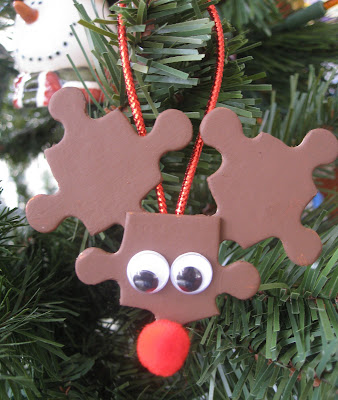 Sand the front of each piece to remove the shiny gloss. The piece on the left has not been sanded; the one on the right is perfect. 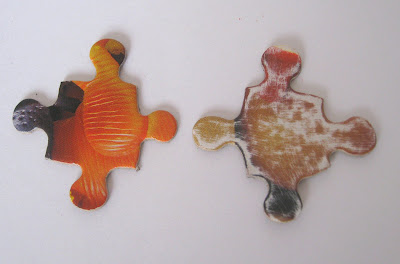 Paint the pieces brown and let them dry. It will probably take two coats. Glue the border piece on top of the two inner pieces. 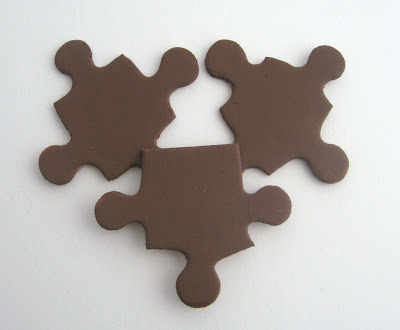 Add googly eyes and a pom pom nose. Glue the cord in the back between the two antler pieces. 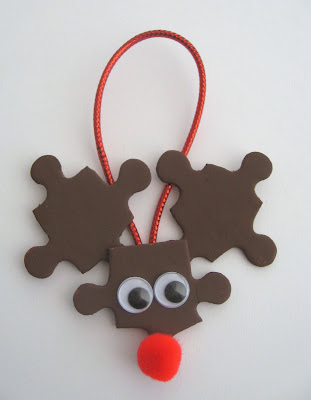 Here it is, hanging on the tree.

I love our finished reindeer. At least some good came from one of the worst customer service experiences of my life!
Email ThisBlogThis!Share to TwitterShare to FacebookShare to Pinterest
Labels: Christmas, Crafts for Kids, googly eye, ornament, paint, Plaid, pom pom, puzzle, reindeer