About a week ago, I saw some adorable cinnamon stick tree ornaments made with fabric scraps on the Cosmo Cricket blog.  (Click here to see them.)  Since I have a huge vase of cinnamon sticks just waiting to be turned into a fabulous craft, I decided to make my own version of these trees. 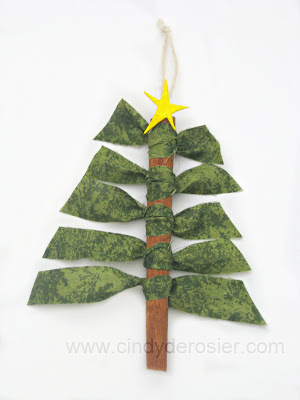 
If the cinnamon sticks you have are longer than 6", trim them with a hacksaw (pruning shears shatter the cinnamon rather than making a fresh cut). If the cinnamon does not have a strong scent, gently sand each stick with fine-grit sandpaper.

Paint the stars yellow. After a few minutes, add a coat of yellow Stickles, then set them aside. While they are drying, cut strips of fabric approximately 3/4" wide and 8" long. (I didn't measure.) You'll need five per ornament. Tie the fabric strips to the cinnamon stick, making sure the right sides face front. 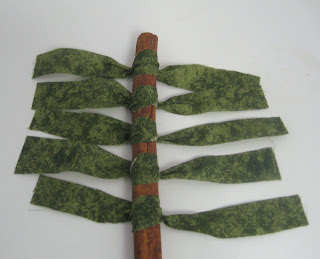 Notice how uneven the strips are? Like I said, I didn't measure. Use the scissors to cut a diagonal line to form the shape of the tree. 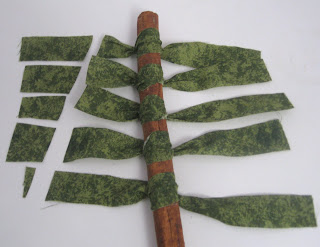 Cut a piece of twine and tie it to make a hanger. Attach the star and a hanger to each ornament using hot glue. Here's the finished ornament, which smells even better than it looks.

I'm strongly considering having Trevor make a bunch of these for family members. For any family members reading this... if you get a cinnamon stick tree for Christmas from us, act surprised. OK?