In going through my pictures, I realized I never shared the card I made for my goddaughters and their mom back in May to mark the two year anniversary of their baptisms.  I used the same chalk technique that I described here and showed here. I tore green textured cardstock, inked the edges with chestnut roan, and glued them in place to make the hills. Then I cut a 1" strip of woodgrain paper, snipped it into two pieces (one shorter than the other), and glued them together to make the cross. Finally, I glued the cross in place with the end tucked under the hill in the foreground. 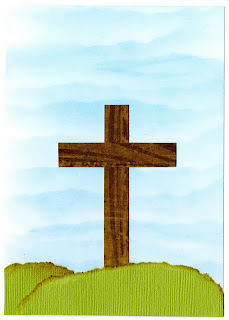 It's been a very baptism-themed week for the deRosiers, as I met my 4-month old godson Teagan for the first time last Friday.  His godfather is his cousin, Ryan. 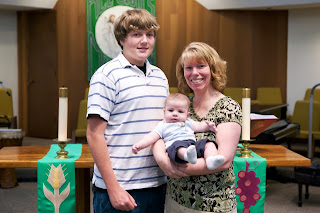 Teagan and the rest of my out-of-state relatives were in California for the baptism of Allison, my nearly 5-month old niece.  Here she is, waiting to be baptized. 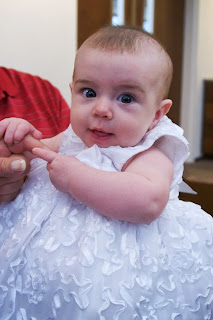 Here's the whole group, including my parents, my aunt and uncle, my sister's family, my two cousins' families, and us. 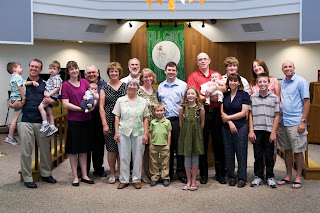 The 20 of us spent three days together at my parents' house.  Next week I'll tell you about the Family Olympics we held and why I am now unable to lift my left arm...
Posted by Cindy deRosier at 5:00 AM