Each year, Trevor enters a live tablesetting contest for 5-8 year olds at the Alameda County Fair. In 2012, the first year he was eligible, Trevor dreamed up a meal for bunnies and their owners. It was so cute and he was so proud of it. It earned him 4th place in a field of 11. Last year, he created an owl-themed tablesetting that incorporated many of his owl crafts. He'd listened to the judges' suggestions from the previous year and earned 3rd place. He was ecstatic.

This year, Trevor decided on a spider-themed tablesetting. He sketched out a plan for a spiderweb tablecloth, a spider napkin ring, spiders on a menu frame, and plastic spiders scattered around. We headed out to the fabric store. We searched through fleece prints, cotton prints, everywhere spiderwebs might be, but didn't find any. He settled on a silvery-grey with a cool wiggly print. 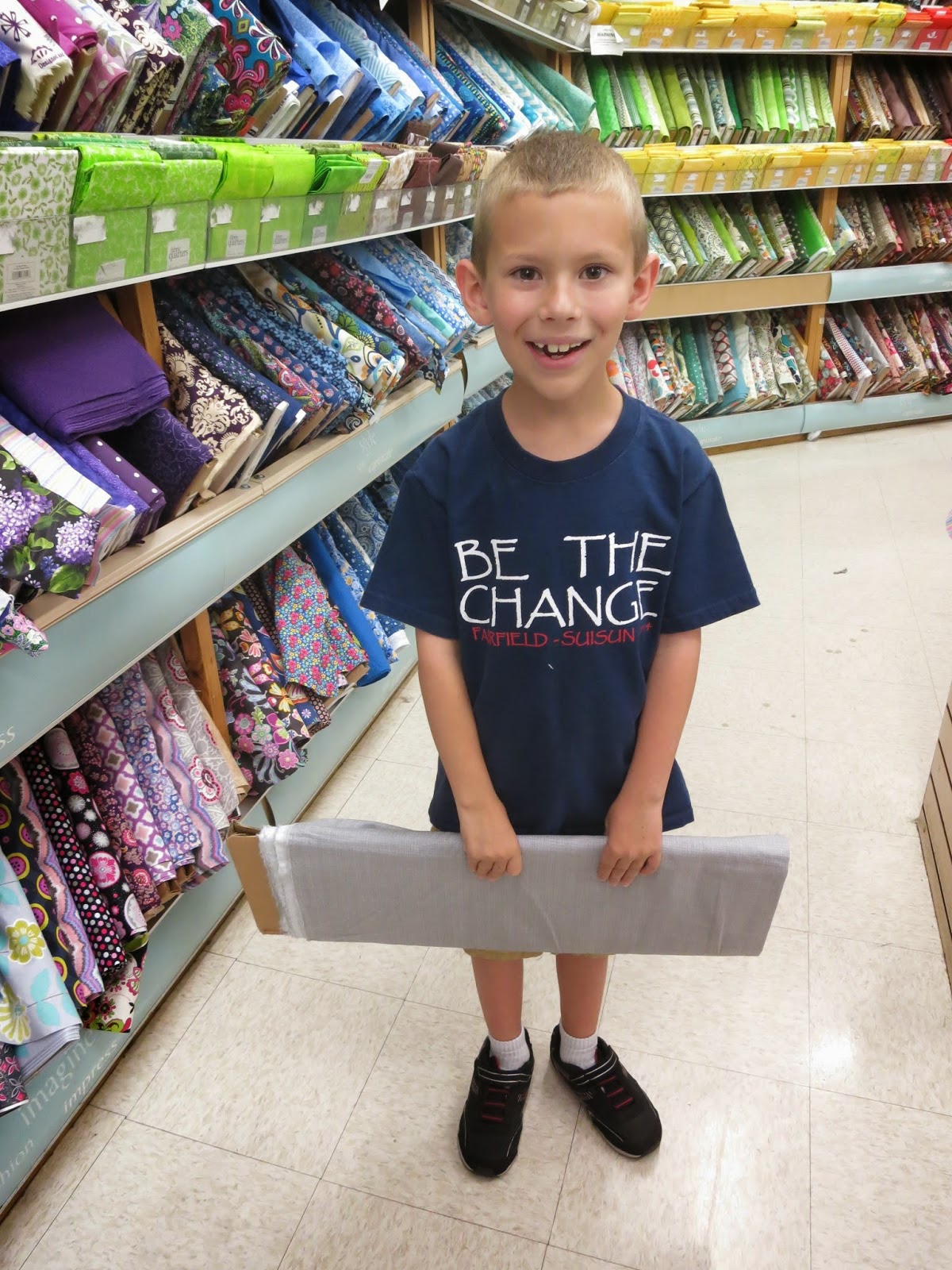 He was disappointed not to have found a spiderweb print, but was already thinking of how to make the other fabric work. We headed to the cutting station. As the employee was cutting one yard of the silvery-grey, she asked Trevor what he was making. He described his vision and said how he had to choose this because there weren't any spiderwebs. She told us that they did indeed having spiderweb fabric... in the special occasion section. We hadn't thought to look there! She led us over to the section and showed it to Trevor.  Sure enough, among the silks and velvets was a sheer, flocked spiderweb fabric. He was euphoric, as it was exactly what he wanted. 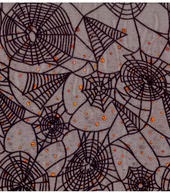 He asked for one yard. I winced as I asked about the price. $12.99 a yard, on top of the $4.99 for the silver fabric she'd already cut. Yikes. Fortunately, I had a 40% off coupon. I'd planned that it would go toward a $5 fabric so that we'd only spend $3 total. But there was no way I could say no to the perfect fabric.

Trevor bounced out of the fabric store, anxious to go home and get started. I helped him staple his grey fabric to a wooden board, then staple the spiderweb fabric over that. It looked really good. He selected dishes and silverware, then started work on his napkin ring. Here's his version of a violin spider.

Next, it was time to set his menu. I helped him search online for foods that looked like spiders (there are a lot!) and frequently asked him questions to be sure he knew about the nutrients in each. I'm constantly talking about balanced meals, so this was pretty easy for him. The hard part was painstakingly writing his menu by hand. He does not have especially neat handwriting and he does not enjoy writing. But one of the criticisms he'd gotten two years ago was about having a typed menu (as there's no way of knowing whether the child did it himself), so he wanted to be sure to follow the judges' advice. Once he wrote his menu, he painted a wood frame and used Glue Dots to attach some of his plastic spiders. 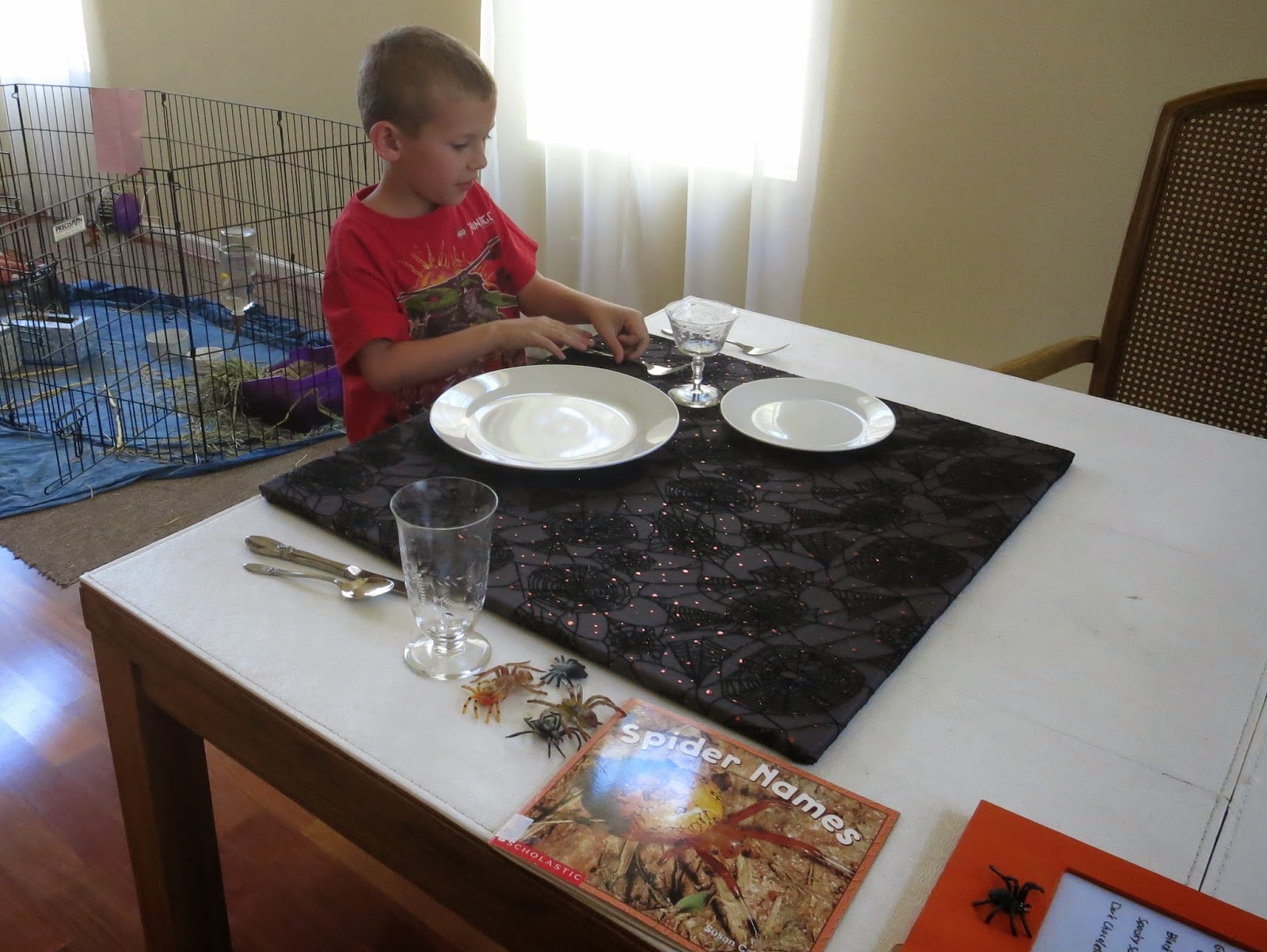 Here's how his finished tablesetting looked. He felt confident and excited. 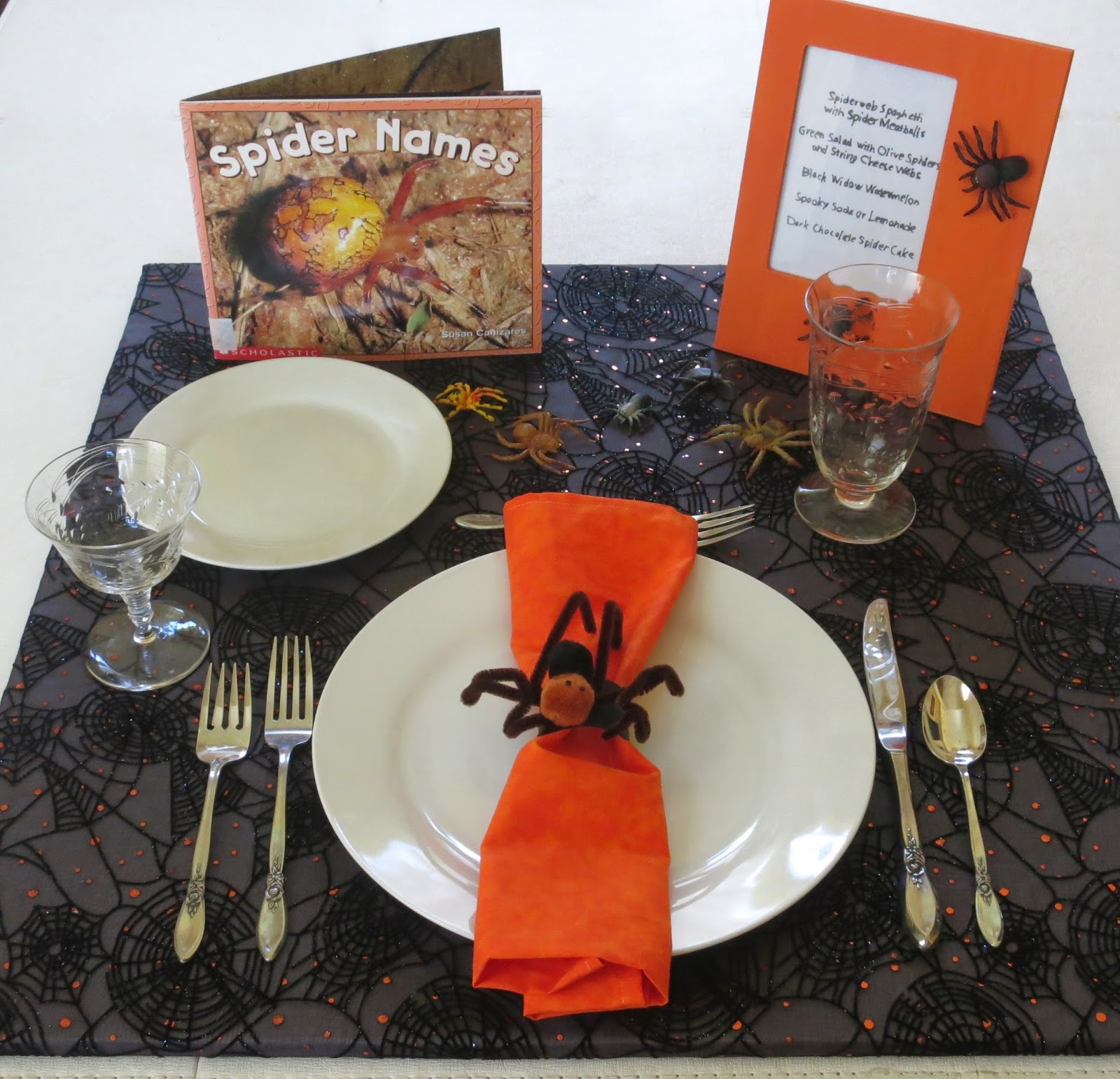 Finally, it was time for competition! There were 7 entrants spread across three tables. 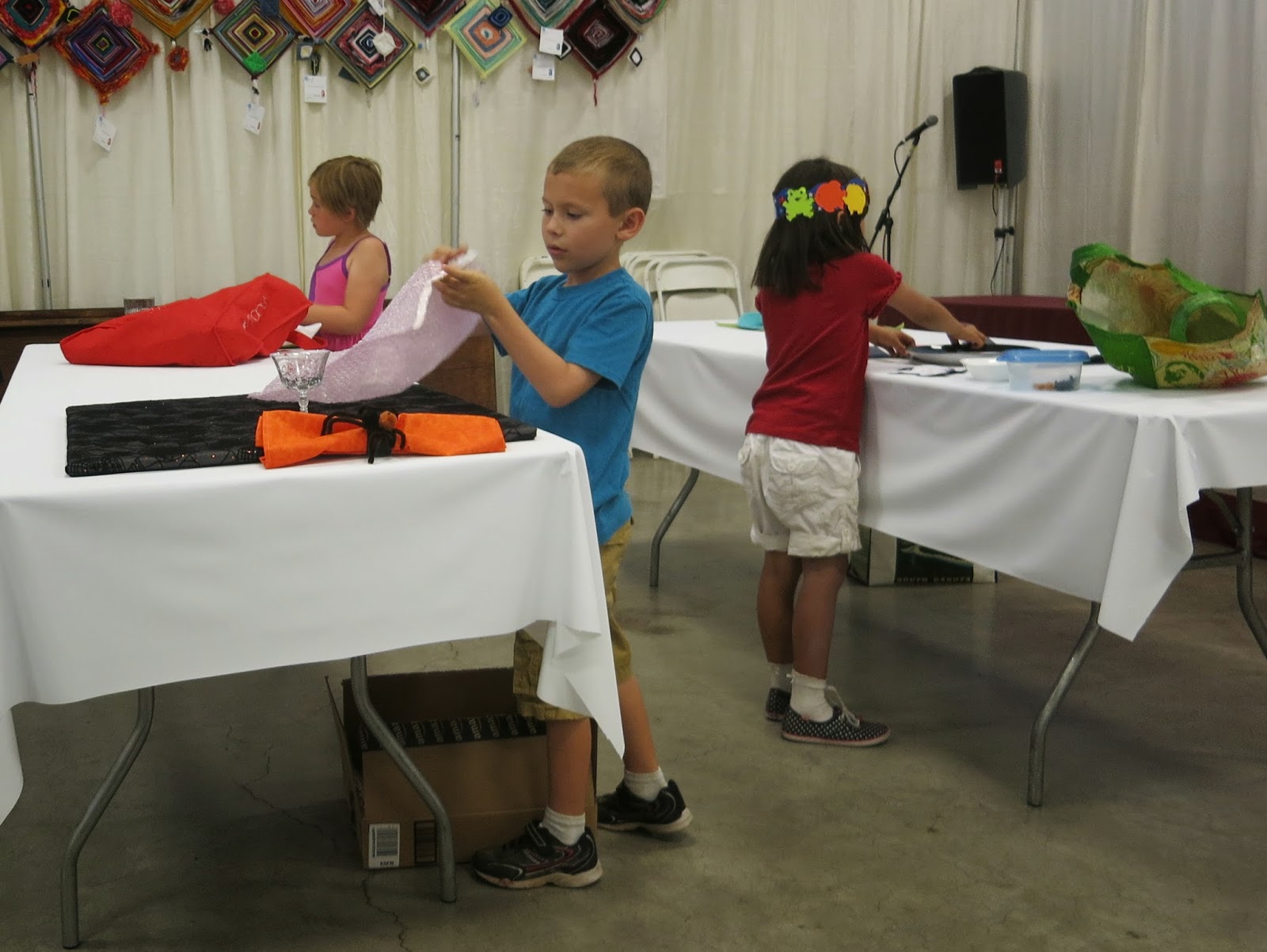 Trevor took his time and made sure everything was perfect. 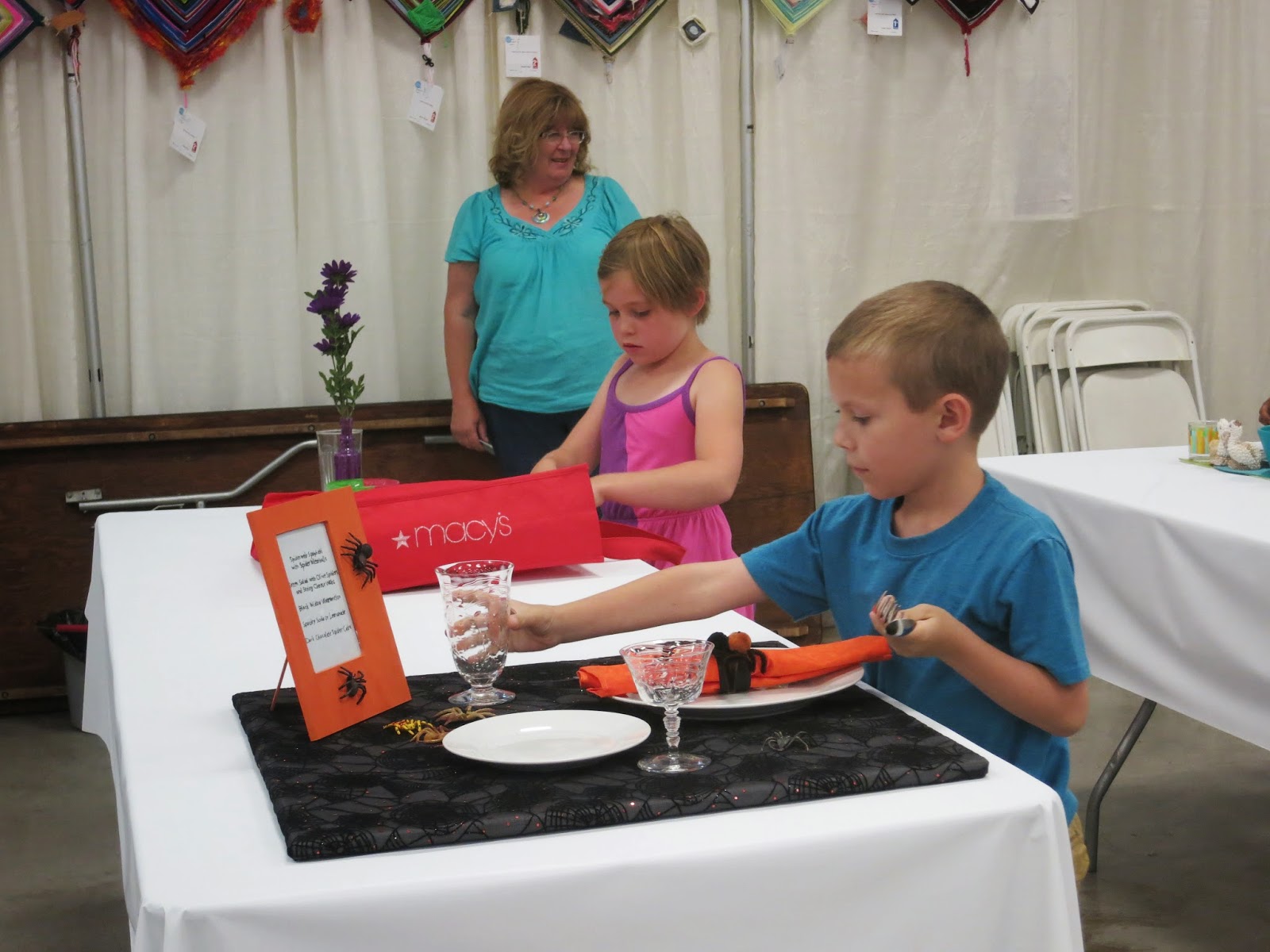 When all the kids were done, the judges called them up one by one to give a presentation about their tablesetting, something new this year. Trevor told them all about his homemade items, why he chose the theme, and how he'd tied in the menu. Unfortunately, he didn't speak loudly enough. He's comfortable on a microphone because they practice with them at school, but he thought this would broadcast much louder than it did.  t least the judges could hear. 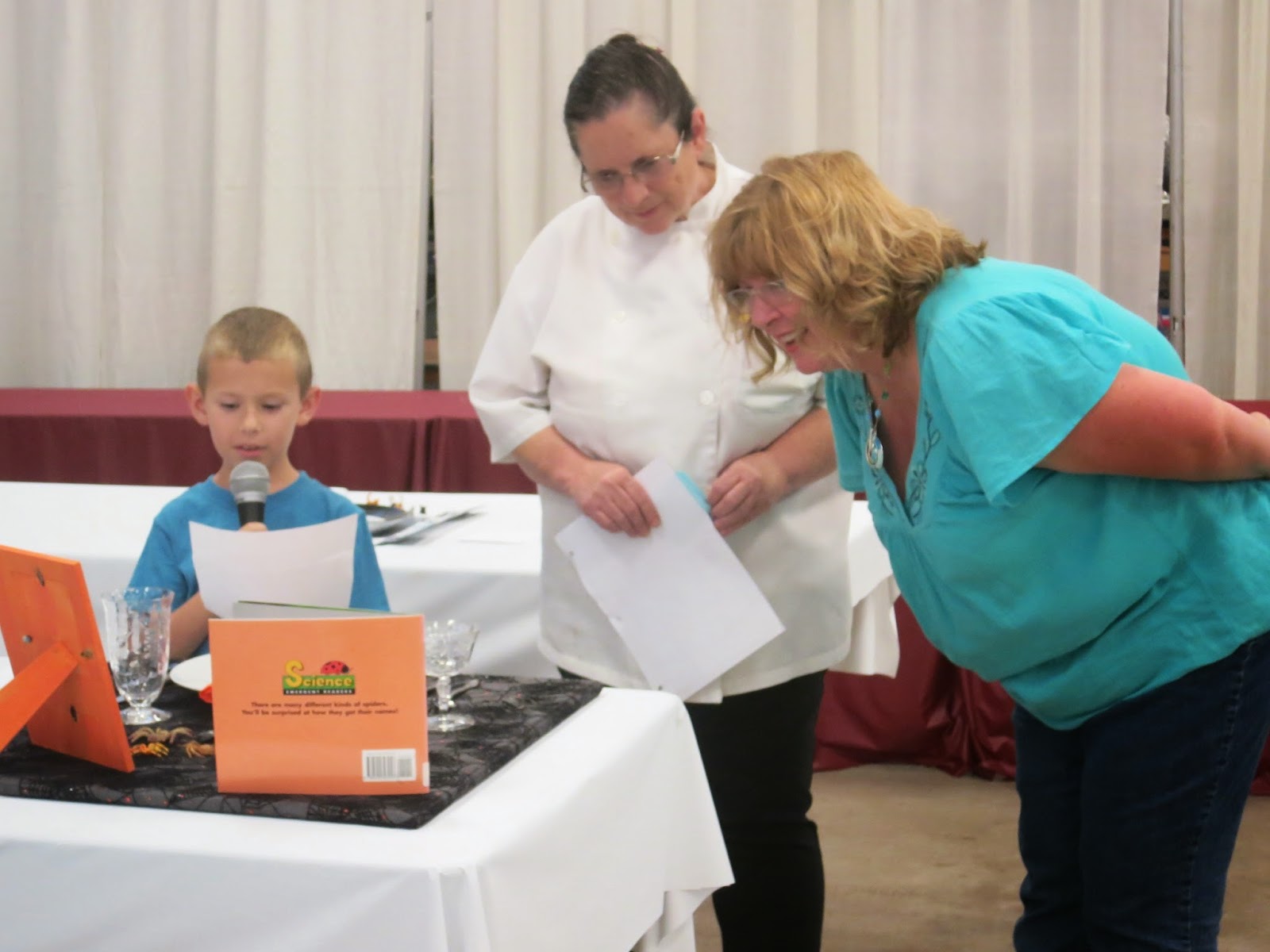 After all the presentations, the judges conferred. They awarded participation ribbons to four of the kids, which meant Trevor would place! He got third. 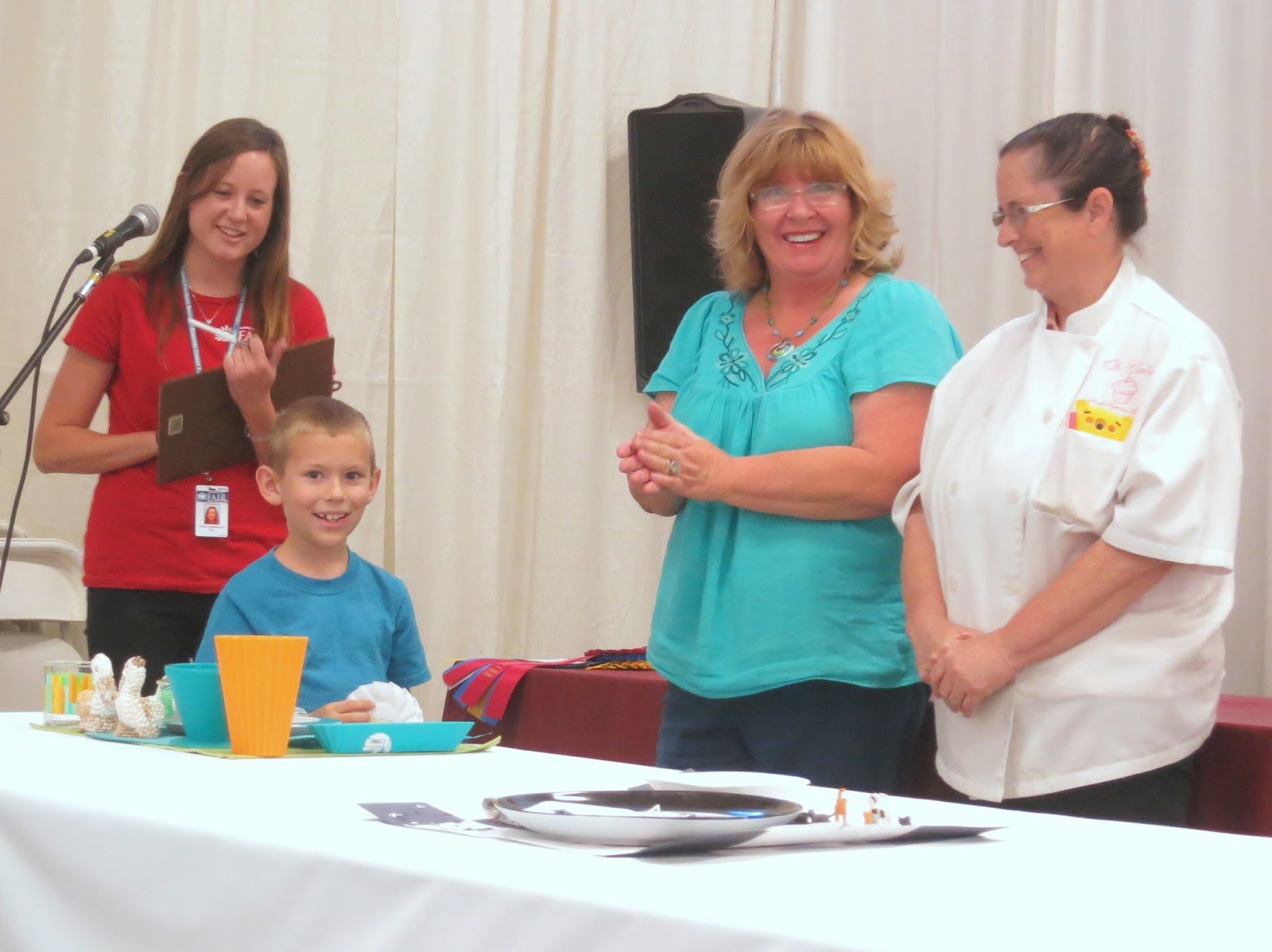 He was a bit disappointed, as he'd truly thought his was better than the second place finisher's, but he happily accepted his third place. 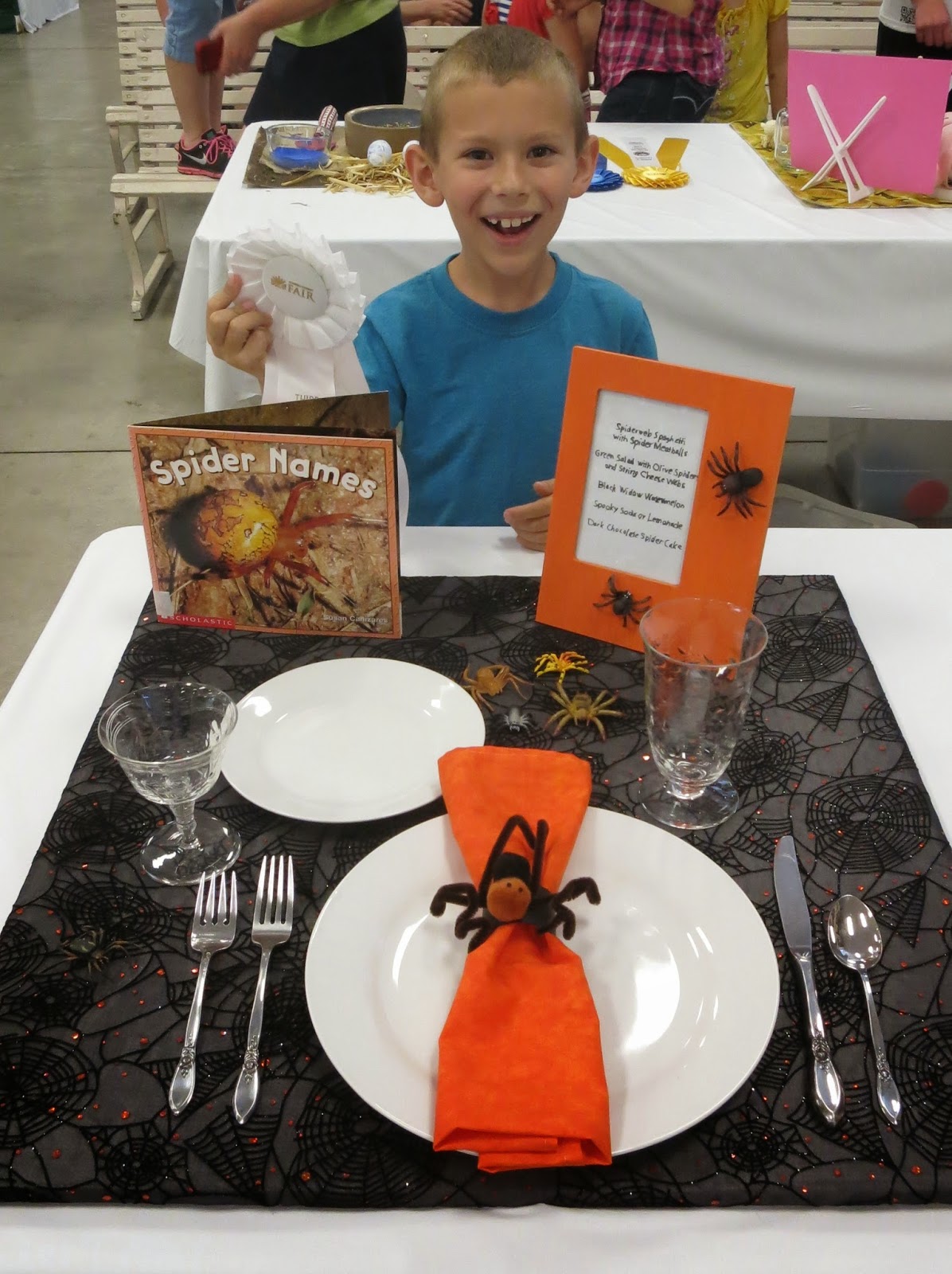 Here is the second place finisher. 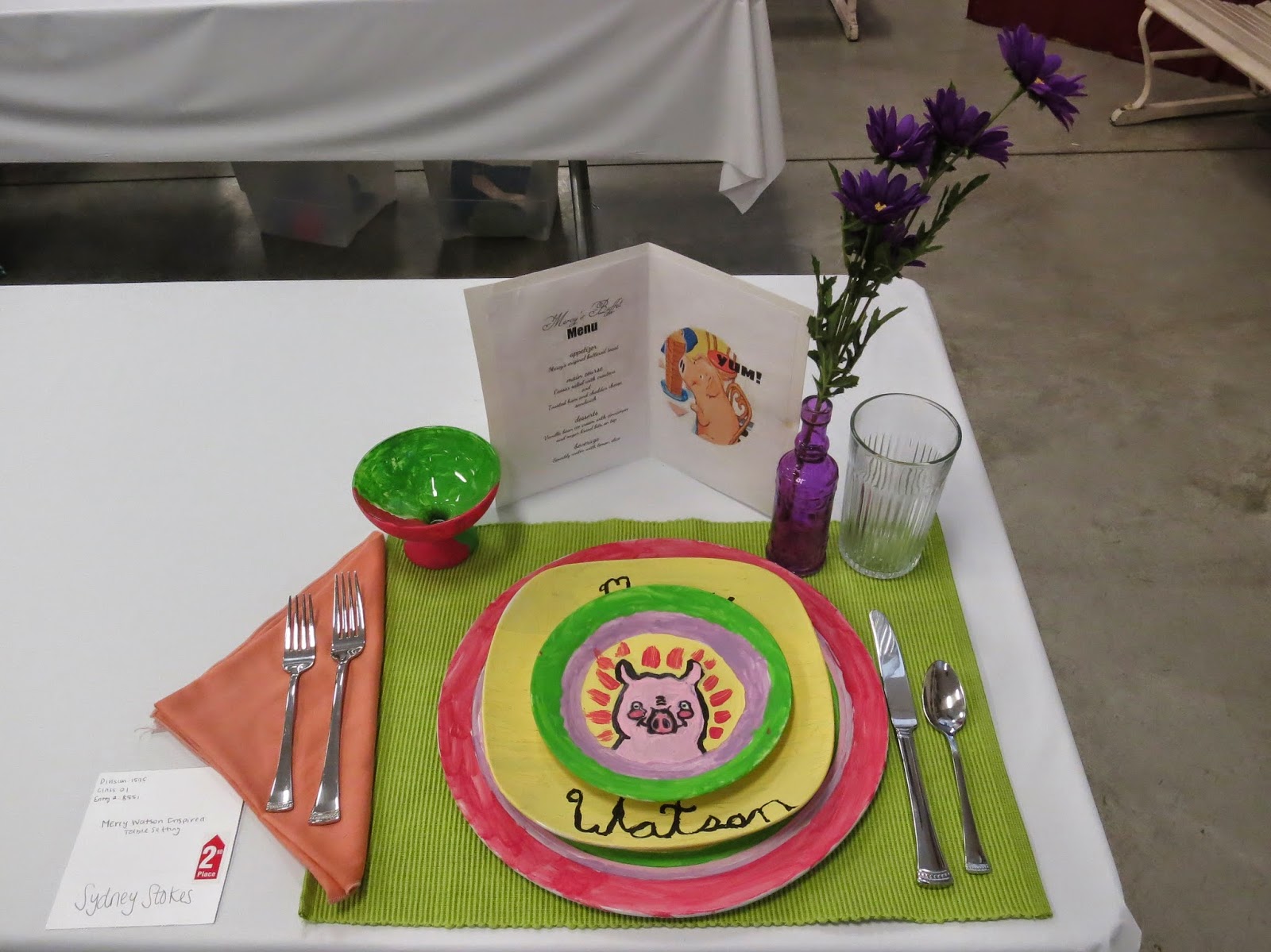 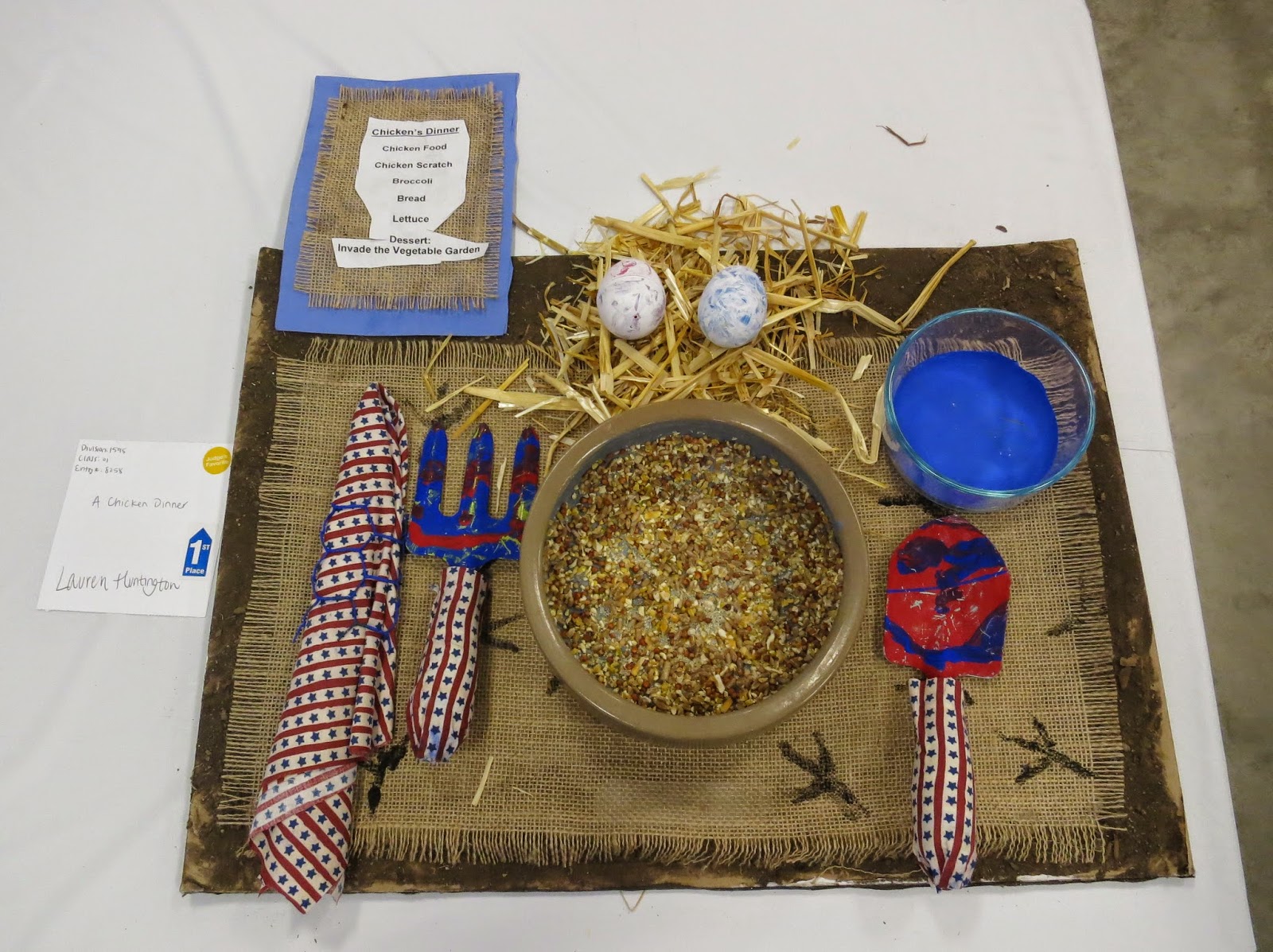 He was frustrated to see that both had typed menus when he'd spent so much time and effort handwriting his and had been penalized in the past for typing. Oh well! That's part of competition.

All of the kids did a wonderful job and I didn't envy the judges having to decide between them. Judging is really hard, and judging in front of the competitors is brutal. I've only done it a handful of times and never with kids this young. Congratulations to all the contestants for a job well done!

Trevor is already talking about his plans for 2015, the final year he qualifies to enter before he ages out. Stay tuned!
Posted by Cindy deRosier at 5:00 AM