On Saturday, we got home from a fantastic week in beautiful Lake Tahoe with my extended family. 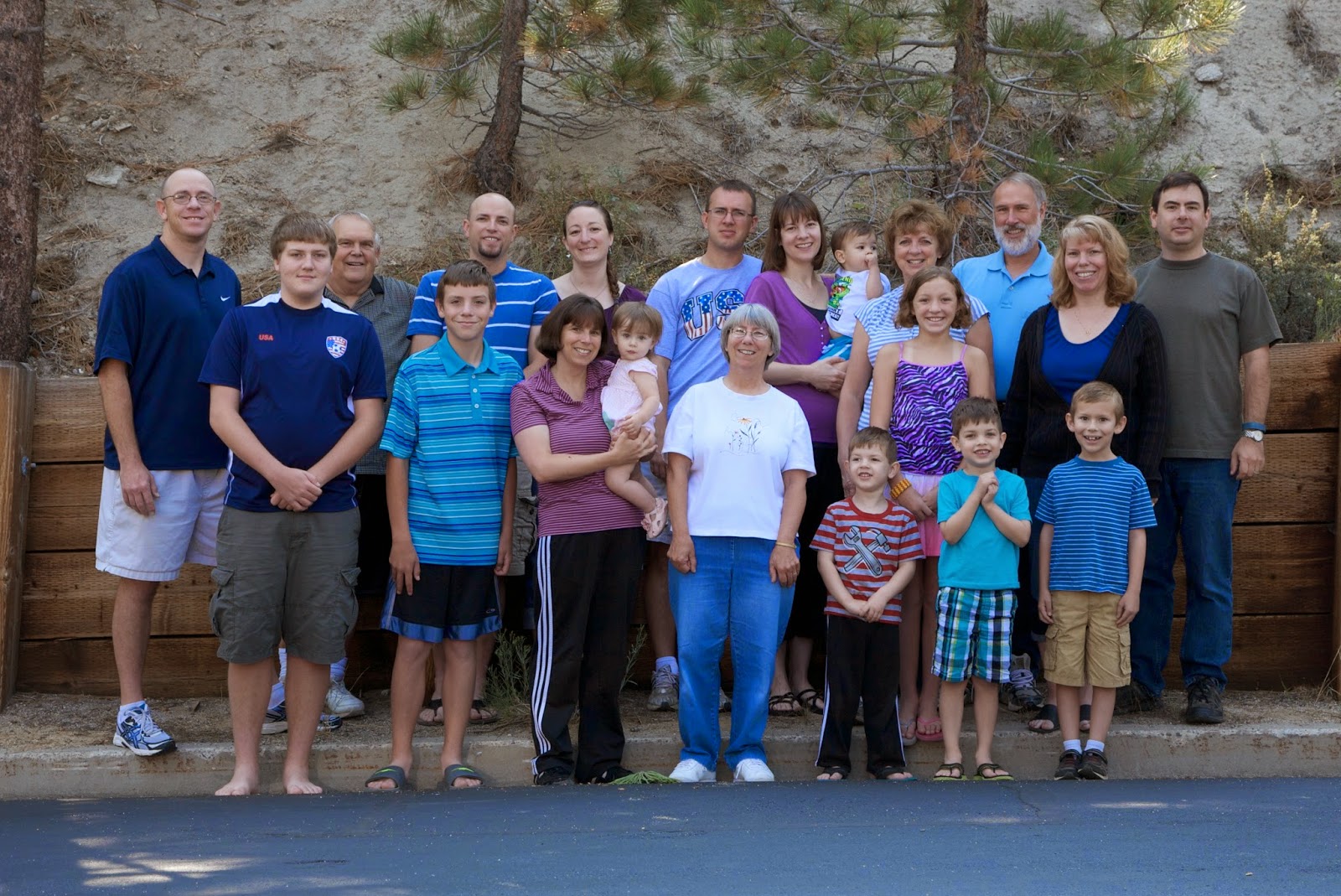 The 20 of us rented a huge house with a gorgeous view. 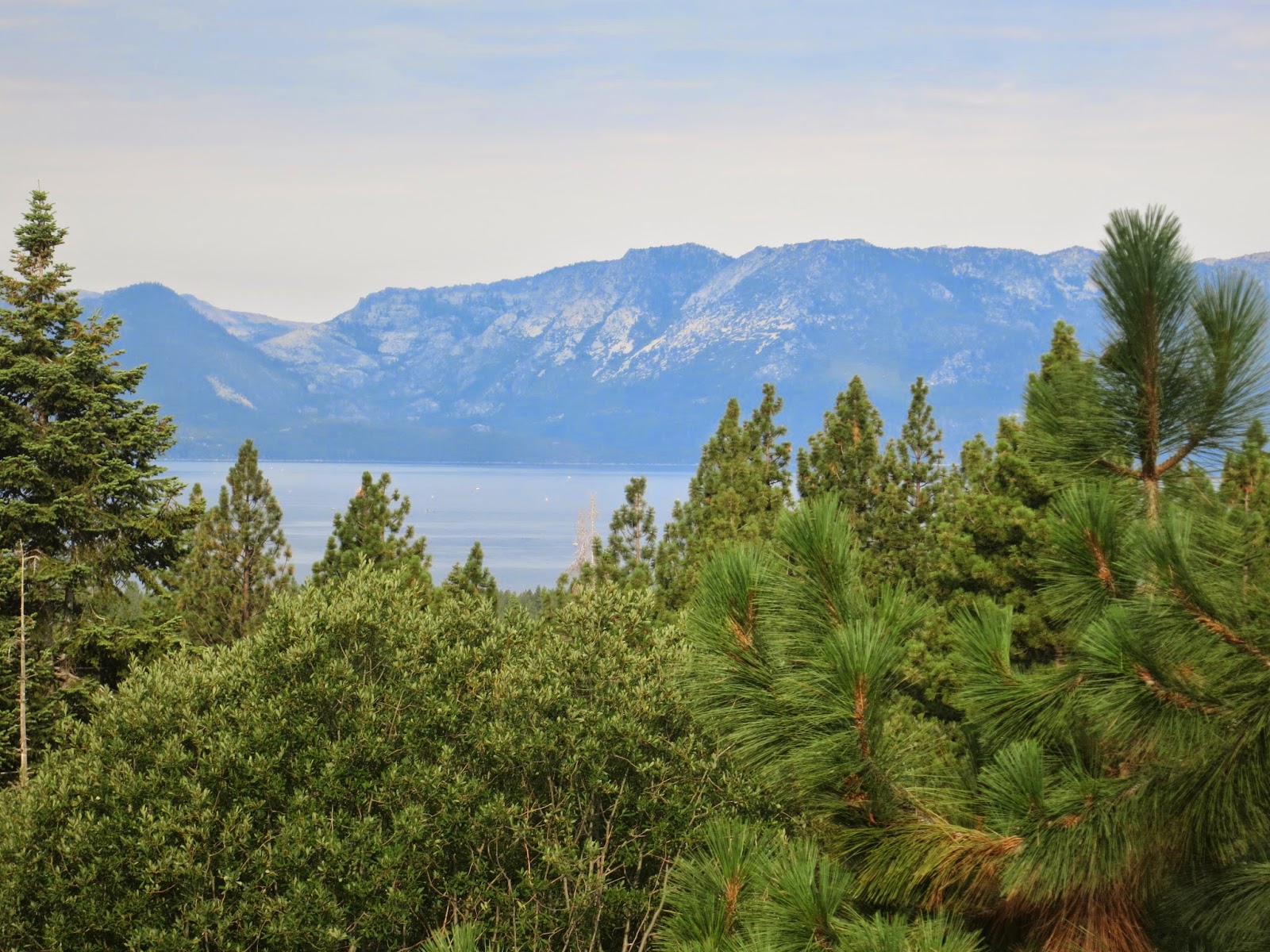 We had a wonderful time hanging out at the nearby beach... 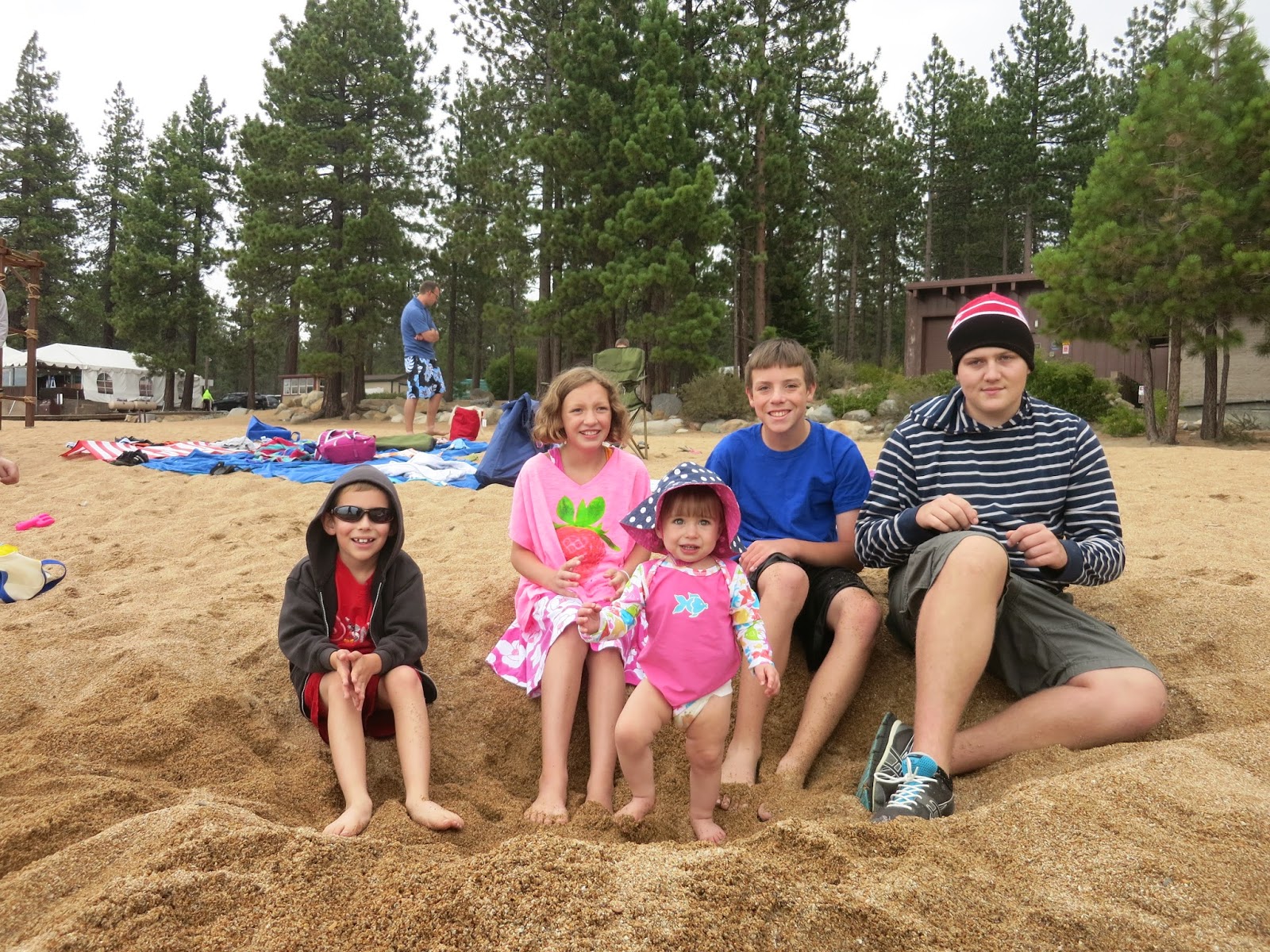 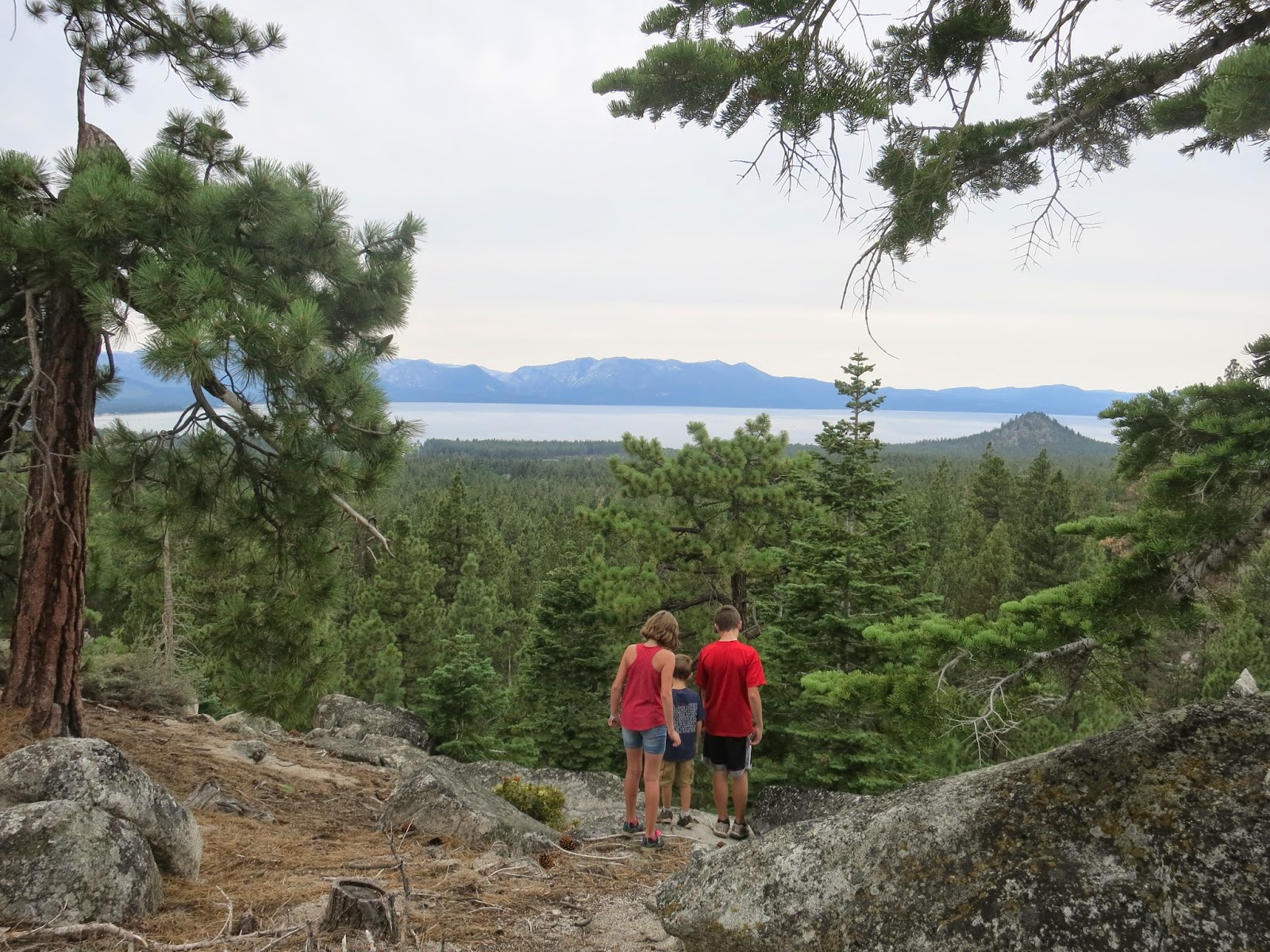 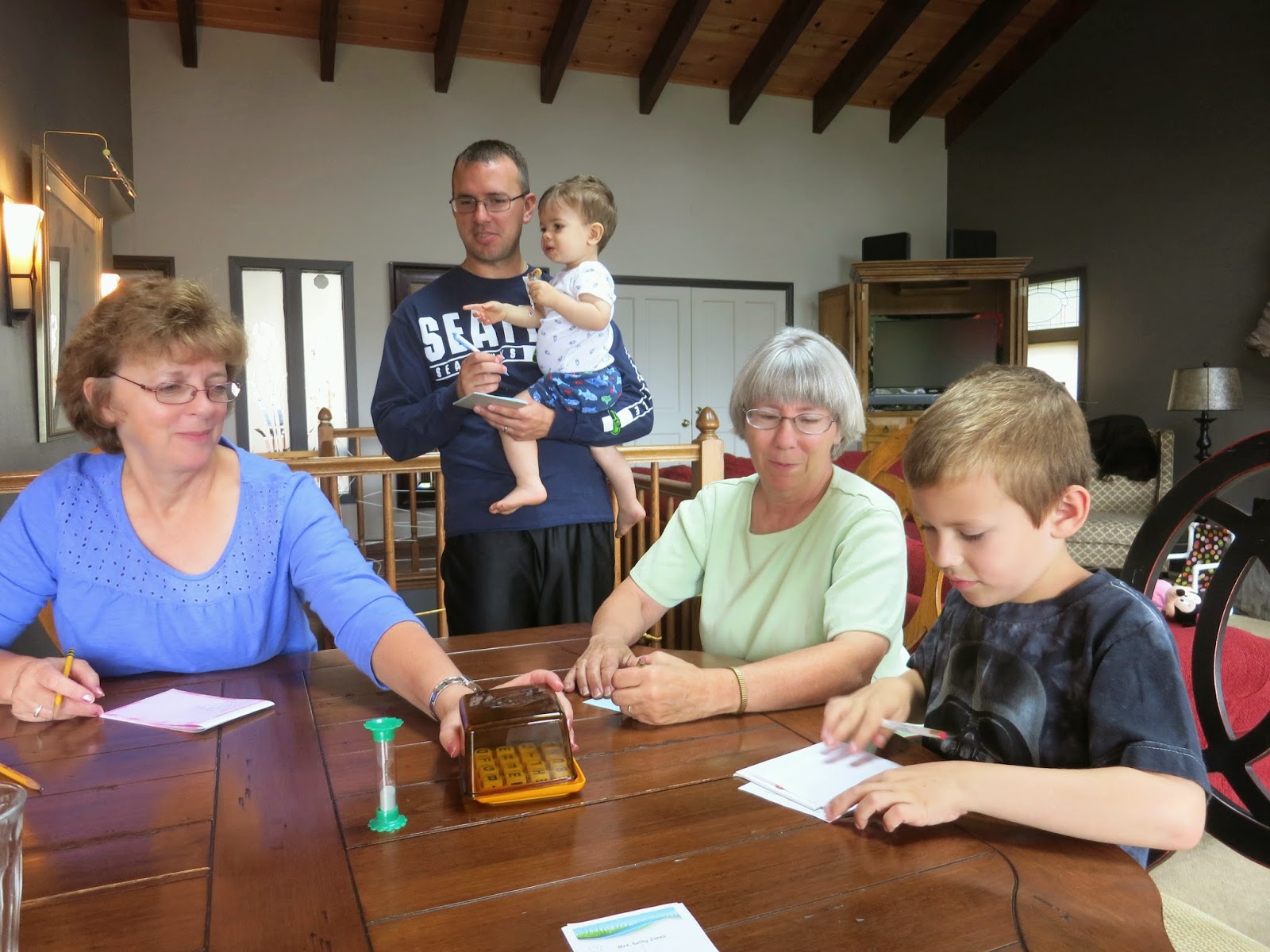 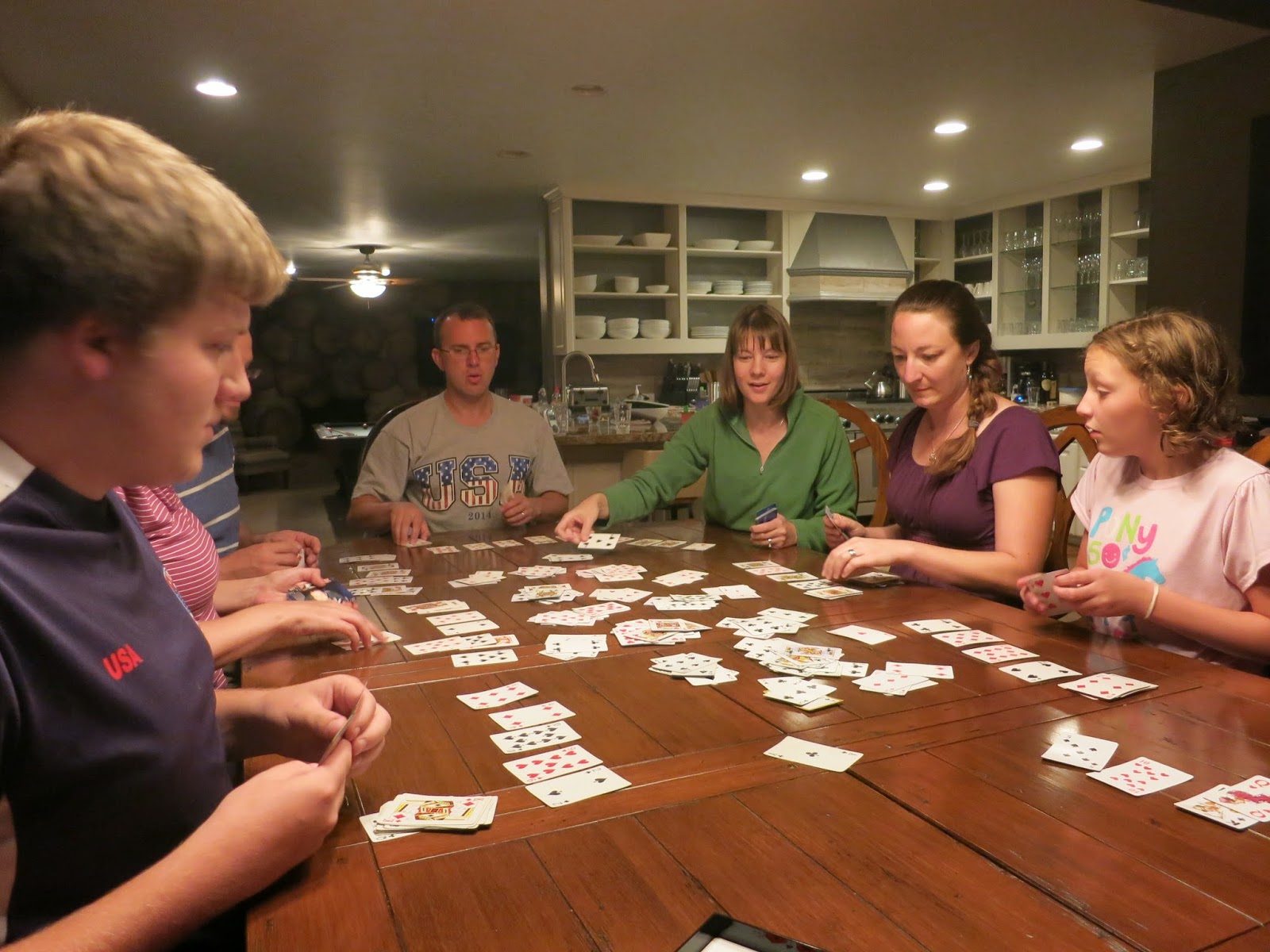 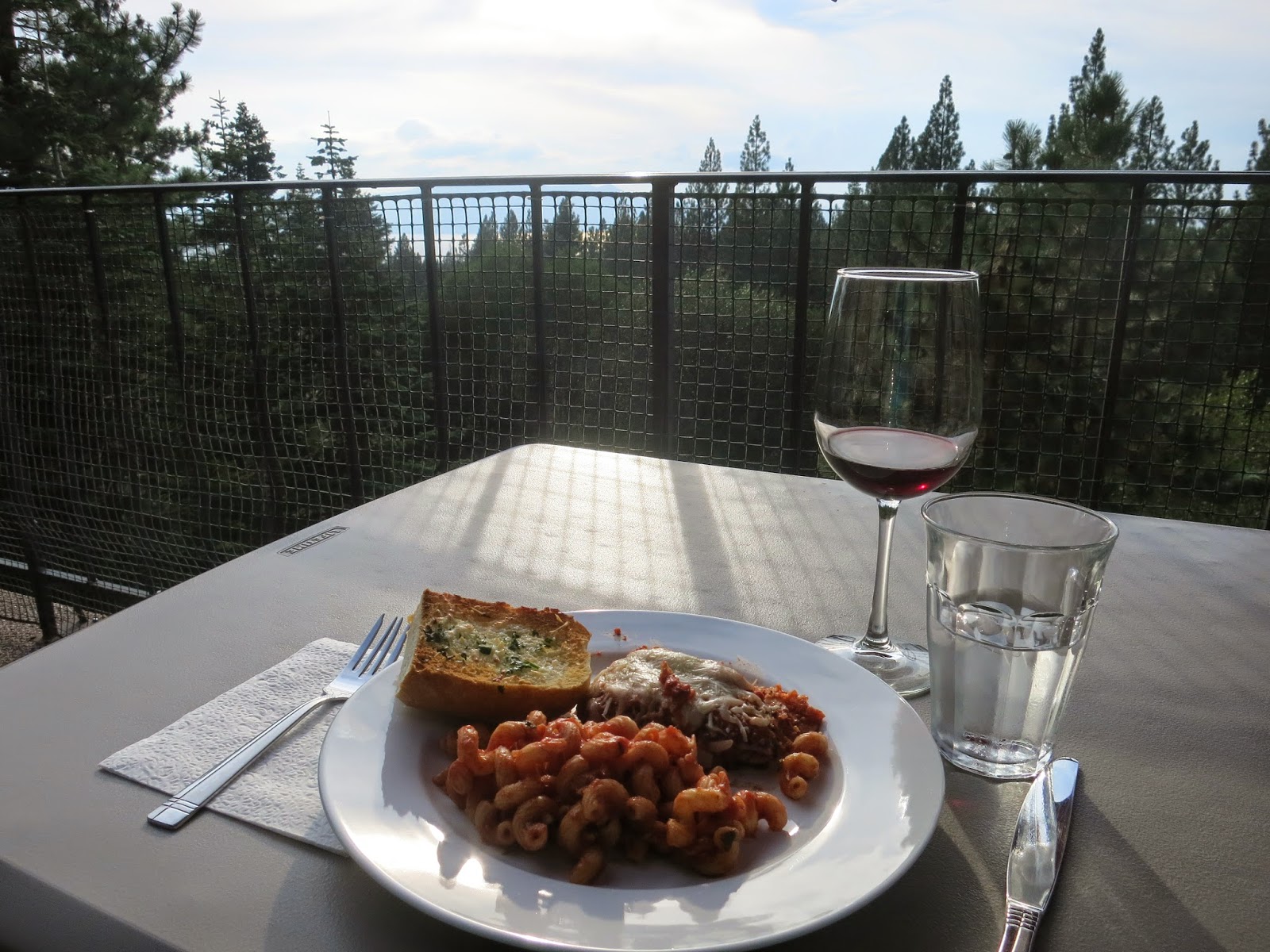 ... golfing at the most coolest mini golf place ever ... 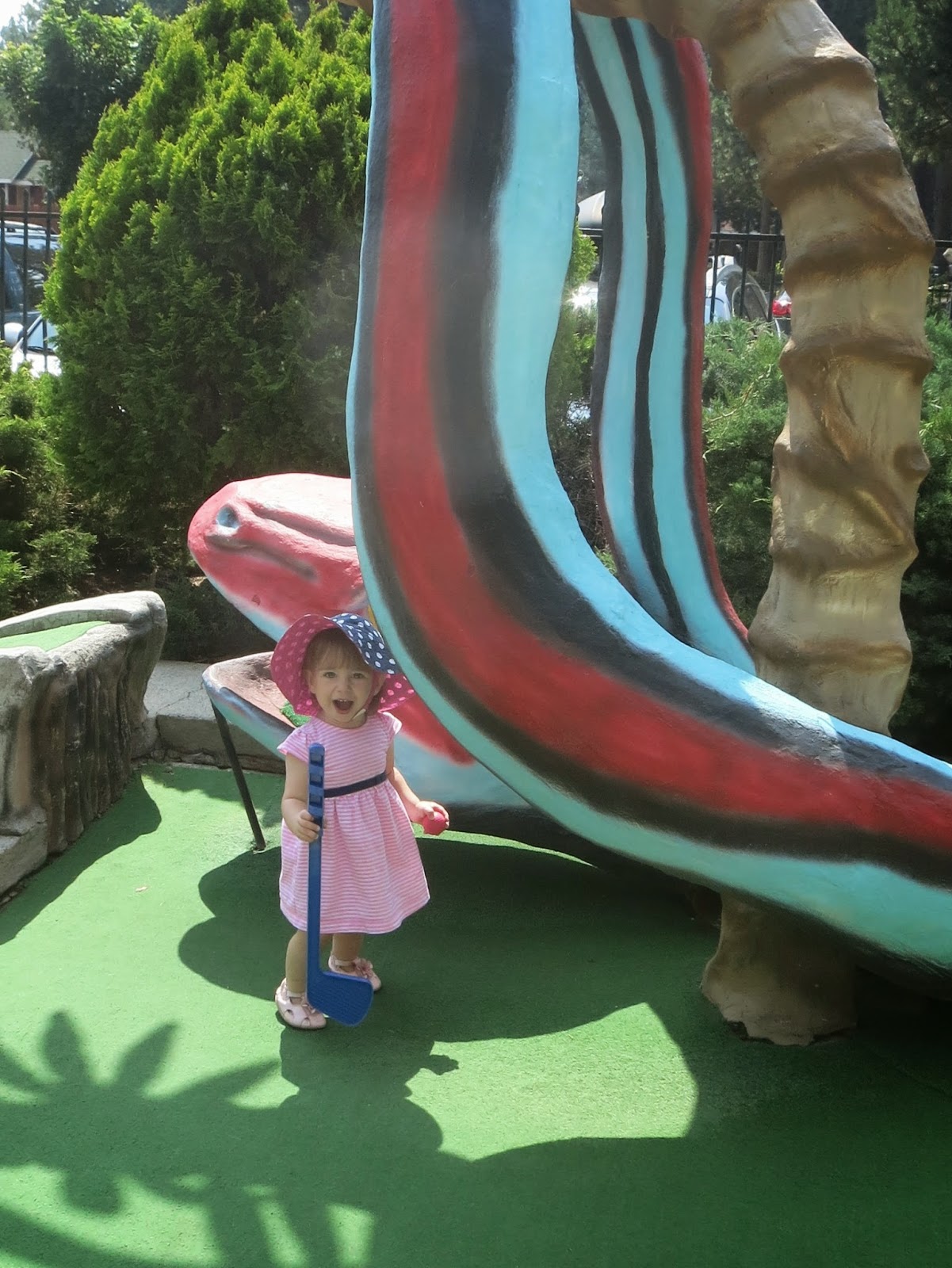 ... and just spending time with each other. 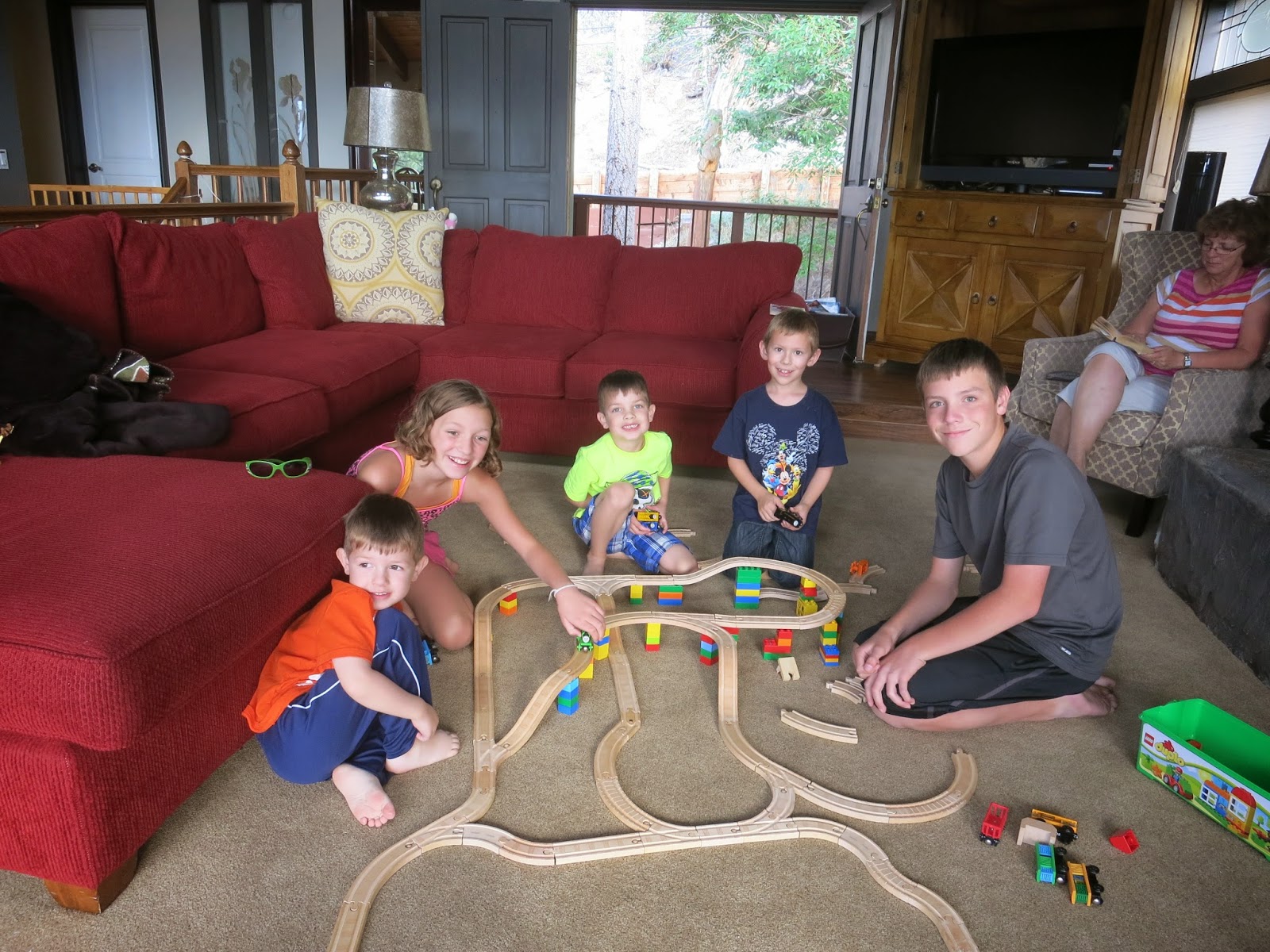 But the highlight for me was our 2014 Family Olympics. Last year, my sister Kari and brother-in-law Brian hosted our first Family Olympics. It was so much fun that we all knew it just had to be an annual event. My cousin Tim and his wife Ginger (winner of the first Olympics) offered to host the 2014 Games in Tahoe.

We began with the Opening Ceremonies and the Parade of Nations. A few of us were representing the same countries as before (Go, St. Vincent and the Grenadines!) while others changed to a different country. Steve represented Lebanon (where his maternal grandmother was from) and Trevor represented the Bahamas (which he enjoyed during the Caribbean cruise we took last year). Here we are, displaying our Perler Bead flags. 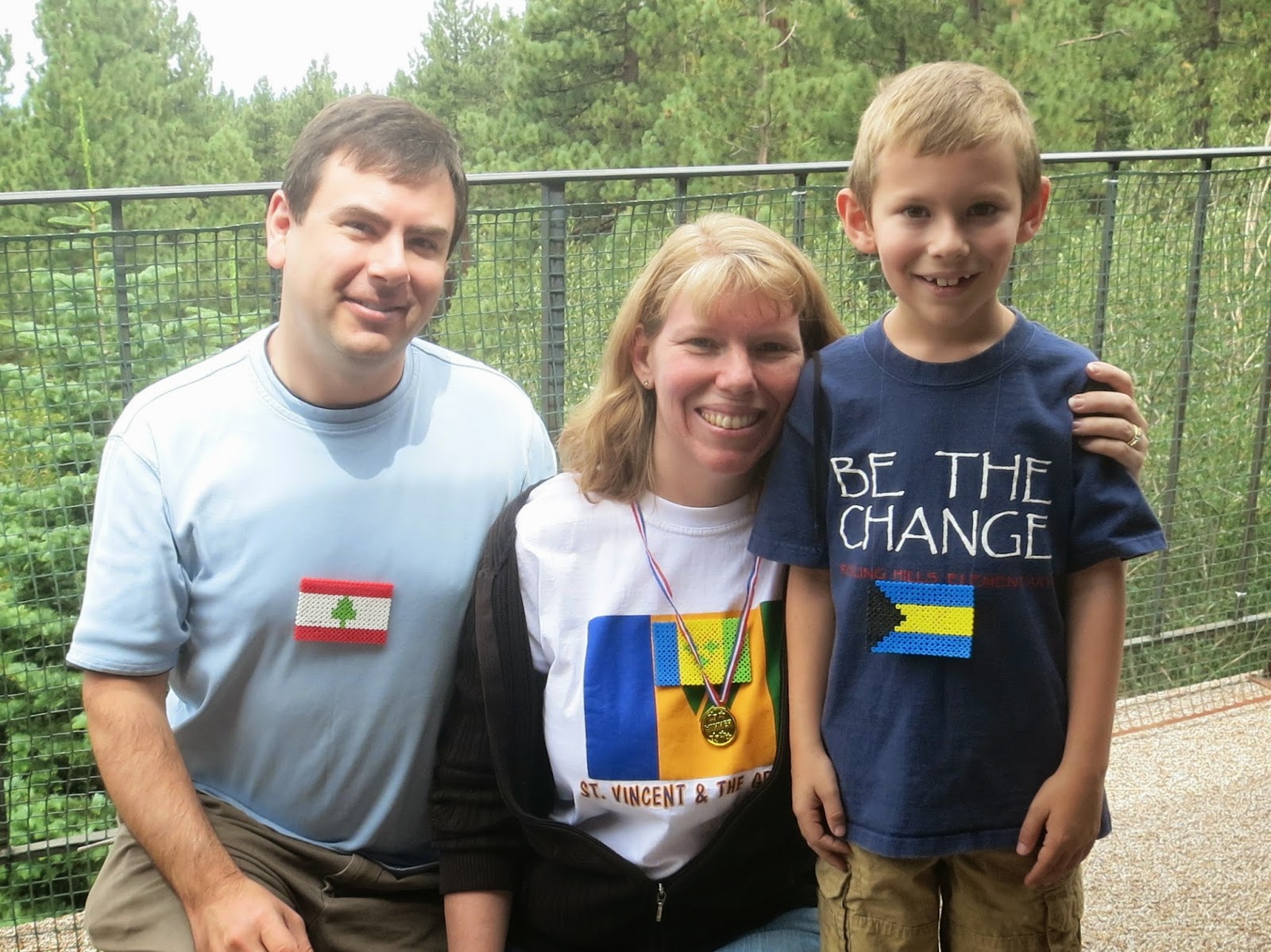 Event #1 was called "Toddler Croquet." Tim and Ginger explained that we'd each pick a toddler and swing him or her to hit a beach ball into a target. Here's my brother-in-law Brian and my godson Teagan. 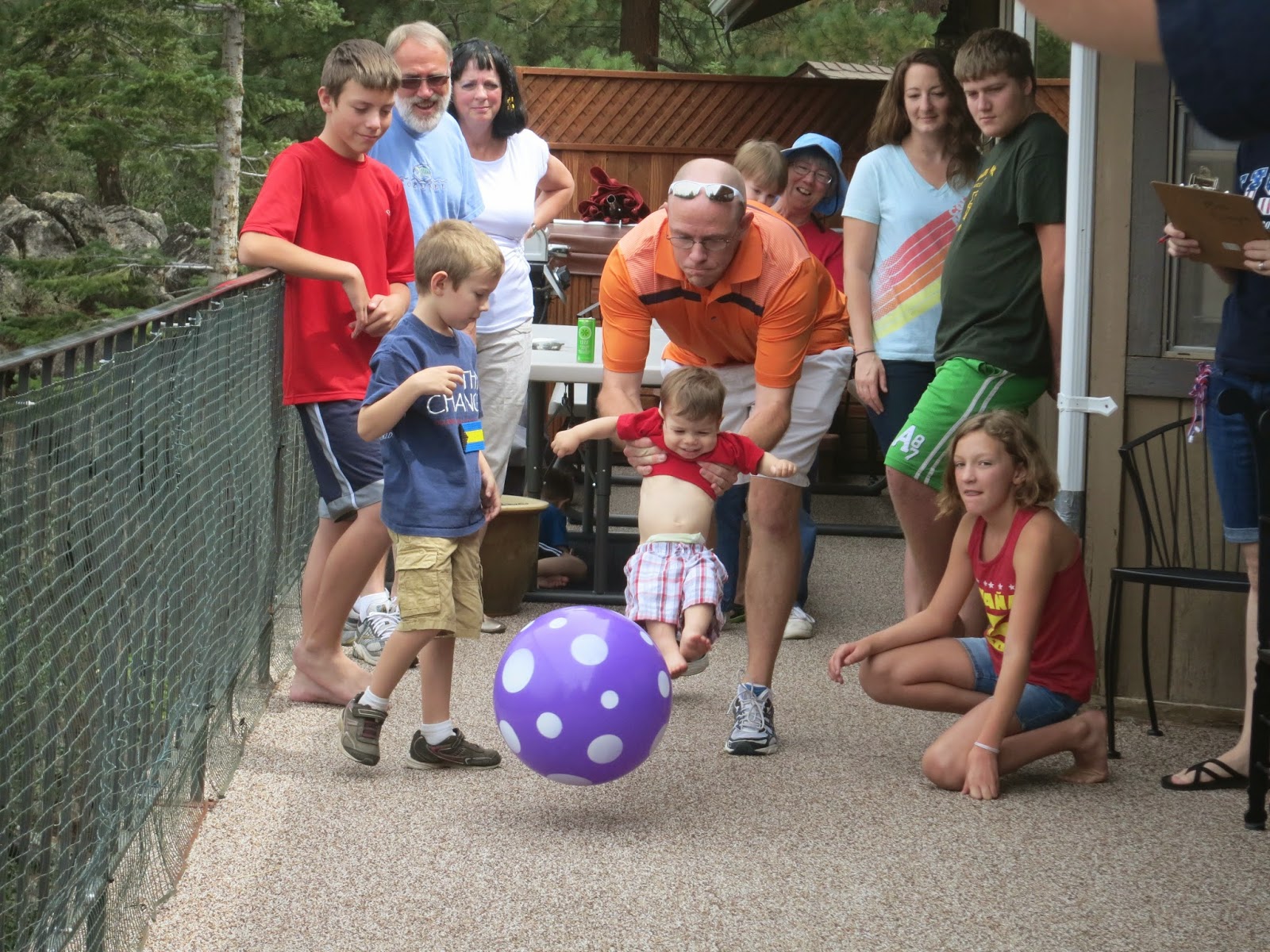 It was harder than it looked! The toddlers were surprisingly cooperative, but the sloped deck and windy weather provided a challenge. My cousin Matthew thought he had a winning strategy by swinging his toddler partner (Ethan) upside down! 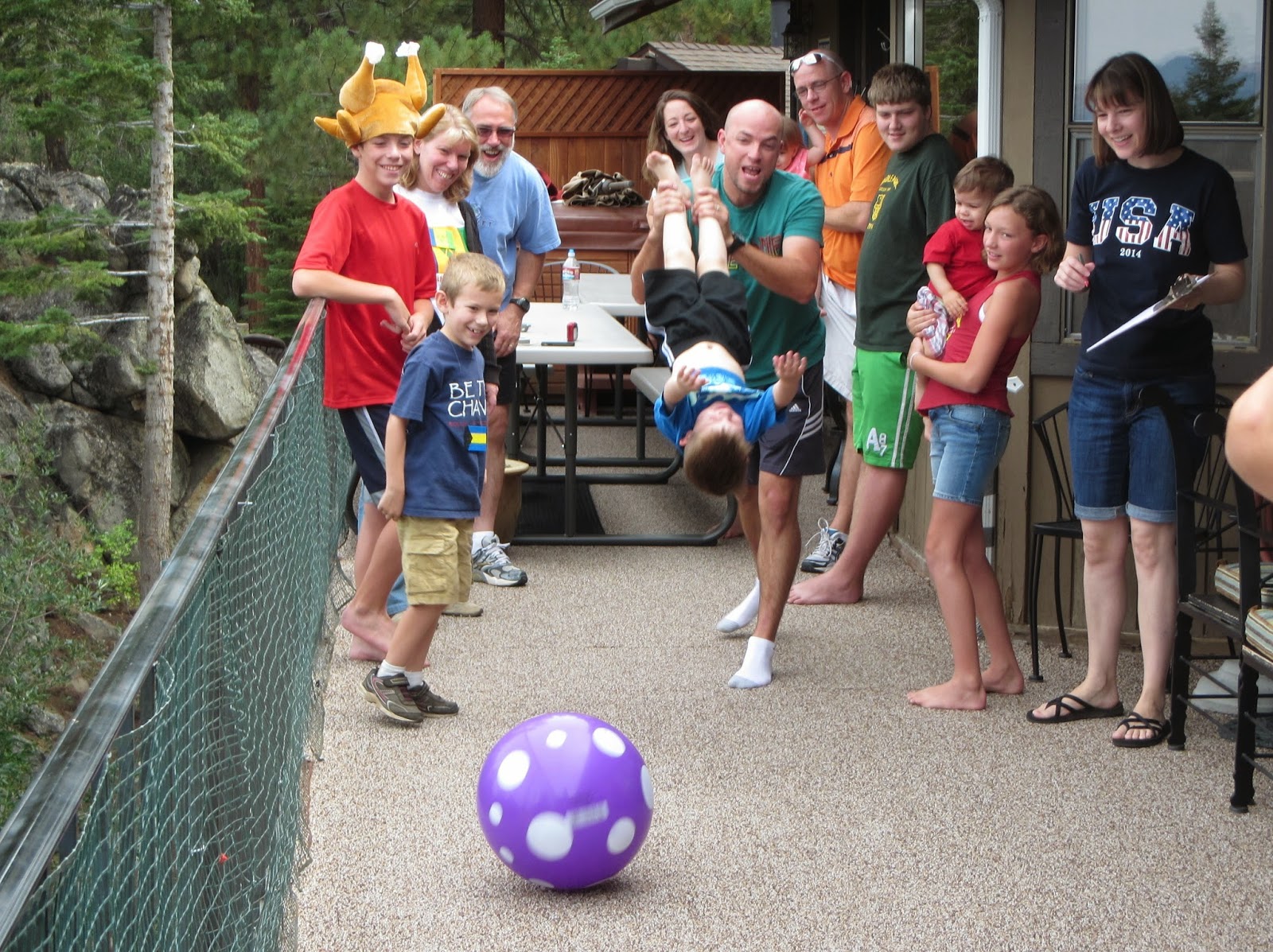 When we finished three rounds and the points were totaled, I was shocked to receive the first gold medal of the 2014 Family Olympics! Matthew placed second with his unusual technique.

Event #2 was called "Name that Food." It was a twist on the classic baby shower game. My sister Kari won gold; I tied for silver. 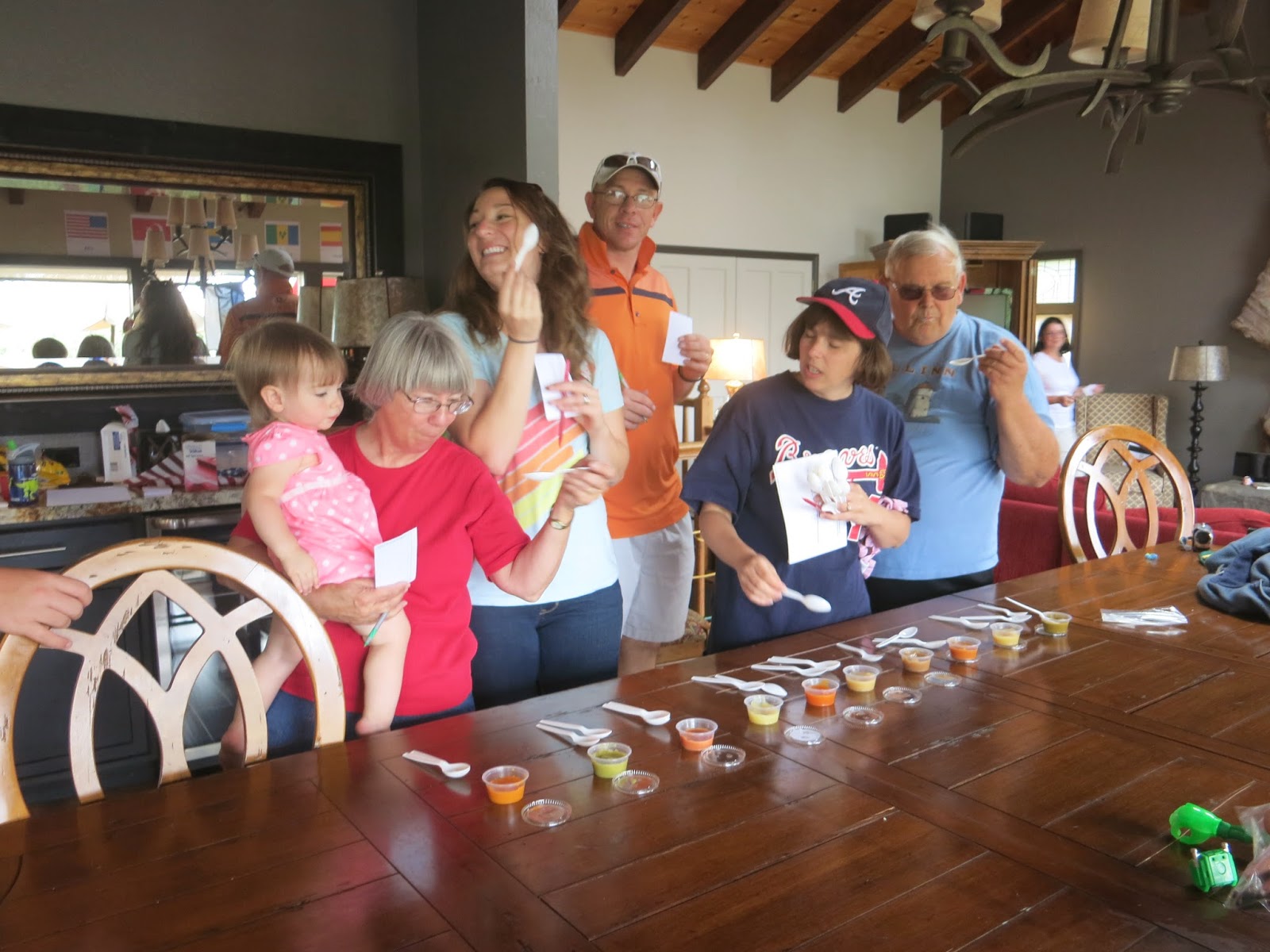 Event #3 was Frisbee Golf. Uh oh. I am ridiculously bad with Frisbees. Really, really bad. This is my Aunt Vickie (representing Egypt, complete with awesome black wig). Neither she nor I scored any points... and neither did eight other family members! A 10-way tie for last. My mom won the event, which was probably the biggest upset in the entire history of sports. 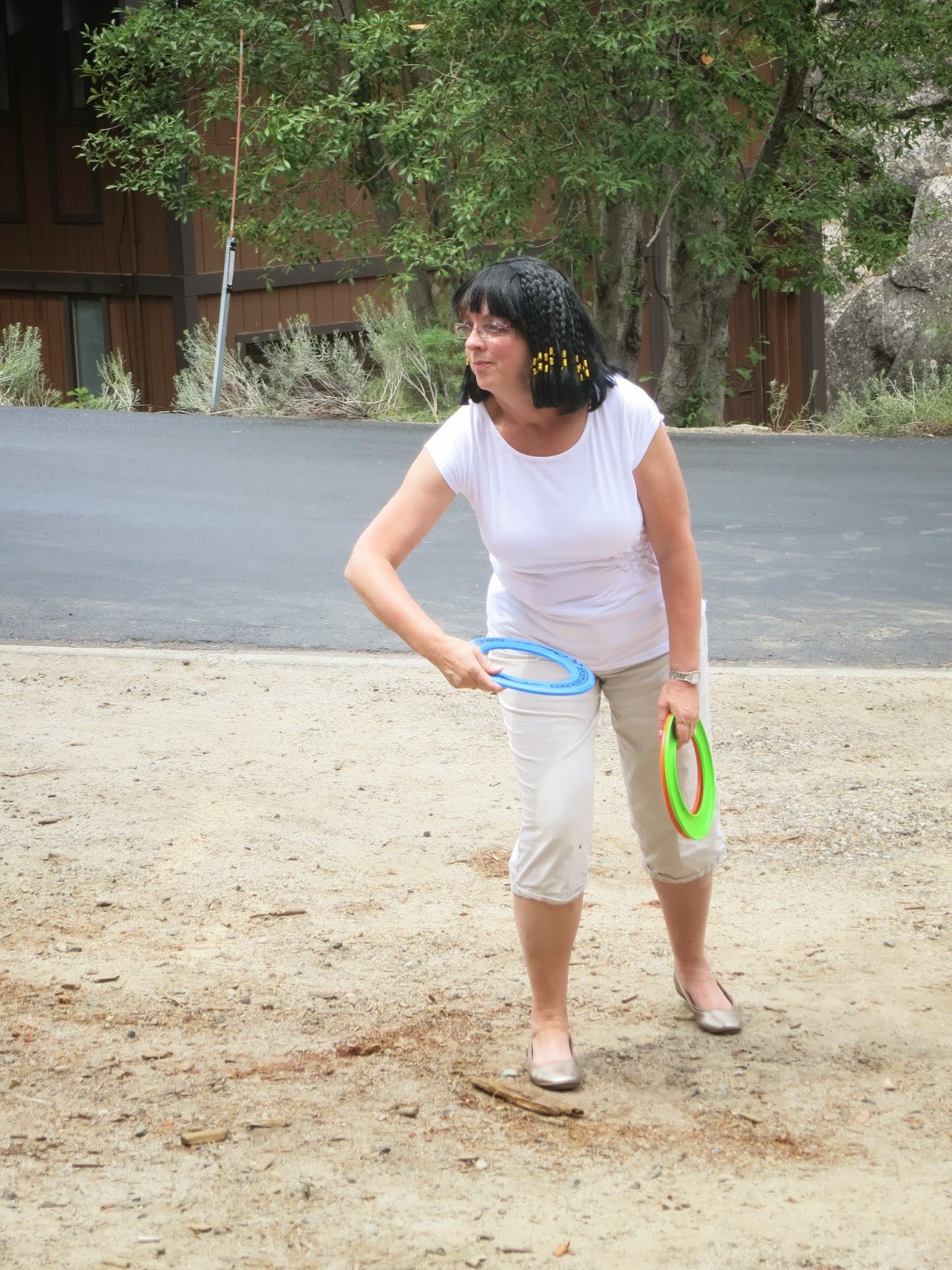 Event #4 was called "Water Pong." The goal was to use a water gun to shoot ping pong balls off of golf tees. Uh oh... again. Definitely not my strength. I finished second-to-last. It was fun though! 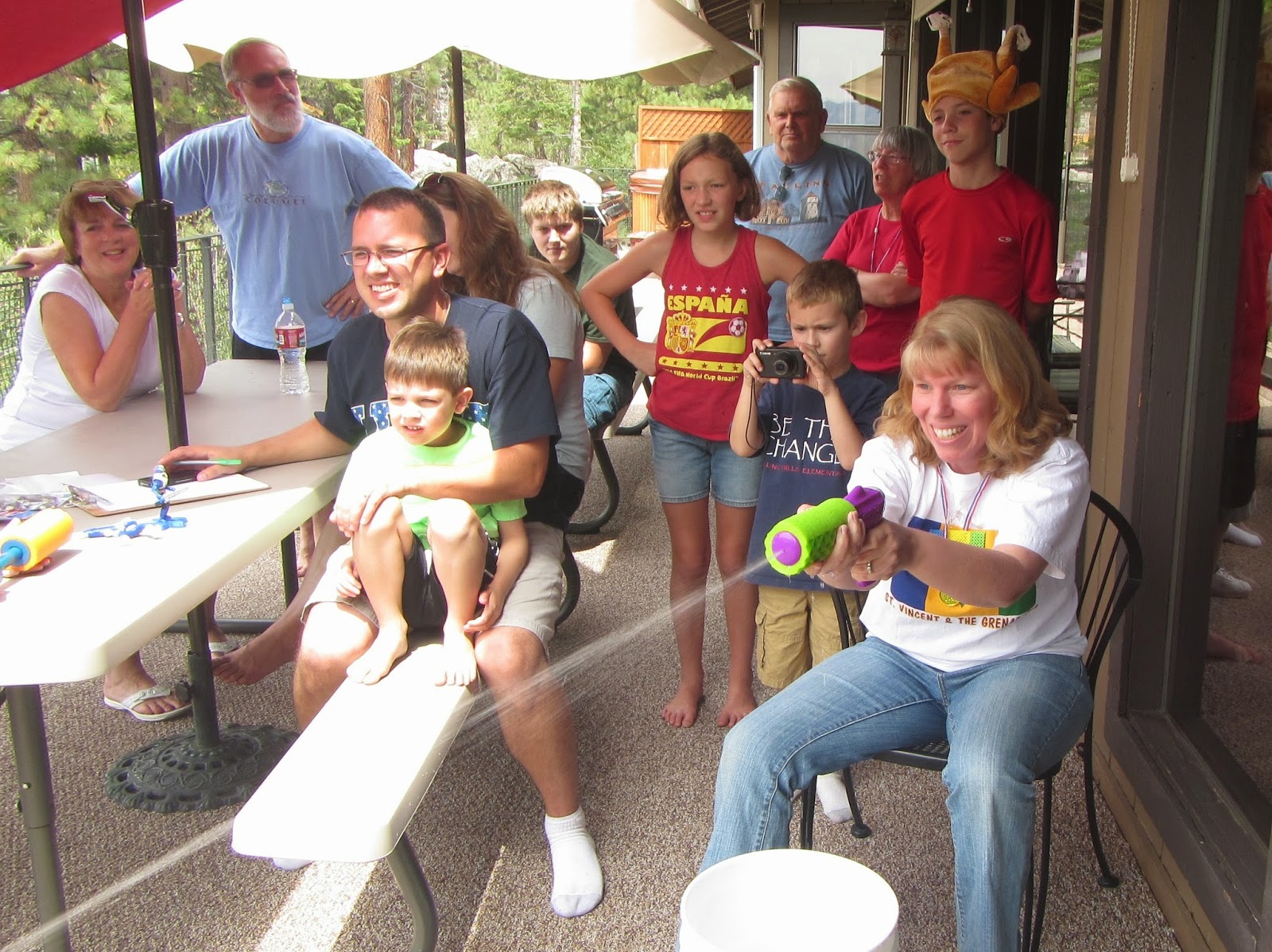 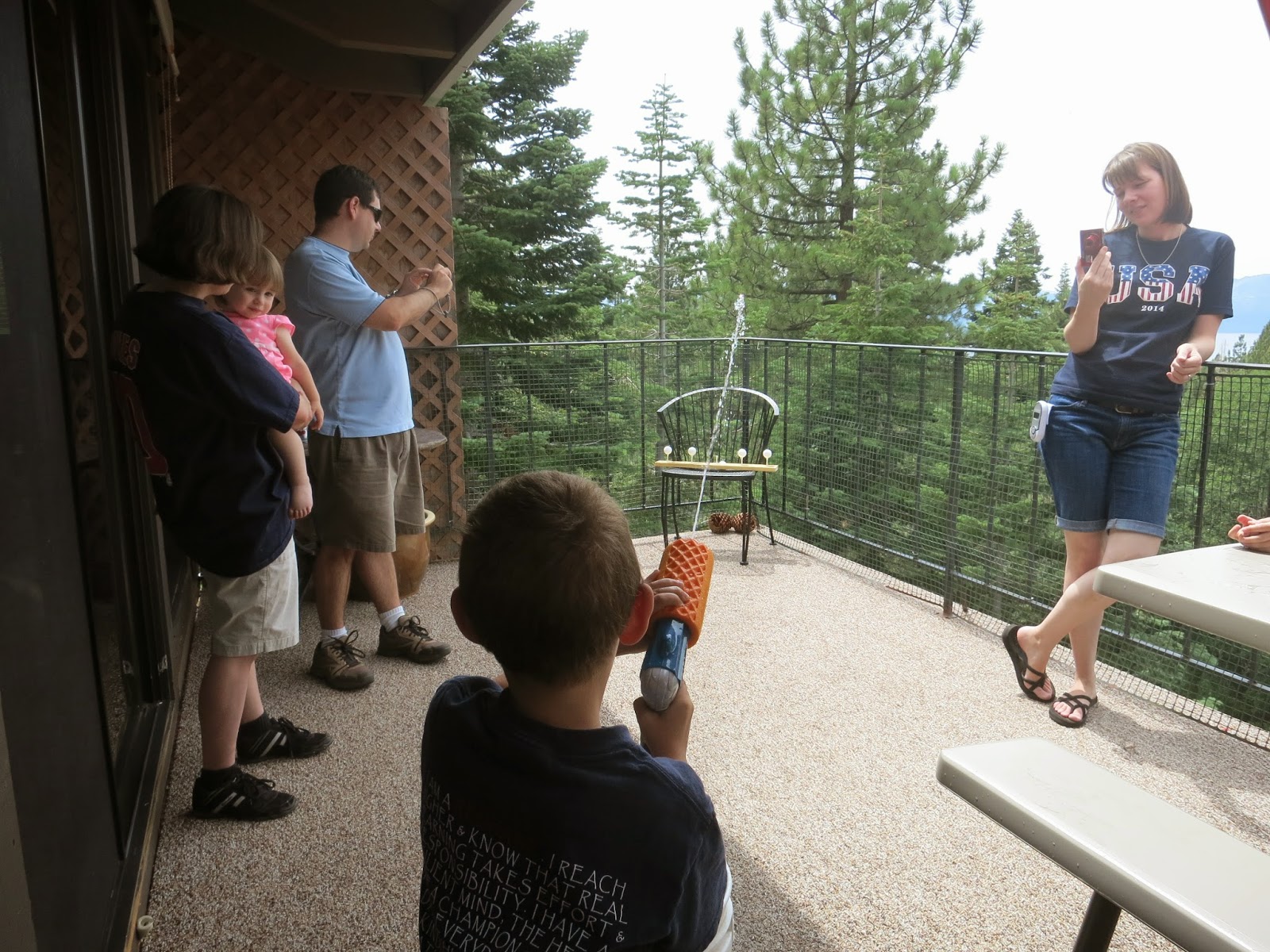 Steve was the gold medalist!

Event #5 was "Useless Trivia." I tied for third; my mom won her second gold medal. 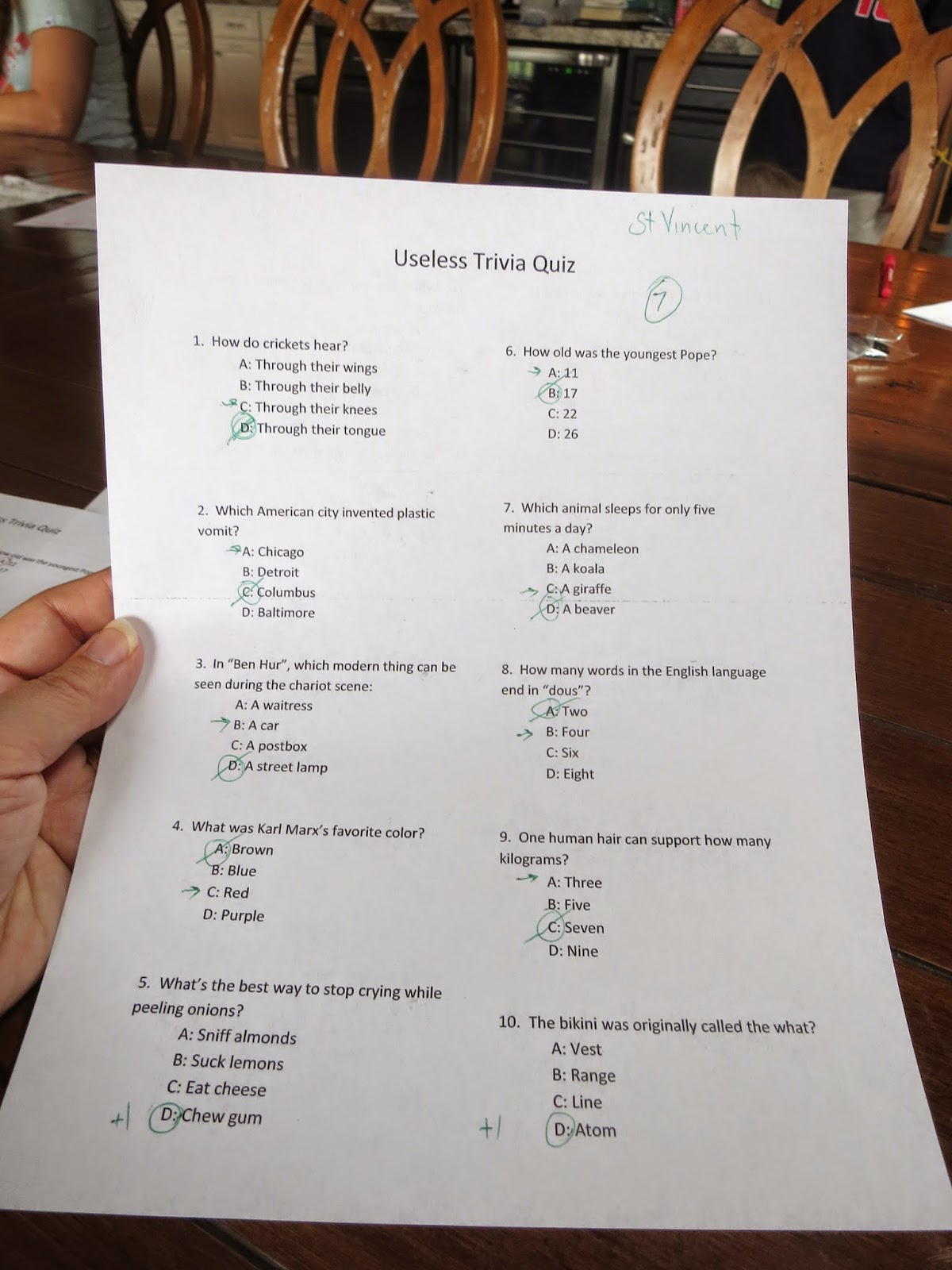 Event #6 was "Mad Minutes." My cousin Tim is a high school math teacher, so it was no surprise that he'd work a math event into our Olympics. We started with addition. We had one minute to get as many of the problems correct as we could. We then moved on to subtraction, multiplication, division, and a mixed fact sheet. Our score was the total correct on all five pages. Trevor was at a major disadvantage, having just completed second grade (multiplication and division are introduced in third grade). I, on the other hand, spent 11 years correcting 32 multiplication and division timed fact tests every single week. I am fast. I finished every problem correctly on all five pages. My sister did too. I finished the final sheet faster, but we both earned a gold medal. 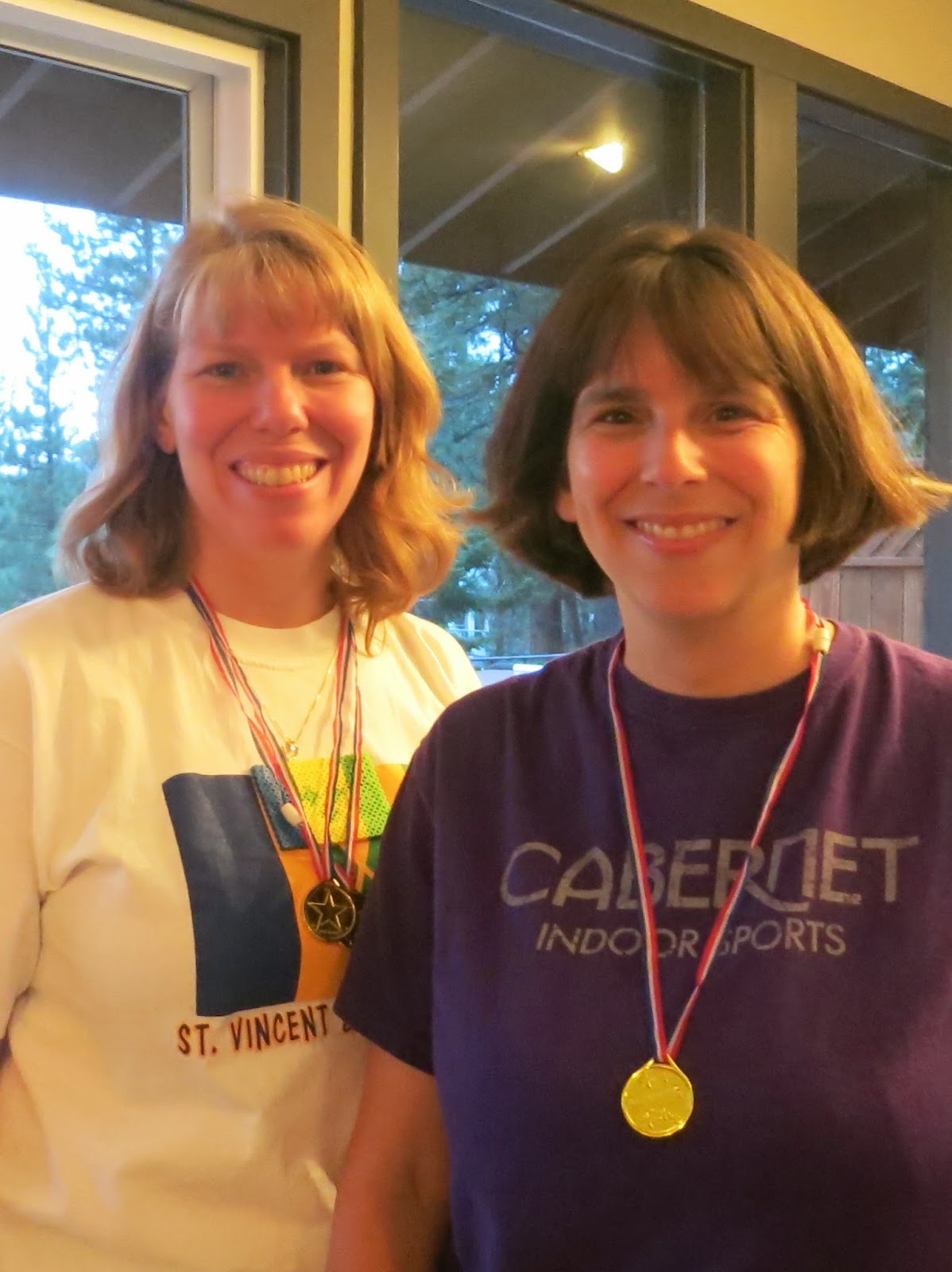 Event #7 was called "Five Nuts on a Stick." The goal was to stack five nuts using only a skewer. Tricky! Here you can see Matthew's wife Danelle, who finished first in her heat, supporting Trevor while he and my mom race to finish second. 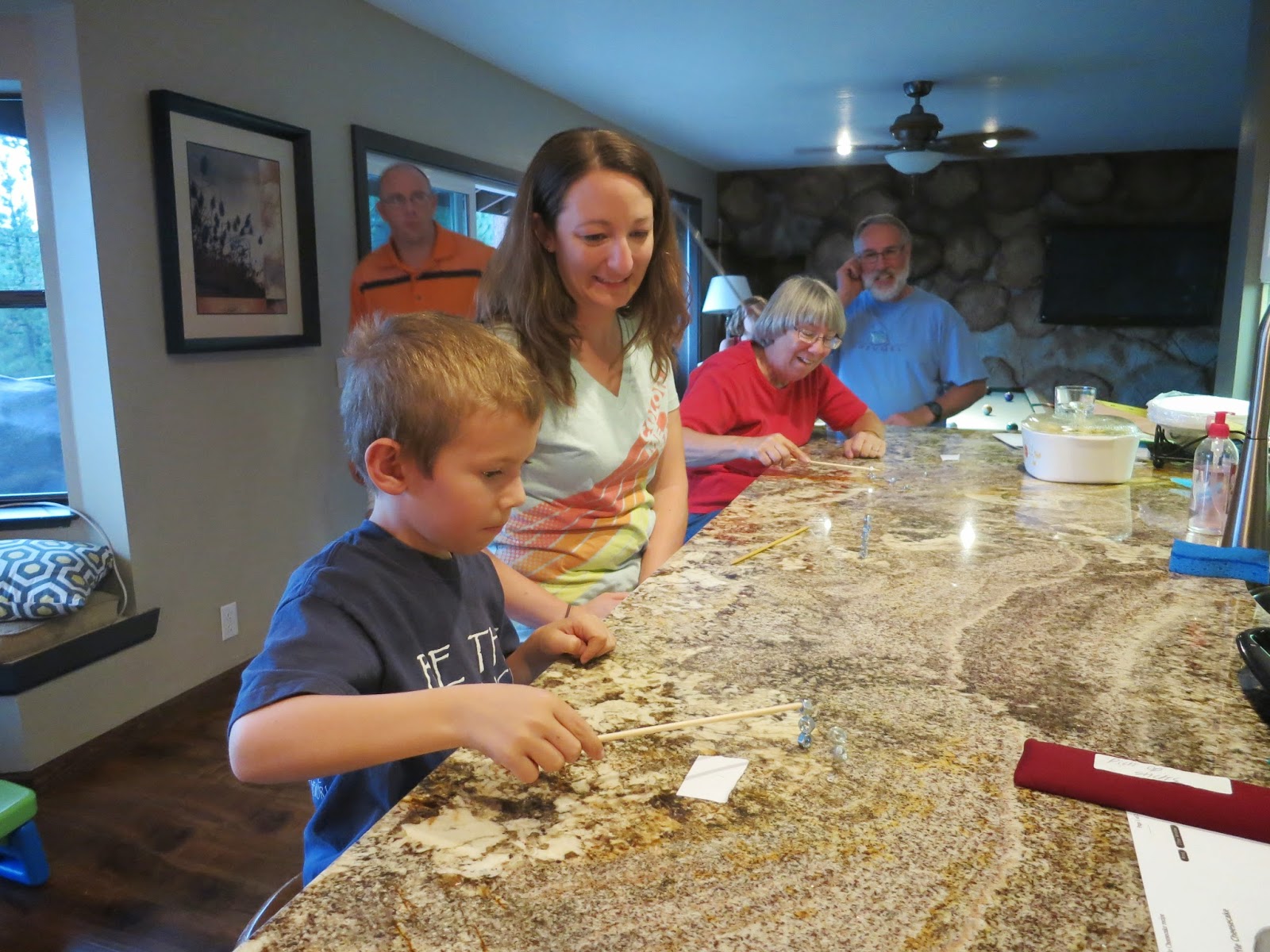 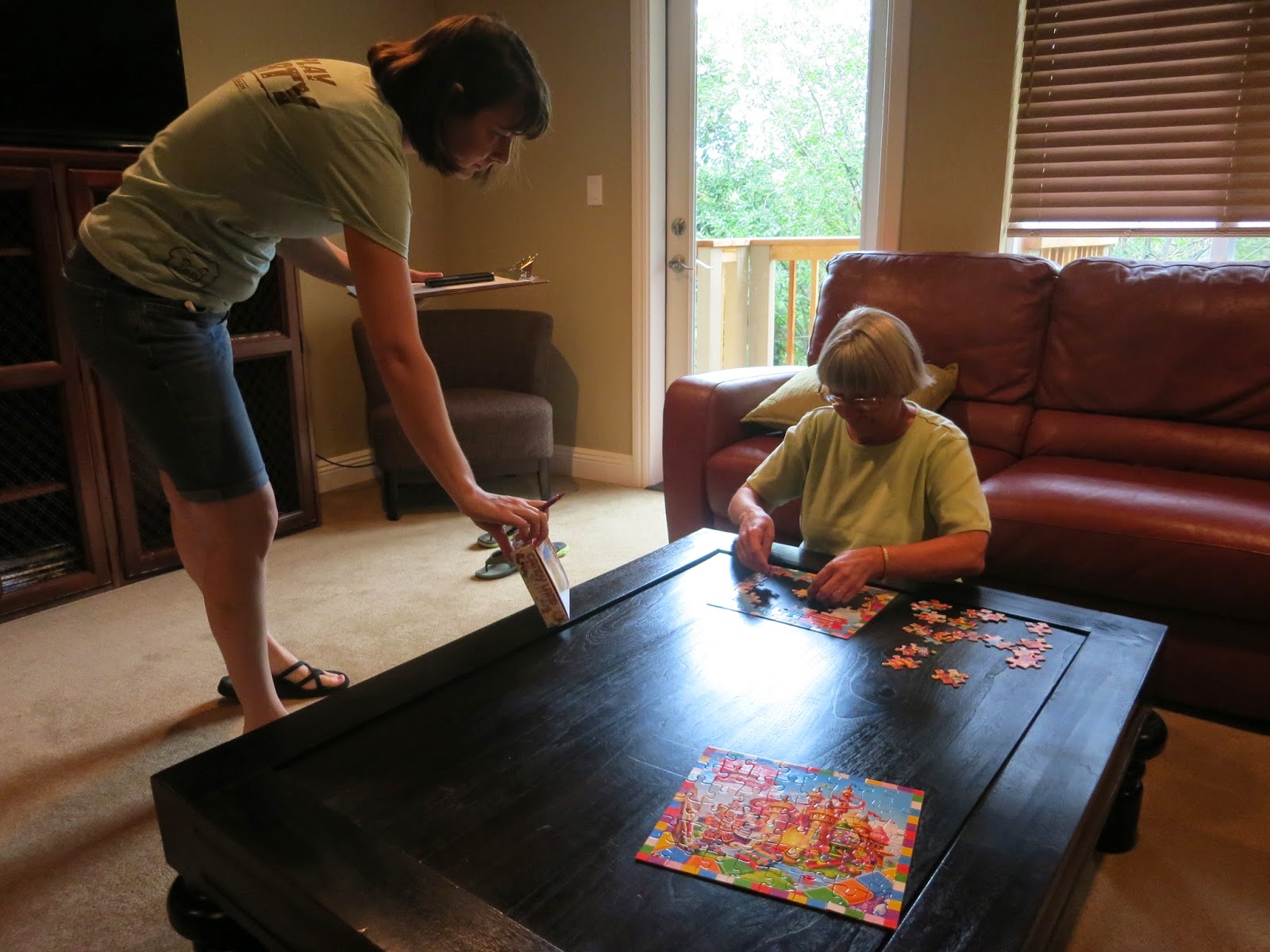 I knew I did well, as I'm a puzzle fanatic. Turns out I did well enough for silver. Kari edged me out, bringing her gold medal count to 3 and guaranteeing that she'd be somewhere on the medal stand during Closing Ceremonies.

Event #9 was "Water Balloon Toss." We randomly drew numbers to determine partners; I was paired up with Steve. Unfortunately, we were out early. Our balloon was faulty, I swear! I caught it gently from a short distance but it exploded on contact. Other people's balloons fell on the pavement without breaking. Oh well! 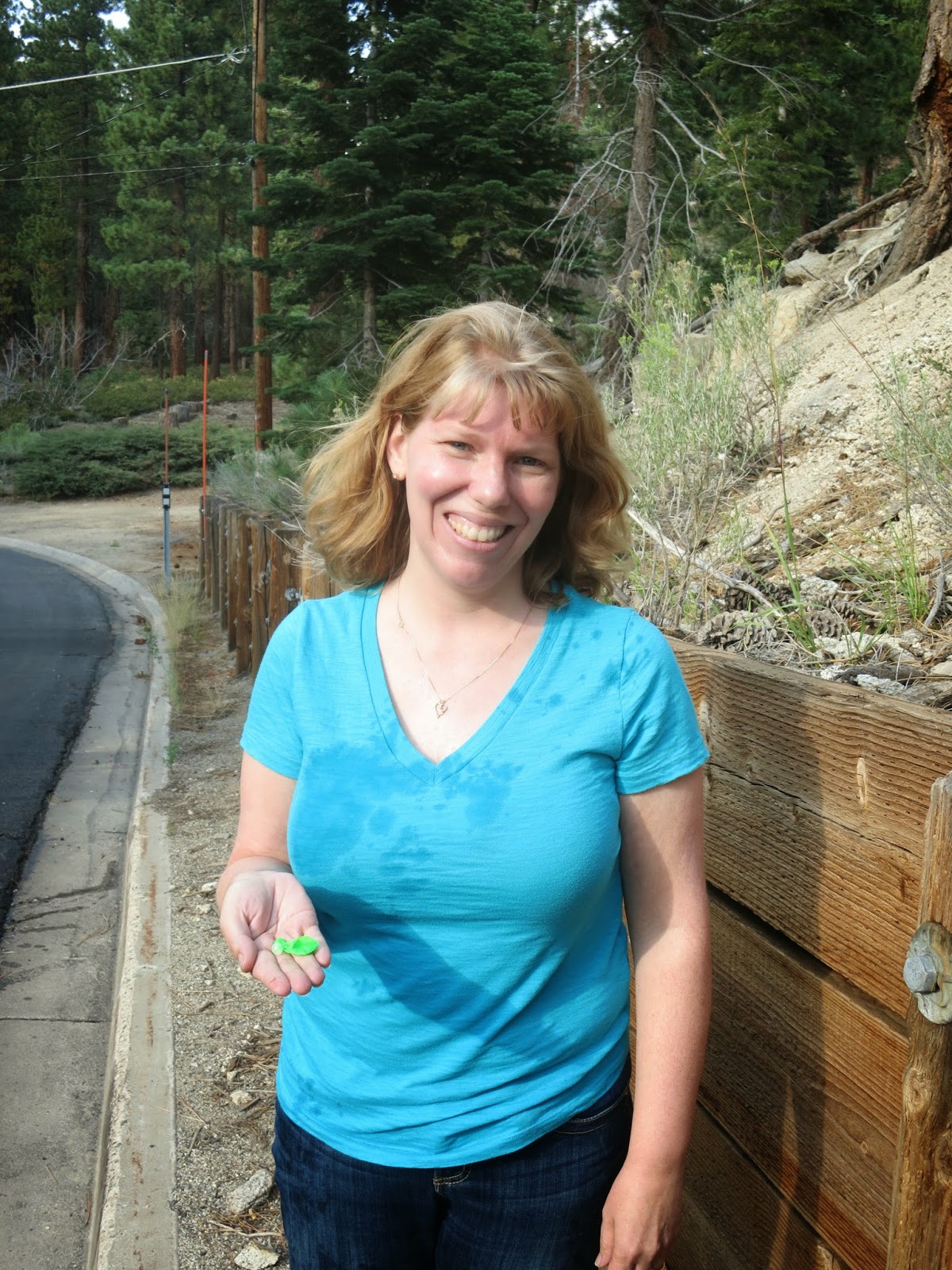 Eventually, we were down to the teams of Brian (my brother-in-law) and Matthew (my cousin) vs. my dad and my Uncle Don. Brian and Matthew beat them (barely) to earn the gold medals. 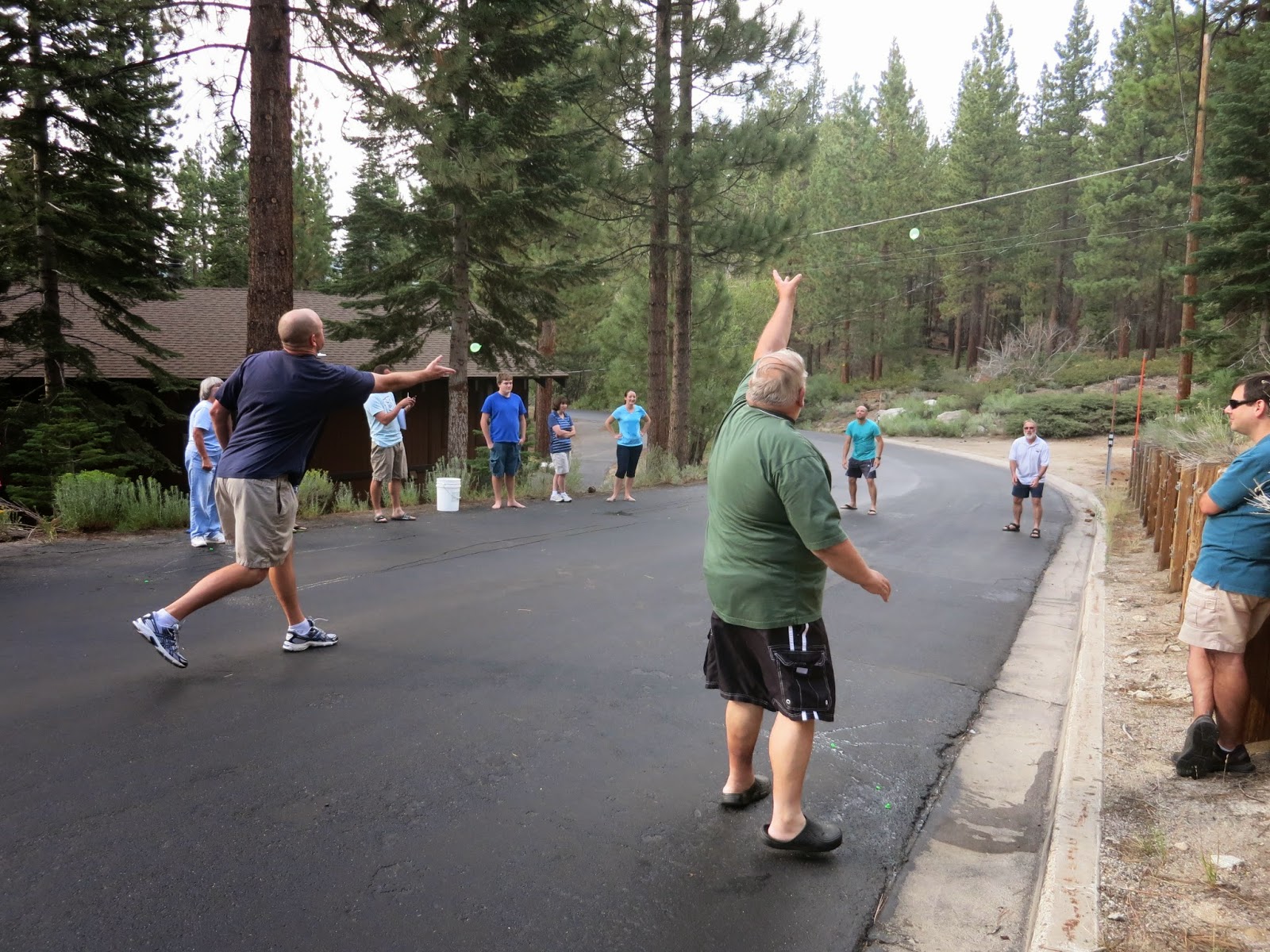 Event #10 was "Spoons." We were randomly assigned to one of two tables, where we weeded the competition down from 7 contestants to just three. Those final six joined together at the table for the championship round. 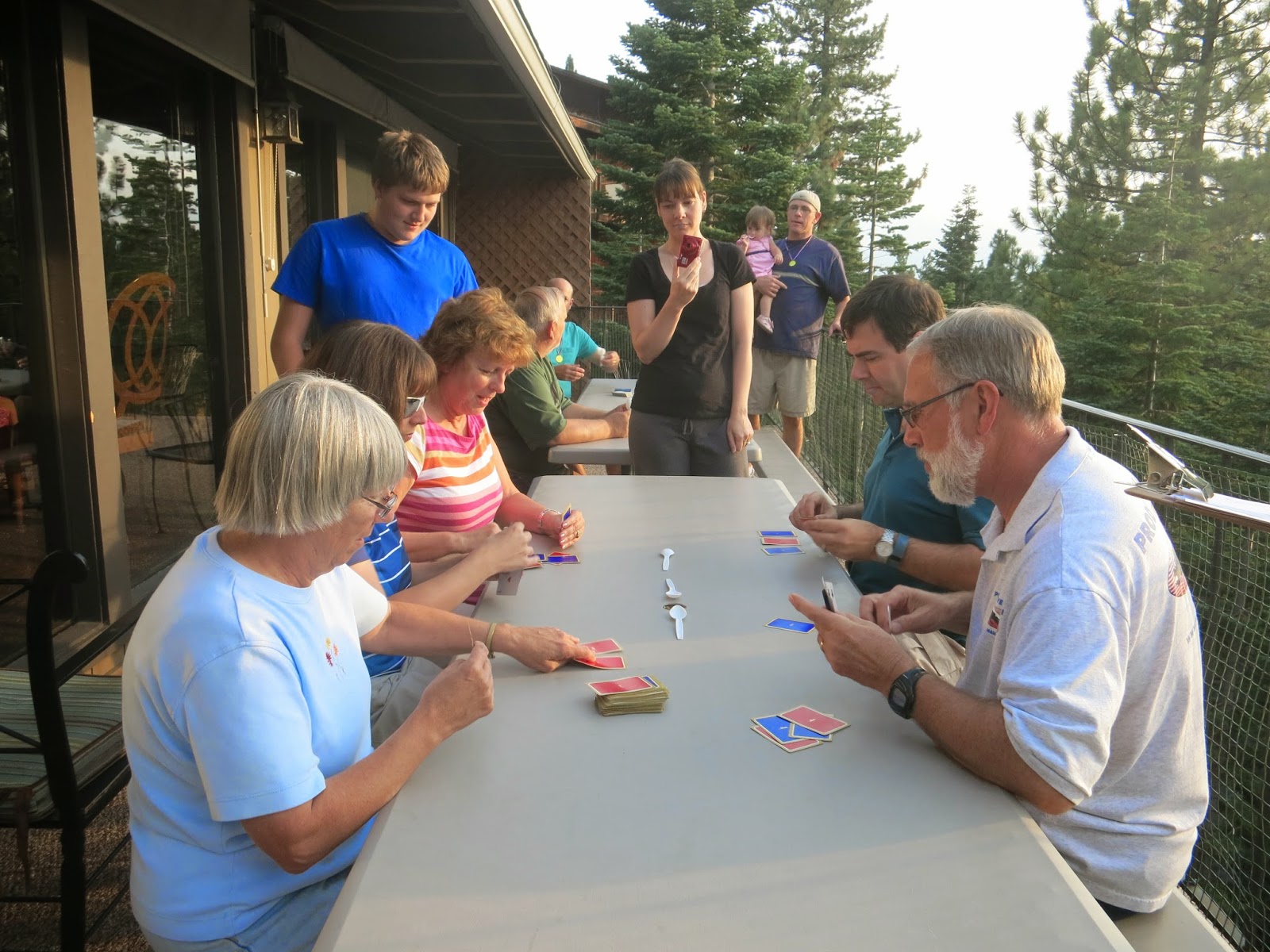 Uncle Don beat out Kari for the gold! 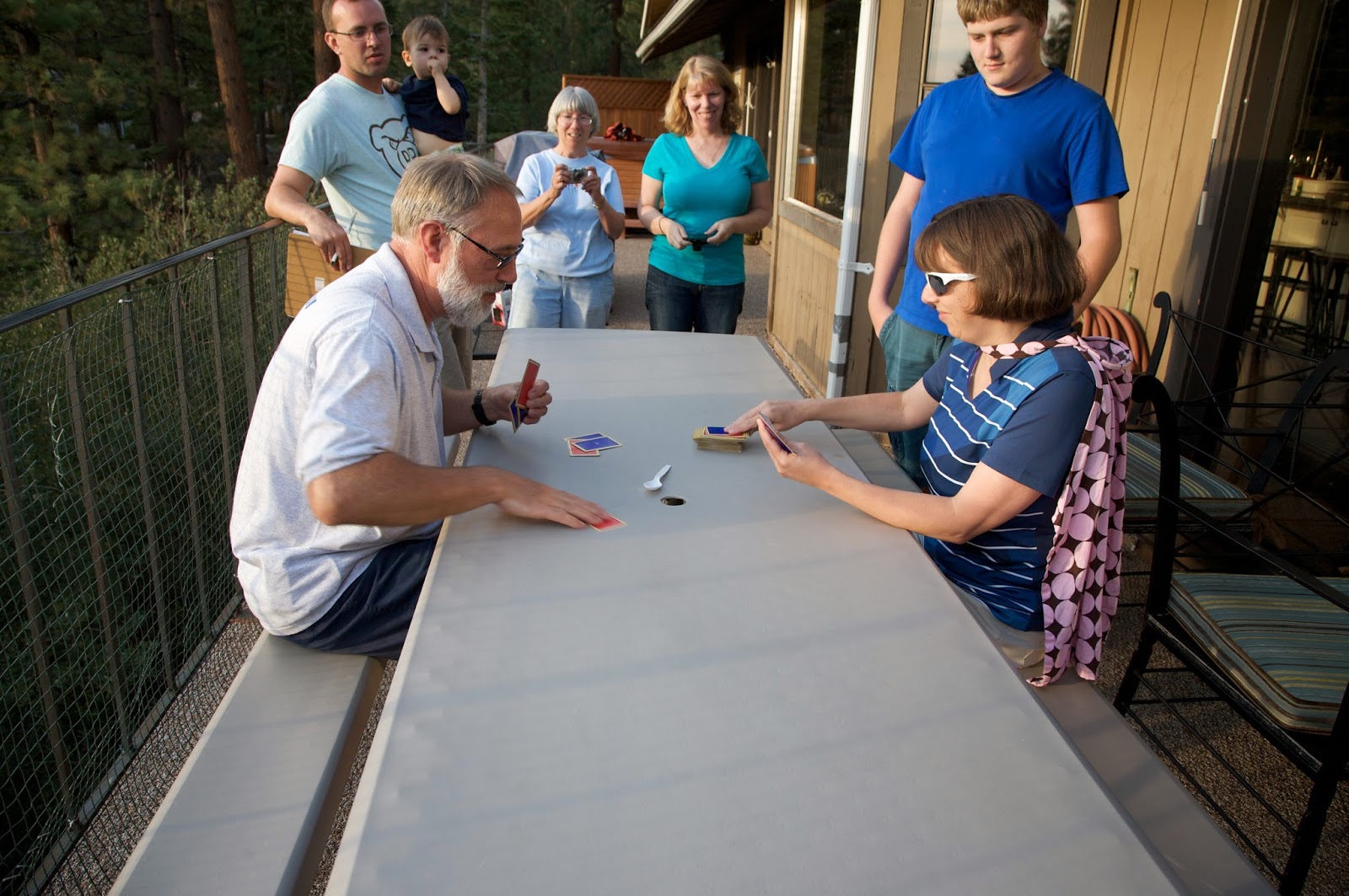 The final event was "Flag Quiz." All week long, the flags of our nations had been displayed in the kitchen. None of us had any idea that those very flags (which came down that morning) would be the basis of our final event! Tricky! Here we are, correcting our answers and inspecting the flags: 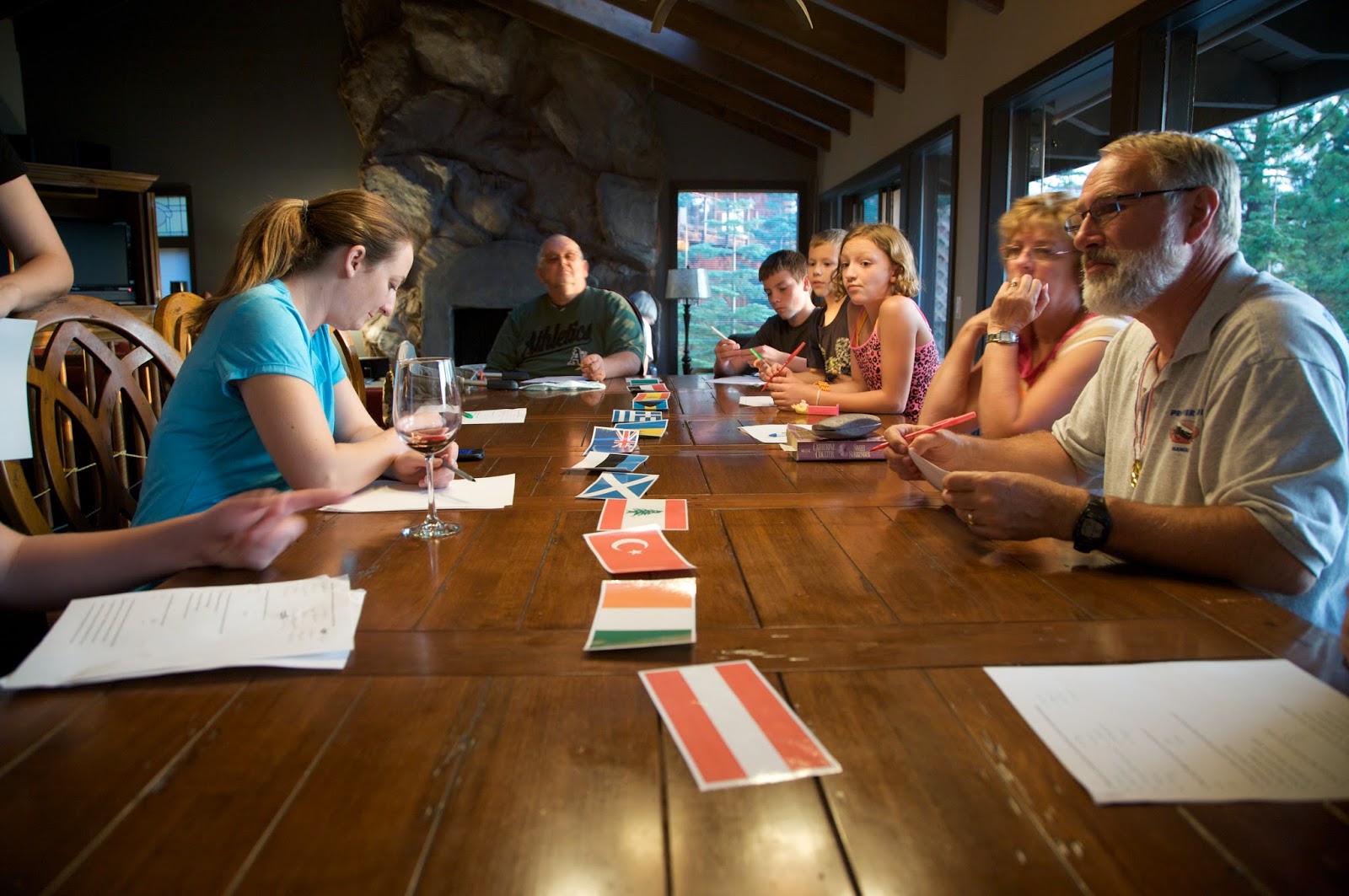 Kari won that final event, earning her 4th gold medal. It was no surprise that she was the overall winner of the Family Olympics - she did well in everything. Brian and I tied for bronze and Matthew got the silver. 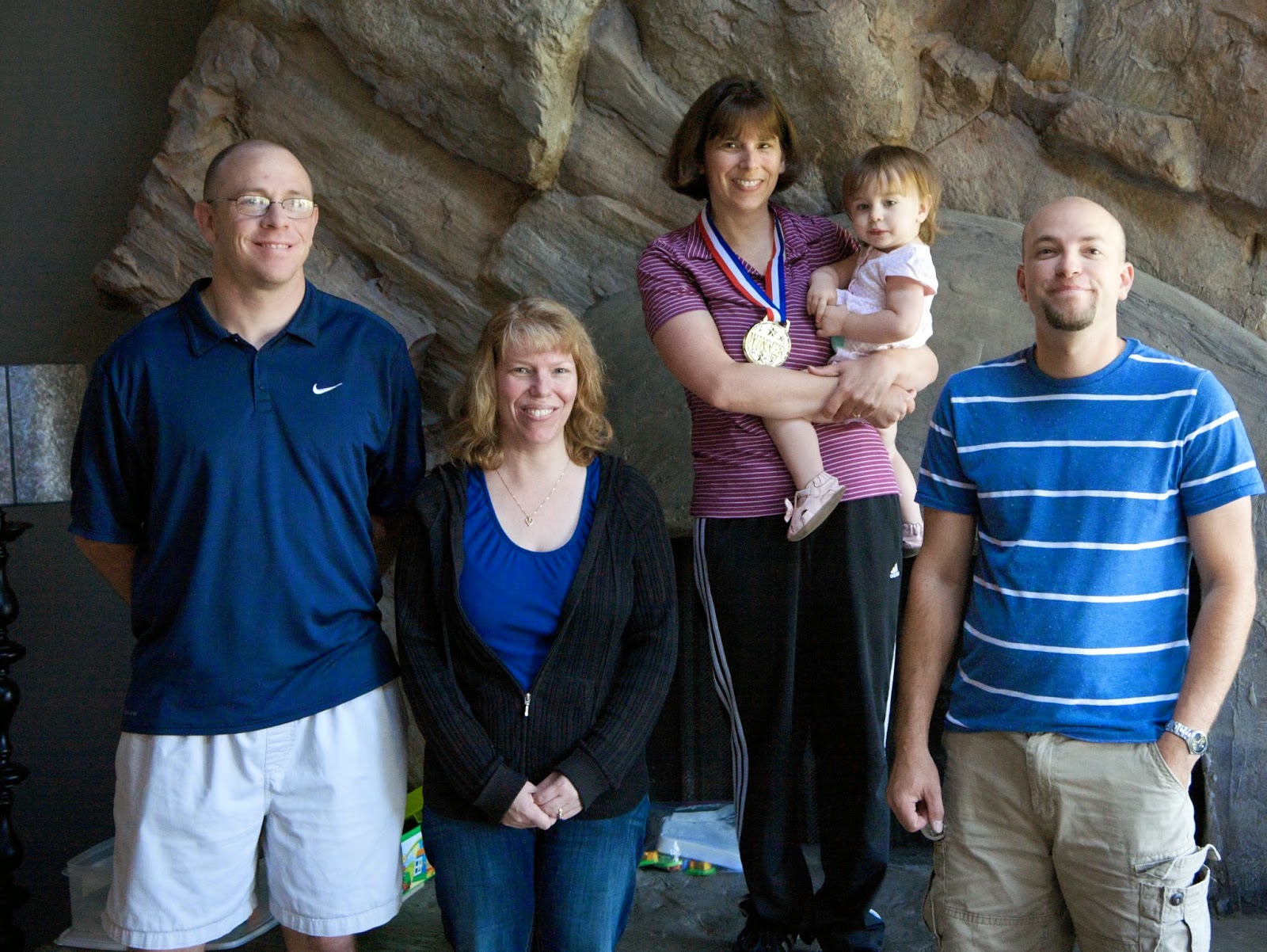 Huge thanks to Tim and Ginger for a super fun Family Olympics! Can't wait until next time!
Email ThisBlogThis!Share to TwitterShare to FacebookShare to Pinterest
Labels: Family Olympics