2 years 3 months 17 days is a long time to keep a secret. That's how long Steve and I have been waiting to share our first experience as volunteers for Mythbusters. Now that the episode has FINALLY aired, we are free to share all the behind-the-scenes details from our filming. This post talks about the application and selection process, so I'll pick up from there. 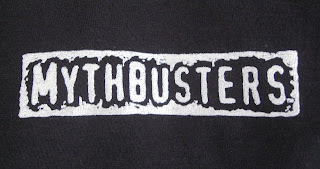 Two days before filming, we received a detailed list of what we needed to know. We were told to report to a specific parking lot on Mare Island by 8:00 am on filming day wearing plain clothes (no graphics, no logos, no artwork), closed-toe shoes, and no perfumes or colognes. Each of us was to bring a piece of carry-on luggage, as well as anything else we would normally carry onto a plane (purse, laptop, etc). Those items should contain whatever we would normally use to amuse ourselves during air travel (books, magazines, crossword puzzles, work, etc). We were told that Mythbusters would be providing snacks and drinks, but due to the size of the experiment, they were unable to provide lunch and that we needed to bring our own. We needed to bring government-issued ID as well.

On the morning of filming, Steve and I arrived at the location, got out of our car, and promptly returned to the car to grab heavy jackets. Once bundled up, we joined the huge line of volunteers (all with carry-on luggage) snaking around the building. After about 30 minutes of moving forward an inch at a time, we made it into the building and to the check-in station. There, the staff checked our ID, found us on a list, and then sent us to the next station where staff checked us from head to toe (including our luggage) for any logos, labels, graphics, icons, or anything else. They used color-coordinated gaff tape to cover any offending areas. Then, we were sent to one of about 20 huge tables to wait.

It took almost two hours before we were given our safety briefing. We still didn't know what we'd be doing. We were all wondering whether we'd be working with Adam and Jamie, or if it would be Tory, Grant and Kari. We found out the answer when Jamie came into the building and went down the aisles shaking hands with volunteers. He made it through about half the room before he got called away and we were told to pack up our stuff and get ready. We joined another huge line and shuffled out of our holding room, across an empty lot, and into an adjacent warehouse. When we entered, we were each handed a ticket. 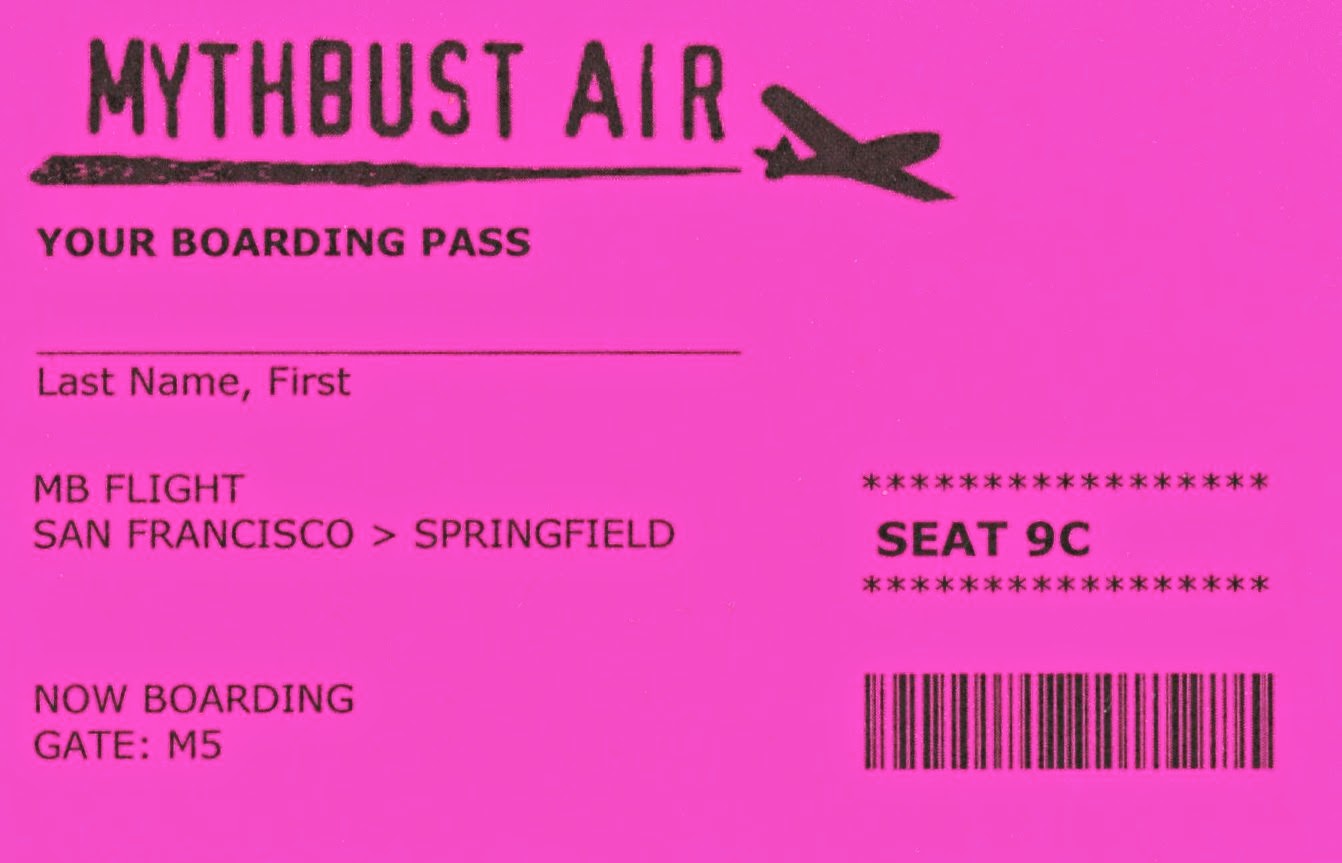 We entered a set that looked like an airport terminal, where Adam introduced us to the real-life flight attendants that would be helping with the experiment. He explained that we'd be testing the efficiency and ease of different methods of airplane boarding. First, we'd be doing the traditional back-to-front boarding method.

It took just under half an hour for all of us to board. As we deplaned, we passed by a voting station to indicate how we felt about that boarding procedure. We then received a second boarding card, did a second experiment with a different boarding method, and voted again. It was very interesting to watch everything going on; in a real boarding situation, I would have started reading the second I reached my seat, but instead I was enjoying watching Adam's antics, listening to the director, and watching the cameramen.

I appreciated that producers made sure some of the volunteers played the roles of 'difficult' passengers, such as the Aisle Coat Folder, the Guy Who Needs the Bathroom Immediately Even Though He's Been Waiting in the Terminal for Over an Hour, the Mom Juggling a Baby and Four Carry-Ons, and the Person Who Wants to Order a Drink Before Sitting. Still, there were a few things that made this experiment different from what real-life boarding would be. First and most significantly, none of us were traveling with children. Even though a few people were designated to hold an infant, there was no representation of a mom traveling alone with three kids and two car seats, or anything like that. There were no seniors, no disabled people, and nobody who couldn't understand English. We were all paying attention, happy to be there, and fully cooperative (which is clearly nothing like an actual plane boarding).

At the end of the day, they gathered all of us who were doing one day of filming, thanked us, and passed out t-shirts.

I only did one day of filming; Steve did both. Here are all of our tickets. As you can see, the two of us did four experiments together on the first day and Steve did three on the second day. 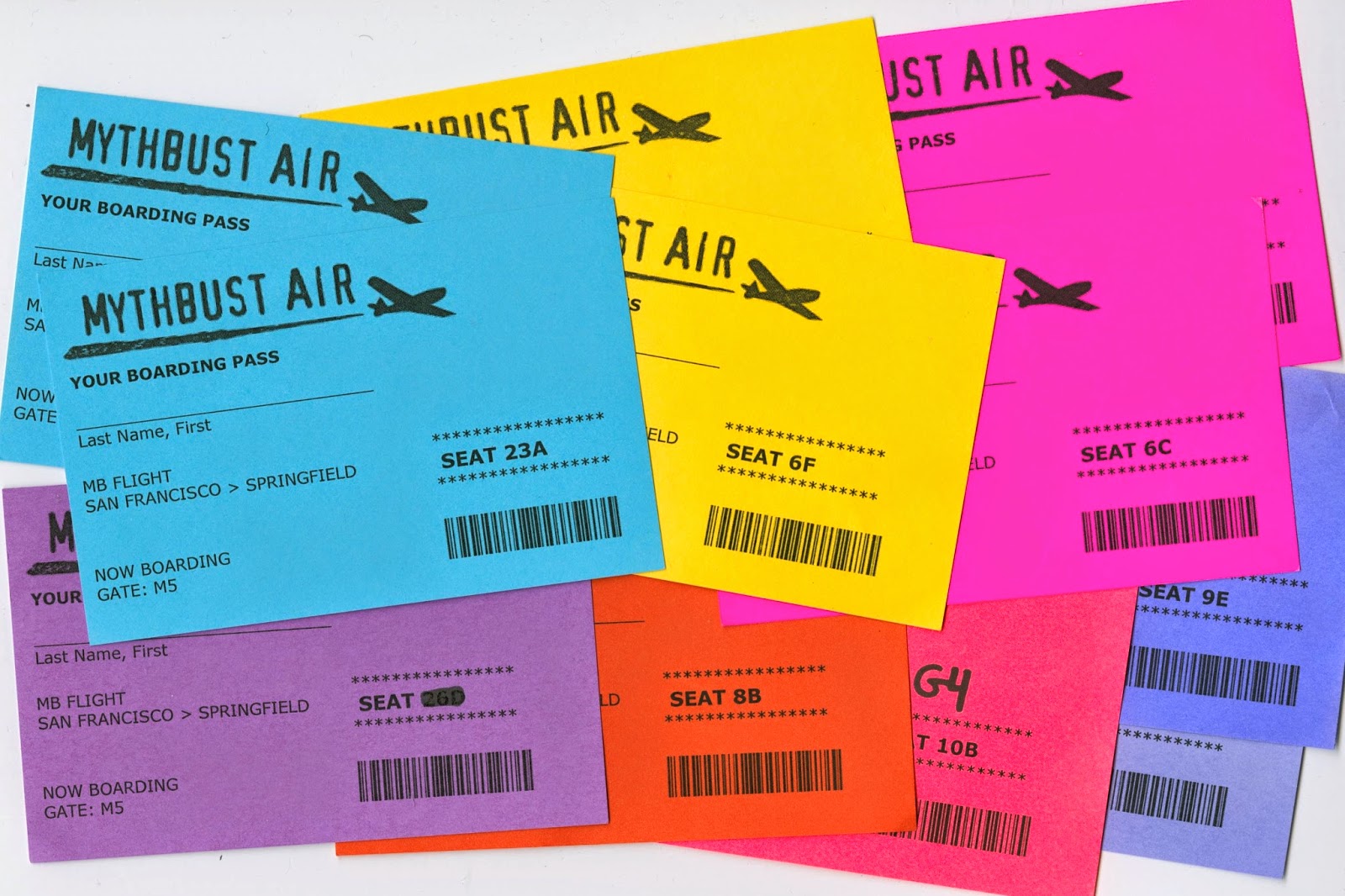 On the purple ticket at the bottom left, the seat assignment is scratched out. That was for the free-for-all, no assigned seating experiment. For every other experiment, we had assigned seats (for the record: 6C, 6F, 8B, 8F 9C, 9E, 9E again, 10B, 16A, and 23A). Neither of us ever randomly received the first class seats nor the difficult passenger cards.
After filming wrapped, the volunteers posed for this photo with Adam and Jamie. 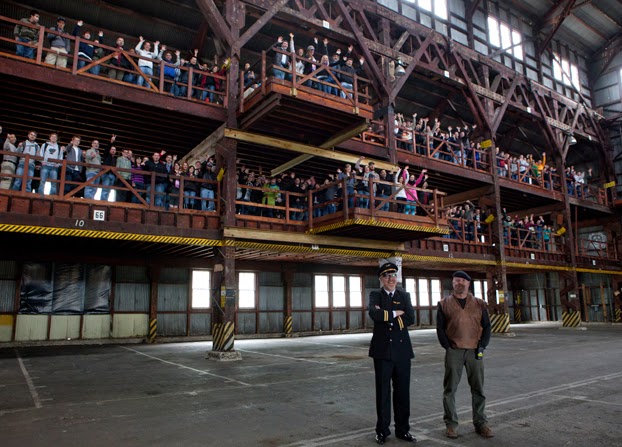 Watching the episode was a lot of fun. The results were exactly what we'd expected. We were hoping to actually see ourselves, but we didn't until we switched to slow-motion for one section and caught a glimpse of Steve. I think we would have been easier to spot if we hadn't gone back to the car for the black jackets that we wore all day long! If I ever volunteer for Mythbusters again, I'm going to wear the loudest and most distinctive clothes that I'm allowed to wear!

Alas, I doubt we (or anyone else) will be volunteering for Mythbusters again. Just like everyone else, I was absolutely shocked by the announcement that Tory, Grant and Kari are not part of Mythbusters anymore. I have a feeling that Adam and Jamie have one last season (which is almost certainly already filmed) and then the show will end. I hope I'm wrong.
Posted by Cindy deRosier at 5:00 AM