I made broccoli-cheese soup for dinner the other night. It was good. 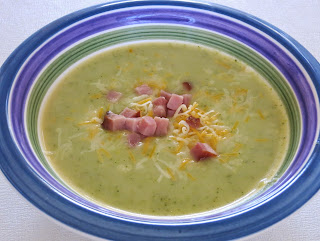 Trevor said it was good enough that I should take a picture and put it on the blog with an actual recipe so that I could make it again just like it was. I have a bad habit of making something tasty and not being able to duplicate it later because I rarely follow recipes and don't write down what I do when I wing it. So, here's my best attempt at writing down what I did. It's a big batch - enough for the three of us for 3 nights.

Melt butter in a large pot. Saute the onion in the butter until it is soft and golden. Add the cubed potatoes, the bouillon, and 4 cups of the water. Bring to a boil, then cover and reduce the heat to medium. Cook for approximately 15 minutes, or until the potatoes are fork-tender. While the potato mixture is cooking, chop the broccoli into small pieces. Put the remaining cup of water and the chopped broccoli into a microwave-safe container, cover, and cook for 3 minutes. The broccoli should be bright green and softened, but not mushy. Pour the broccoli and the cooking water in with the potatoes. While still over the heat, use an immersion blender to puree the soup. Remove the pot from the heat and stir in 3 c. of the shredded cheese (I used colby-jack). Add salt and pepper to taste. Ladle the soup into bowls and garnish with the remaining shredded cheese, plus cubed ham or croutons.
Email ThisBlogThis!Share to TwitterShare to FacebookShare to Pinterest
Labels: Recipes