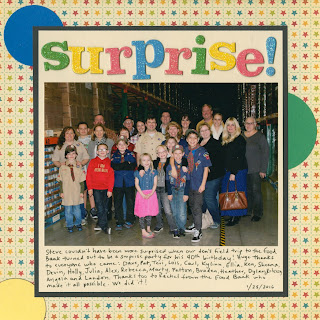 I don't know if other county food banks offer birthday parties like ours does, but it's absolutely something to check out. The Food Bank of Contra Costa and Solano offers free birthday parties for kids and adults in their warehouses. You provide your own food and cake, and the Food Bank provides a meaningful service project for the guests to do. We bagged produce for distribution during Steve's party, which was a lot of fun. They also provide information about hunger in the area and how they help. I asked guests to bring a donation to the Food Bank in lieu of gifts for Steve. The whole evening was a win for everyone. Thanks to everyone who made it great.
Email ThisBlogThis!Share to TwitterShare to FacebookShare to Pinterest
Labels: 40-4-Steve, Layouts