“Bread” - The Fail That Wasn't

I really enjoy trying out new recipes, even if I'm sure they're going to fail. Such was the case with a recipe simply called "Bread" that I found on Cooks.com. The ingredient list includes exactly four items: butter, sugar, yeast and milk. You don't need much baking experience to know that mixing any amounts of those four items is not going to yield anything that would traditionally be called bread. Without some sort of flour or flour-like substance, you simply can't turn yeasty, sweet, milky butter into bread.

However, four sentences into the cooking instructions mentions self-rising flour. Aha! Now we potentially have the makings of a bread. There's no amount given (simply 'enough'), but at least bread is now possible. But several other things about the recipe gave me pause. First, it's unusual to have a recipe with yeast but absolutely no rising time. And doubly weird to mix yeast and self-rising flour in the same recipe. And even weirder to melt AN ENTIRE STICK of butter in a loaf pan, then pour it out and save it to pour on top of the dough before baking.

Naturally, I decided to try this recipe when we'd have guests over. Dinner for 12, in fact. Because what fun is a weird recipe that can't possibly work if you don't have 11 dining companions to share it with? None, I say.

I mixed up the bread dough, opting to put in slightly over 2 cups of self-rising flour. With no guidelines for how much was 'enough', I could only make my best guess. Then I poured the melted butter over the top. I'm a big fan of butter, but this did not look promising. 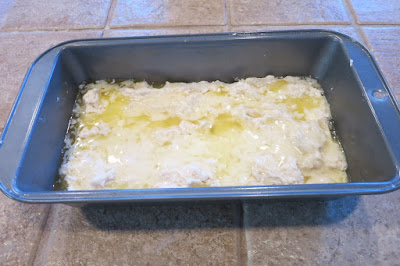 I popped the bread into the oven. During the required 30 minutes, many of my guests peeked through the oven door to see if the butter-pool would somehow turn the dough into bread. No one was especially optimistic, but.... 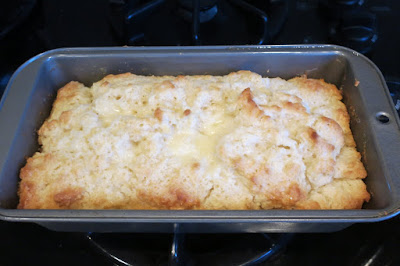 It worked! The loaf smelled amazing and had a buttery, crispy top over a biscuit-like bread. It was very rich, so I cut it into fairly small pieces and advised that no one bother buttering it. Next time I'll try a bit less butter. 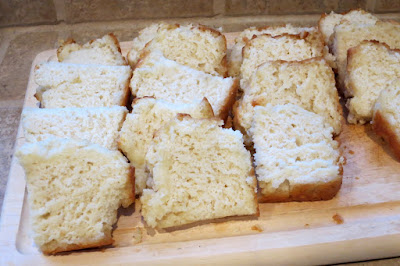 I couldn't believe it. I was sure we had a Fail on our hands, but it turned out to be The Fail That Wasn't. 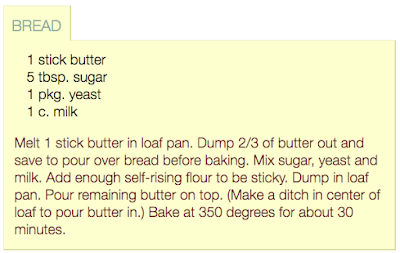