The Blue & Gold Cake (aka, Adventures with EasyMold)

Along with the Super Scout table decorations, Trevor also made a cake for the cake auction at the Cub Scout Blue & Gold. In past years, he's made a Snake Cake and a Pinewood Derby themed cake (which didn't actually make it to the Blue & Gold... story in the link). He was having trouble coming up with a design for this year's cake, so I told him to look at his pins and other awards to see if there was one that would be fun to try to make. Success. He sketched out a design that of a diamond-shaped cake with the Cub Scout insignia. Here's the proud Scout with his completed cake. 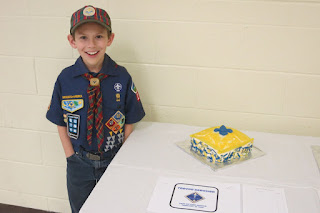 It's hard to tell from this photo, but it's a 2-layer cake covered in white frosting, edged with yellow licorice, with yellow sanding sugar on the top, blue and yellow Candy Melts shards on the sides, and a large blue Candy Melts fleur-de-lis on the top.

That fleur-de-lis is where the creative part of this project comes in. Together, Trevor and I brainstormed a bunch of ways to make the insignia on top. Piping it with frosting? 'Drawing' it with candies? Making a stencil and adding blue sprinkles? Suddenly, I remembered this: 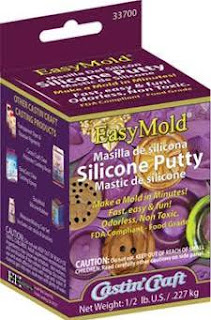 I'd received this box of food-grade silicone mold material as part of a class at CHA 2015 and hadn't needed it in 13 months. It would be perfect to make a mold for candy! I'd recently bought a chipboard fleur-de-lis to use keep on hand as a tracer or mask and hadn't used it yet. That would be ideal for making the mold. We read through the instructions and prepared to make the mold. 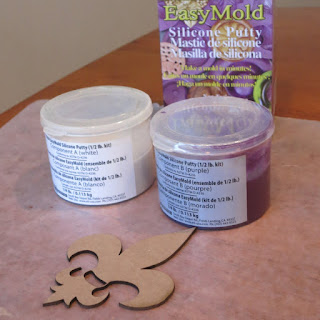 It was really easy. Equal parts white and purple, mix until combined, flatten it out, and press the fleur-de-lis in. 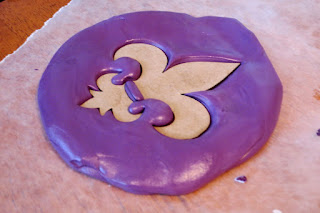 We left it alone for a few minutes, then removed the fleur-de-lis. The mold didn't look great, but it did look functional. Next time I'll take an extra second to roll out the silicone properly and trim the edges before it sets! Newbie error. 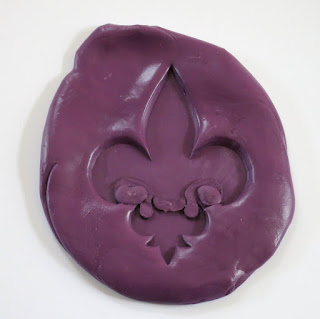 We wanted the chocolate to unmold in one piece, but it was obvious that it was going to break into a top and bottom section, so I carefully trimmed out the protruding bits from the center allow the finished piece to be one solid piece. I knew that wouldn't give a completely clean look, but no matter. When the chocolate came out of the mold (in one piece!), I told Trevor that we could carve out the excess to make it look a little neater, but he was happy with how it looked. Sounds good to me! Here's a bird's eye view of the top of his cake. 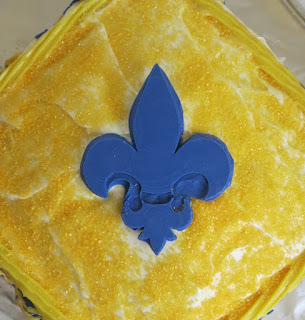 Now that I've tried the EasyMold, I'm eager to try it again! I don't have any ideas of what to mold though. I'm open to suggestions!
Email ThisBlogThis!Share to TwitterShare to FacebookShare to Pinterest
Labels: Cake, Cub Scouts, Products I Love