For the final day of Bunny Week 2016, Trevor made a rabbit finger puppet. 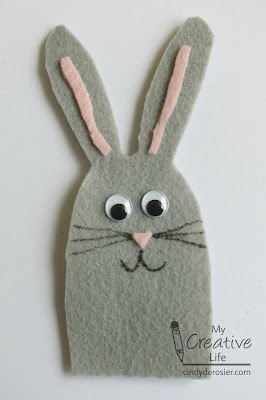 The inspiration from this project came from Crafting with Felt (affiliate link).

The fine folks from LeisureArts gave me this book to review. I handed it to Trevor and asked him to mark the projects that interested him. When he returned it to me, there were post-it notes on almost every page! He explained that for some of the projects he wanted to follow the directions exactly, but for others he had his own ideas of how to change them. Awesome!

For me, craft books like this are more about inspiration than exact steps and patterns, but I do appreciate when a book makes it easy for someone to follow along step-by-step. This book does exactly that. It has beautiful pictures and clear supply lists, as well as an excellent photo-based table of contents. The text is easy to understand. The projects are varied, with plenty that would appeal to both genders. While the book does not have a suggested age, I'd say that it is appropriate for ages 7 and up.

Trevor (age 9) was able to make his bunny version of the monster finger puppet independently. He read the supply list and directions from the book, looked at their patterns for monsters, and then made his own rabbit pattern. Here is his completed puppet sitting on the open book: 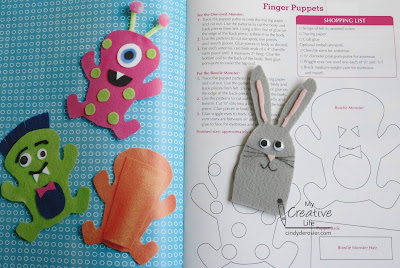 1. Draw a simple rabbit shape on a scrap of paper. Use it to cut out a rabbit from the grey felt.

2. Cut a rectangle of felt that just smaller than the body of the rabbit. This is where your finger will go. Use a strong craft glue or hot glue to attach it on three sides, leaving room for your finger at the bottom.

3. Cut two thin rectangles of grey felt to go behind the ears. They provide stability so that the ears don't flop down. 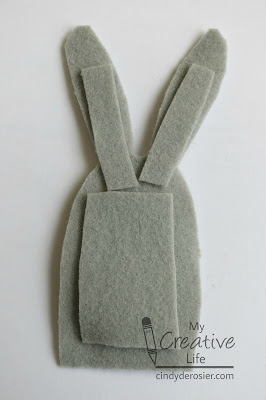 4. Turn the rabbit over so the front is facing up. Cut thin strips of pink felt and glue them onto the ears. Cut a tiny triangle of pink felt to make the nose.

5. Glue the googly eyes in place.

6. Draw a mouth and whiskers.