We live about 45 miles from San Francisco, so we have been there many, many times, but it was great fun to explore the city with a first-timer. At Andy's request, we started the day with a cable car ride... which was something neither Steve, Trevor, nor I had ever done! I guess when you live close enough, you don't always do the touristy things that you would when visiting on a vacation. Trevor and I started an alphabetical photo contest to pass time while we waited and continued it throughout the day. So much fun! From the cable car stop, we walked to Fisherman's Wharf, had lunch at Boudin, and watched the sea lions at Pier 39. From there, we drove to Ft. Point and toured, then walked across the Golden Gate Bridge. No matter how many times I walk across it, I'm always surprised at how cold and windy it is compared to the rest of the city! We drove out of SF over the Golden Gate, then stopped for In N Out burgers on the way home so that Andy could try another iconic California item. It was a fantastic day. 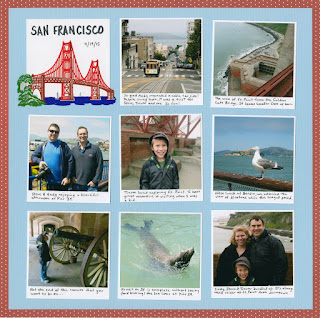 When it came time to scrap the day, I decided to go with a grid-style layout inspired by Polaroid photos. I cropped each picture, then matted it in white with a larger border at the bottom to house the journaling. I glued them haphazardly to the page (which made me twitch a bit), then added a title card in my handwriting with a laser-cut Mrs. Grossman's sticker of the Golden Gate Bridge. It was a really fun page to put together.
Email ThisBlogThis!Share to TwitterShare to FacebookShare to Pinterest
Labels: Layouts, Steve, Trevor, US Travel