We had our 3rd Annual Cookie Bake-Off recently. I dreamed up the competition in 2014 when my friend Nancy and her kids, Marco and Julia, came from Colorado to visit. We held our 2nd annual competition last year when we went to visit them in Colorado. Each time, I made a big batch of plain cookie dough and split it into equal parts for each contestant to enhance with the mix-ins of his or her choosing. After the cookies were baked, each did a presentation to the group, revealing the name of the creation and the ingredients that went into it. Then we voted anonymously, awarding each cookie a score between 1 to 10. The winner was the person with the highest score. In 2014, Julia won the inaugural event. In 2015, Nancy captured the win.

Steve recently brewed up a batch of beer for a contest his homebrew club is having, which resulted in a large amount of spent grain. I've enjoyed experimenting with spent grain bread and spent grain vegan burgers but was ready to try something new... like cookies! I didn't know if spent grain cookies was a thing, so I turned to Google. Sure enough! I chose a promising recipe and gathered the ingredients.

I hadn't started out planning to do a cookie contest. We won't be seeing Nancy and the kids this summer, so I hadn't been thinking about the contest at all. But as I was making the dough, it occurred to me that it would be fun to divide up the dough and make different variations, comparing them with the recipe as written. Trevor's friend Landon was over, so I asked the boys if they wanted to do a cookie bake-off. Silly question - of course they did!

I made a double batch of cookie dough and split it into four equal parts. I made one part as written in the recipe (scaling down the mix-ins, of course). Then I gathered up everything in our pantry that a person could possibly think about adding to cookies. 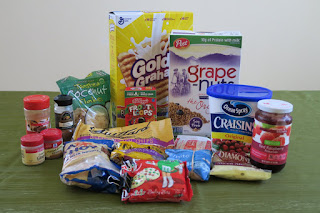 Trevor, Landon and I each chose our mix-ins privately. I baked up all four batches, keeping all variables the same. Each batch was scooped with the same scoop for consistency and baked on the same Silpat at the same temperature for the same length of time. Despite all that consistency, they came out completely different. Some were mounded and tall; others were completely flat. Some were moist and others were crisp.

After the cookies cooled, I put them on a tray. 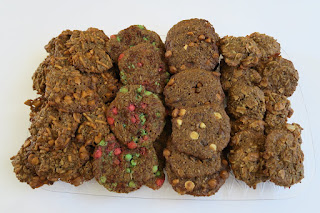 From the left, Cookie A had butterscotch chips, chow mein noodles, and Grape Nuts. Cookie B had Christmas M&Ms mixed in and cinnamon sprinkled on top. Cookie C had ginger, cinnamon, allspice, pumpkin pie spice, chocolate chips, butterscotch chips, and white chocolate chips. Cookie D was the original recipe. Unlike our usual procedure, I did not let anyone know whose cookie was whose. The boys each recognized their own, of course, but they had no idea which was the original recipe and who made the others. I read the ingredients in each rather than having each baker present his or her own.

Rather than have them rate each cookie on a 1-10 scale, I asked the judges (Trevor, Landon, Steve and me) to privately rank the cookies in order by their assigned letter. This eliminated the problems of weird fractional and decimal parts, as well as handling what would happen if one person gave their own a 10 and everyone else's a 1. 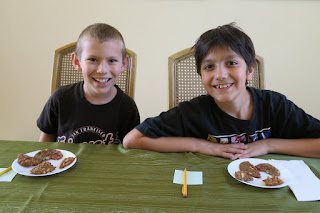 I assigned 4, 3, 2 or 1 points to each cookie based on each person's rankings, then added the points. There was a clear winner: Trevor's Spicy Chocolate Cookies (Cookie C)! Congratulations! 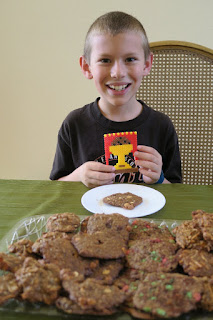 Landon's M&M cookies (Cookie B) came in a very close second. My butterscotch, nut and chow mein noodle cookies (A) were third and the original recipe with coconut and nuts (D) came in a distant fourth. Fascinating! All four cookies were good. Which sounds the best to you?
Email ThisBlogThis!Share to TwitterShare to FacebookShare to Pinterest
Labels: Cooking Competition, Recipes