The Best (and Worst) Ways to Travel with Kids

New parents discover almost immediately that going somewhere with kids and going somewhere without kids are as different as night and day. Even ordinary errands become a production when there's a baby or toddler involved. Vacations, even more so. Choosing the best mode of transportation can have a huge effect on how much you and the other adult(s) enjoy the trip. 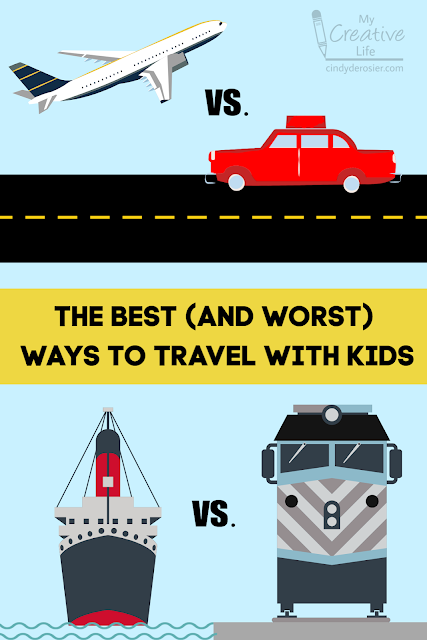 While I've titled this post "The Best (and Worst) Ways to Travel with Kids," there is no one choice that is universally better or worse. Many factors contribute to making different modes of transportation more or less appealing for your specific situation. I'm drawing on a lifetime of traveling with kids, first as Miss Jones (taking students to destinations within California and across the country), then as Aunt Cindy (traveling with nephew Timothy and, eventually, niece Allison), and now as Mom. I've traveled with kids in cars, buses, planes, taxis, trains, ferries, ships, and trams. Below are my thoughts on the pros and cons of traveling by plane, car, ship, and train.

The obvious advantage to traveling by plane is that it is much faster than every other option. Trips that would take days or even weeks take hours instead. Planes can be very exciting and magical for young children. Families with young children get preferential boarding, which can be nice.


Pretty much everything about plane travel, besides the speed, is a giant pain in the neck with young kids. You have to limit the amount of things you bring, depending on the specific airline's policies. Security lines and waiting at the gate are hard for kids who are excited to get on a plane. Once they're on the plane, it is cramped, they can't move around, and your own trip becomes all about making sure the kids don't disturb everyone around them. Preferential boarding can mean spending an extra 30+ minutes in cramped seats. Installing a car seat on a plane is not easy; having a lap baby is not particularly comfortable nor safe. Changing a diaper on a plane is a nightmare; the only thing worse is dealing with a newly potty-trained preschooler on a plane. Oh, when a baby's ears hurt and he's too busy screaming to take a bottle to relieve the pressure - that's pretty terrible, too.

In my experience, flying with toddlers and preschool-age children is the worst. Babies are relatively easy. Once kids hit school age, they are much better air travelers. Trevor and I have flown together without Steve a couple of times; by age 10, flying with Trevor was no more difficult than flying with an adult companion. Flying across the country with a plane full of 5th graders wasn't a problem either. Everything changes when they can entertain themselves and don't need an escort to the bathroom.

The best thing about car travel is that you can go at your own pace. If your child needs frequent stops to run around, or use the bathroom, or you need to change a diaper, or whatever... it's not a problem. You can stop. You can set your own schedule and take whatever route you want. There are no limits on what you can bring with you, as long as it fits in your car. You don't have to worry about the kids disturbing others; they may drive YOU crazy, but at least you won't have strangers glaring at you if the kids aren't perfectly behaved. Car travel is usually cheaper than plane, train, or ship travel when you have 3+ passengers.


Car travel can be slow, particularly if you're making frequent stops to let a squirmy child burn off energy. The seats are still cramped and you can't move around while you're traveling. Kids get bored; babies want to be held. Breastfeeding is impossible. (Ask me about the 8-hour drive we took when Trevor was an infant and I had to manually pump in the car nearly constantly and feed him bottles. Better yet, don't. I'm suppressing that memory.)

Just like with flying, car travel with kids gets much easier as they get older. By the time they're school age (and in some cases, sooner), kids can easily entertain themselves in the car. (If you don't want them using electronics and reading causes motion sickness, audiobooks are a lifesaver. Our family is all about audiobooks during car travel.) Better bladder control means they can use the bathroom during stops you'd be making anyway, versus the newly-potty-trained kid who needs to go randomly with 15 seconds of notice.

Traveling by ship (and by that I mean a ferry, steamboat, cruise ship, etc.) can be a great option with kids. The biggest plus is that there is space to move around and no need to keep kids buckled into a confined space. Kids enjoy watching the water and exploring the nooks and crannies of a ship. The bigger the ship, the more there is to explore and do. On a cruise ship, there is almost always a kids' room with tons of toys and games and organized programming. Unlike on a plane or in a car, being on a large ship is like having a floating hotel that takes you from place to place while you do whatever you want.


With young children, safety is a major concern with ship travel. Obviously, you need to watch them closely around railings, stairs, and all the places you normally would on land... with the added factor that the movement of a ship can cause even sure-footed kids to slip or fall. Newly walking toddlers may struggle keeping their balance on a ship. Trevor went on his first cruise just after his 1st birthday. We had a good time, but it was less than ideal. It was so frustrating to see all the cool amenities, activities, etc. that we couldn't take advantage of because we had to watch our toddler. We were welcome to use the kids' room, which was nice, but we had to stay with Trevor. Most lines don't let you drop off children until they are at least three. We had no idea Trevor was afraid of foghorns, but he screamed in terror every time one sounded, which was frequently as we sailed out of San Francisco. We had to majorly overpack diapers and other baby supplies, as we wouldn't be able to get those onboard if we ran out.


Once your child is three and can be checked in and out of the kids' room, traveling by cruise ship is awesome. And it only gets better as the kids get older. Parents can have a few hours to relax and kids can craft and play and run around with others their age. Typically, kids' rooms are open for 3 hours in the morning, 3 hours in the afternoon, and 3 hours in the evening and you're free to use any or all of that time.

Traveling by train combines one major benefit of airplanes (exciting for most young children) with the freedom to walk around as needed and not stay confined to a seat the whole time. Unlike air travel, there is virtually no security to deal with, and thus no long waits in long lines, and you're free to carry on liquids and that yogurt your child loves that planes won't allow. There is a lot to see from a train, and many children are lulled to sleep by the motion. Even when you are seated, most trains have much roomier seats than airplanes, and they often have tables for games, coloring, or other play.


Train travel tends to be quite expensive. Unlike with a car, you can't determine your own schedule or pull over when you want to stop. You still have to make sure the kids aren't disturbing other passengers. The bathrooms are not great for changing diapers or supervising potty-trained preschoolers.


As with everything, train travel is much easier as your kids get older.

I'd love to hear your thoughts about transportation options when traveling with kids. What's your favorite (or least-favorite) and why?
Email ThisBlogThis!Share to TwitterShare to FacebookShare to Pinterest
Labels: Travel Tips