"Watch Me Pull a Rabbit Out of My Hat!" Craft

Bullwinkle never did manage to pull out a rabbit out of his hat. I learned from this fun article that there were only five things that ever came out- a lion, a rhino, a bear, a tiger, and Rocky. No rabbit.

Here's a fun craft for your own "Watch me pull a rabbit out of my hat!" moment. The rabbit puppet moves; hide him in the hat, and then pull him out with plenty of drama. 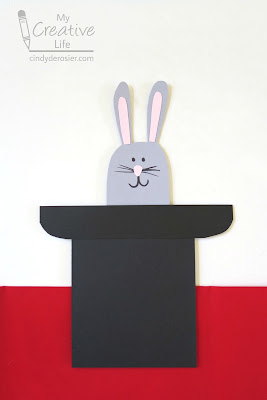 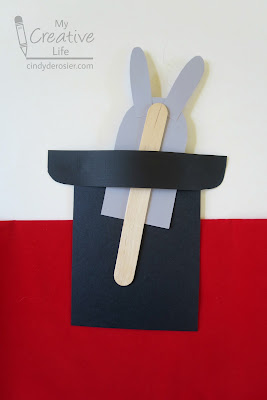 "Watch Me Pull a Rabbit Out of My Hat!"

Cut a black rectangle for the main part of the hat, then two identical pieces for the brim of the hat. Glue one piece to the front of the hat. Flip the hat so that the back is facing up and glue the second brim piece ONLY to the ends of the other brim piece. You're making a pocket so the rabbit can slide out of the hat.

Cut a grey rabbit. Add pink inner ears and a pink nose, then add the eyes, mouth, and whiskers with the Sharpie. Glue the rabbit to the craft stick.