Lime Slice Felt Coaster (and a Return to Brazilian Lemonade)

Since the lockdown started, we've been getting a produce box every ten days from our local beloved farm/market. Every box has been a delight, stuffed with beautiful fruits and veggies with a value that far exceeds the price we pay. Our latest box has some gorgeous limes, which reminded me of exactly how bad my previous photos of Brazilian Lemonade were. So I made a batch and took a new photo. 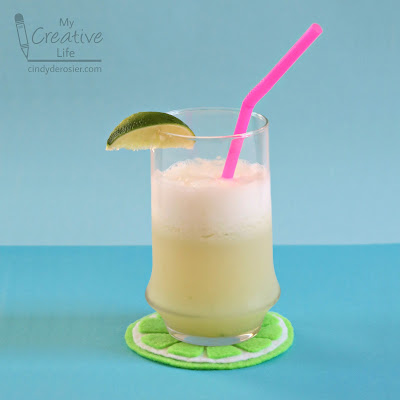 As you can see from my photo, my Brazilian Lemonade is sitting on a lime slice felt coaster. It is the second of many fruit slice coasters I've been sewing. This one is very similar to the lemon coaster, but there is an important difference (besides the color). Did you know that while most lemons have 8 or 9 segments, most limes have 10 to 12? I made my lime with 10 segments. Affiliate links below. 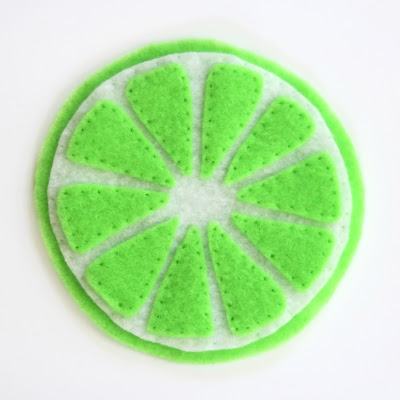 Set the large green circle and the white circle aside.

Fold the smaller light green circle in half, then cut along the fold. Cut each half into 5 triangles. They don't need to be identical in size - they aren't in nature! Snip the edges of each triangle so they are rounded. Space them evenly on the white circle, trimming if necessary until they resemble the segments of a lime.

Use a light green thread and a very short running stitch to sew the lime segments to the white circle. Start at the tip of one segment, work around it until you reach the tip again, then move over to the next segment.

When all the segments are attached, use white thread and the same short running stitch to attach the white circle to the large green circle.
Posted by Cindy deRosier at 5:00 AM