Over the years, I've used the occasion of Trevor's birthday to force him to give something up.  About a week before he turned two, I prepped him for the fact that on his birthday he'd be giving his bottles away.  He did not want to give up his bottles, but I didn't present it as a choice.  I let him pick out some special new sippy cups that he'd be allowed to use once his bottles were gone.  I didn't expect it, but he picked which baby he wanted to receive his bottles.  (That baby, Kieran, already had bottles, but his mom Holly did a perfect job of thanking Trevor profusely when he presented her with his collection of bottles on his 2nd birthday.)

On Trevor's 3rd birthday, we went cold turkey with diapers.  I'd already started potty training, but he wasn't all that interested, which was frustrating.  I made it clear to him that every diaper would be leaving the house on his 3rd birthday and I followed through with that.  That week was really tough (we mostly stayed home and did multiple loads of laundry each day), but within the week he was totally and completely potty trained.

Fast forward to this past June.  For several months, I told Trevor that the training wheels would be coming off his bike on his 6th birthday.  He is a *very* cautious child and he was extremely nervous about biking on just two wheels, but he knew I wasn't kidding about the training wheels going away on his birthday.  I took him to a park with a straight, wide and level path and I repeatedly ran along with him as he tried biking on two wheels.  We did the same thing the next day.  I took these pictures on the third day: 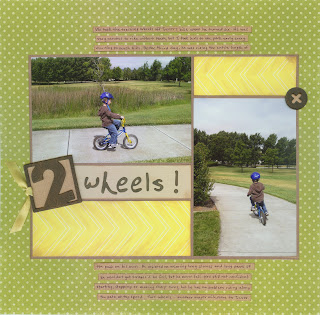 So proud of him.  Another major milestone!
Email ThisBlogThis!Share to TwitterShare to FacebookShare to Pinterest
Labels: Layouts