Among the cool things I found in my childhood closet was this bald eagle craft. 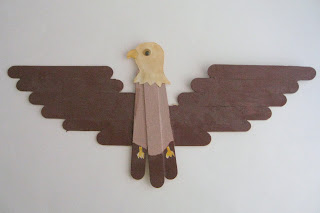 I have a vague recollection of making it at school, possibly in 3rd grade.  I am a proud alumna of Joe Michell Elementary, home of the Eagles.  I love that our teachers taught us about our school mascot.

When Trevor saw my eagle, he wanted to make one.  (Of course.)  Supplies: 14 popsicle sticks, white glue, brown and cream paints, scissors, white cardstock, a yellow pen (or yellow cardstock), and a googly eye. 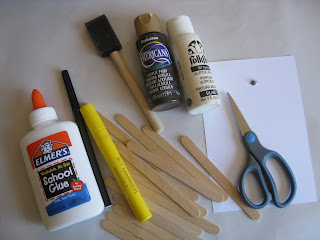 The first step was to arrange eleven popsicle sticks to form the wings.  Trevor wanted me to break one stick for him so that the eagle's wingspan would be narrower.  In retrospect, I should have broken two sticks so that he could have hidden the break under the body of the eagle.

Once the sticks were laid out, we put glue along the edges to glue them together.  (We did this on waxed paper.)  Trevor glued the other three sticks together to form the eagle's body.  We added a strip of cardstock to the wings to add stability and help join the broken popsicle stick. 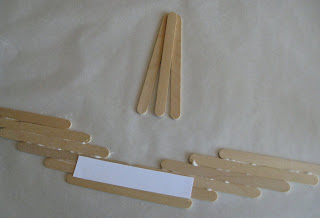 Trevor painted the wings and tail feathers dark brown.  Then he added a bit of cream paint to the dark brown and used it for the eagle's body. 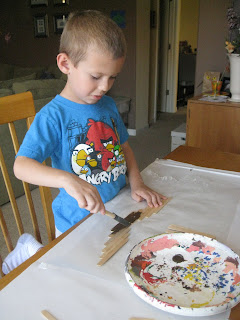 While the paint was drying, Trevor cut out a white head and yellow beak and feet.  He added a googly eye and glued the whole thing together.  Trevor absolutely loves his eagle! 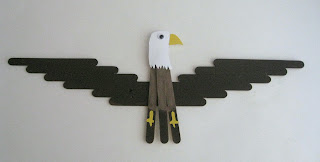 And now, a Mythbusters update!  Every day someone asks me if I know when our Mythbusters episode is going to air, so I thought it would be easier to write about it here than continue to tell you all one by one.  (Read here if you missed the original post about my upcoming appearance on Mythbusters.)  Brief clips from our episode are showing in a fall preview on both their website and the Discovery Channel, which is pretty cool.  The new episodes are going to start airing in October.  Exact dates have not been published yet, but as soon as I know I will spread the word.  I'm really excited!
Email ThisBlogThis!Share to TwitterShare to FacebookShare to Pinterest
Labels: Crafts for Kids, Memory Lane, Mythbusters