I'm finally finishing up the photos from Trevor's 6th birthday eleven months ago.  We're deep into party preparation for his 7th birthday, so it's definitely time to get last year's pictures into the scrapbook.


I'd already done my usual three birthday layouts (his birthday portrait, the family party, and the friend party), but I had one more story to tell.  One of the most memorable things about Trevor's birthday was when he bit into his cupcake at his friend party and his tooth popped out.  I thought about including it with the rest of the pictures from that party, but I thought it deserved its own page.  If his tooth had come out any other day, I wouldn't have thought twice about scrapping it. No reason to skip that story just because it happened at an event I was already scrapping. 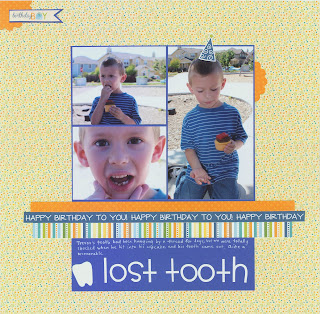 I love the way the layout came out.  One of my favorite parts is the party hat I cut from patterned paper and put on Trevor's head.  It makes me smile.
Posted by Cindy deRosier at 5:00 AM
Email ThisBlogThis!Share to TwitterShare to FacebookShare to Pinterest
Labels: Layouts