J is for Jellyfish

Yesterday, I showed you how different media perform on Riso film.  My next experiment was with spray mist.  I sprayed several different colors on the rough side of two chunks of Riso film and let them dry.  It worked perfectly!  It was beautifully iridescent, ideal to make the jellyfish I've been wanting to make as my J craft. 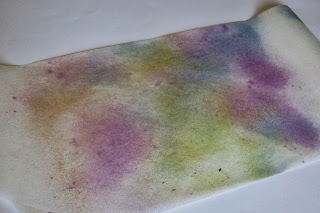 I folded the film in half and traced a large circle, cutting out the two circles at the same time. I used a needle to put a single strand of pink embroidery floss through the center of one circle, then glued the outer edges of the two circles together to make the body of the jellyfish. 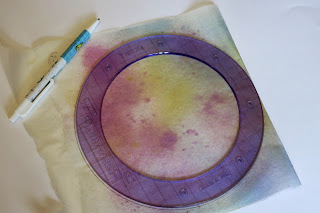 I set the body aside and cut strips from the second chunk of Riso film. 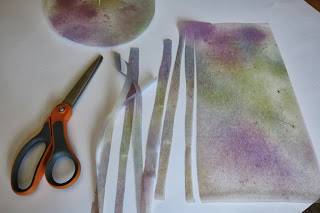 I turned the jellyfish upside down and randomly attached the tentacles using my favorite liquid adhesive, Martha Stewart's Glittering Glue. 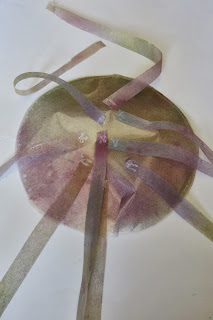 I taped the string to the roof of my photo tent and took a few pictures.  These don't even come close to capturing how gorgeous the color and shine is.  A whole classroom of these would look stunning. 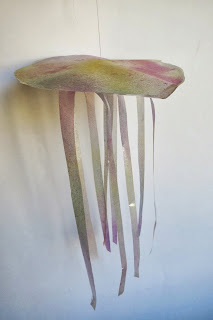 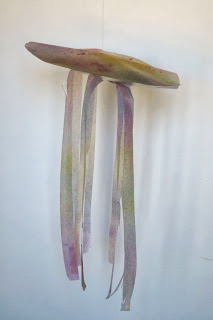 I hope this inspired some of you teachers out there to do something with those rolls of Riso film instead of just throwing them out!
Email ThisBlogThis!Share to TwitterShare to FacebookShare to Pinterest
Labels: Crafts for Kids, Trash to Treasure