Trevor is in his second year of Cub Scouts. We started the year in a new-to-us Pack and they have blown us away with their awesome activities. This week was their Cubanapolis.

We'd never heard of a Cubanapolis before. We were told that each boy creates a vehicle from a cardboard box and wears it during a race... a Cub Scout Indianapolis. The boys have "pit stops" during the race where they have to do various tasks. We were given a cardboard box and told to have Trevor wear safety goggles to the event.


With only that information, we headed home to design a car. Trevor sketched out a blue racecar with a pointy front and a spoiler with the number 7 on the side. Steve and I helped him build the shape (he's not safe with a box cutter yet), but the design was totally his. We had green spray paint at home but no blue, so he decided to make it green. We added paper plate wheels (painted black and silver), #7 (his age and birthdate), and a cool license plate. The last step was adding straps to the car so that he wouldn't have to hold it while he ran. Here's the proud builder: 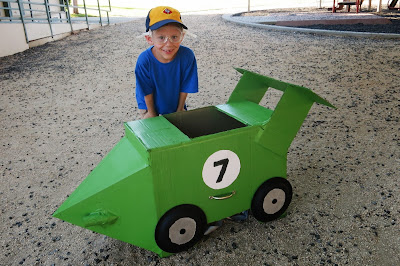 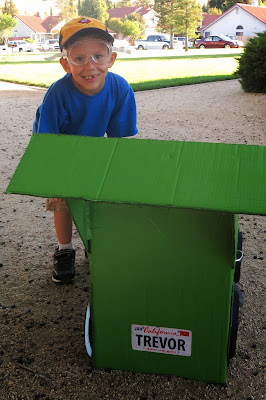 After the opening flag ceremony and other business, it was time for the race. The Tigers (first graders) went first, then it was time for Trevor and the rest of the Wolves (second graders) to race. 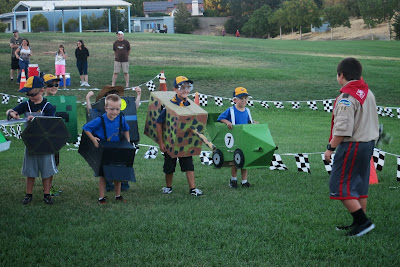 The three pit stops were very clever. At the first pit stop, each boy had his "windshield" cleaned with a spray bottle and paper towel. Ah, so that was the purpose of the safety goggles! 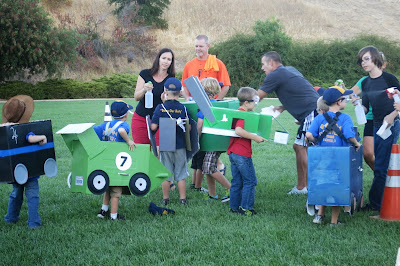 I wasn't able to get pictures of the 2nd or 3rd pit stops. At the second one, the boys had their tires checked. They had to get out of their cars, lay on their backs, and have the bottom of their shoes 'inspected.' At the 3rd pit stop, they had to fuel up by drinking a glass of water. Here's Trevor about to cross the finish line. 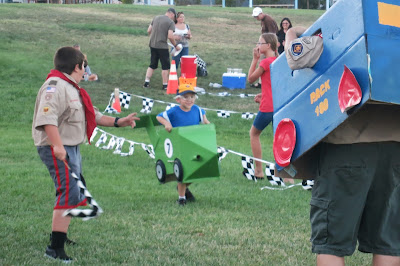 Once all the Wolves had finished their race, they cleared the track for the next age group. Here's Trevor walking away to park his car in the designated parking lot. 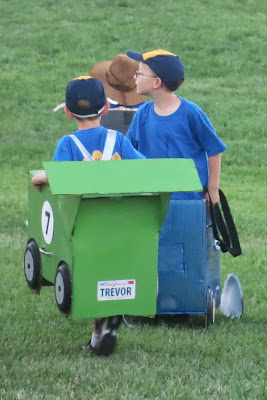 My favorite part was seeing the amazing creativity of all the boys. There were approximately 50 boys racing and each vehicle was completely unique.

Trevor had a blast building and racing his Cubanapolis car. Can't wait until next year!
Posted by Cindy deRosier at 5:00 AM