Tell All the Teachers You Know about this *FREE* Art Material...

I have a really hard time watching perfectly good things be thrown away.  And by "perfectly good," I mean things like empty cardboard tubes, plastic bottle tops, ribbons, glass jars, and other treasures that can be transformed into something awesome.  My mom was a preschool teacher, so we grew up making a lot of cool crafts out of items that other people threw out without a thought.  Anything we didn't use went into a box at her school labeled "Beautiful Junk."  The preschoolers would make all sorts of neat stuff using the items from that box.

My belief that just about anything can become a cool craft means that friends give me a lot of weird castoffs (like the rubber finger tips, for example).  It also means that I'm always on the lookout to rescue something interesting from the trash.  Here's an example: 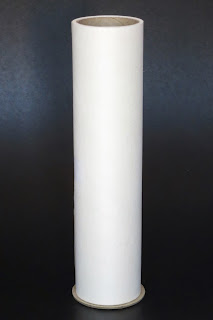 If you work in a school or in an office with a large volume of copying, you probably recognize it. It is an "empty" roll from a Riso machine.  I spend a lot of time at Trevor's school and help with copying fairly often, but I'd never seen anyone change the roll in the Riso until recently.  I was shocked at how much material was left on the "empty" roll.  It looked half full!  I asked the office staff if the roll was indeed used up and they assured me it was.  With their blessing, I took the roll home to figure out if the yards and yards of material could be used for something.

I cut the film into squares and got out a variety of art materials to test.  First up, the most common classroom art supply, Crayola crayons.  They colored beautifully.  The colors went on smoothly and easily.  I suspect that if kids were very aggressive with their coloring, the paper would wrinkle, but that could be easily avoided by taping the film to the desk. 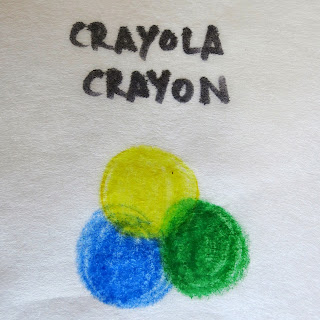 Next I tried Sharpies.  I'd labeled the Crayola crayon sample with a black Sharpie and it worked well, but I decided to make a Sharpie sample anyway.  I was surprised that the colors ran and feathered significantly.  The film broke down at the junctions between the colors.  There must be some fundamental difference between black and colored Sharpies. 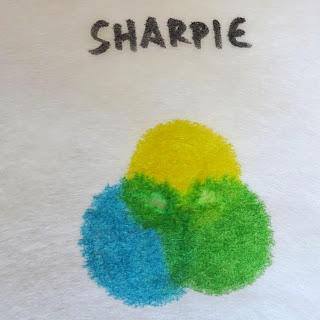 Next, Crayola markers.  I grabbed a yellow, green and blue from our bin and tested them.  I did the yellow first and was ready to declare markers a success.  But when I tried the green, the colors ran a bit.  Turns out that was one of the Washables.  Good to know. 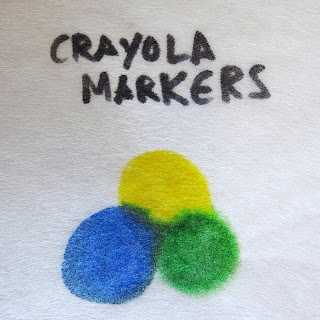 Next I tried Mr. Sketch markers.  There was a small amount of bleeding where I overlapped the colors, but otherwise there wasn't a lot of feathering or spreading.  I'm calling this a success. 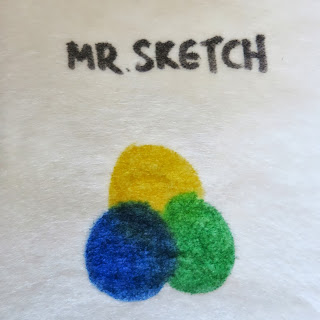 I tried Prismacolor color pencils next.  These worked beautifully!  The color glided on, with no tearing or wrinkling. 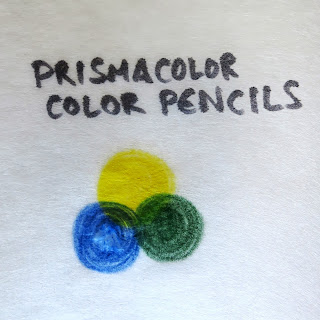 How about stamping with ink?  I inked up a foam stamp with Stampin' Up ink and it worked perfectly. 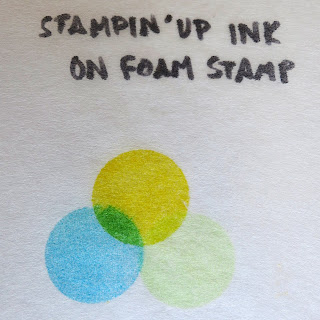 My beloved Prismacolor Premier art markers were next.  They spread like the Sharpies did, but they didn't cause the film to tear. 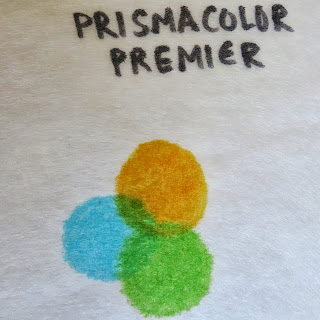 I tried soft pastels next.  They went on beautifully, with gorgeous vibrant color. 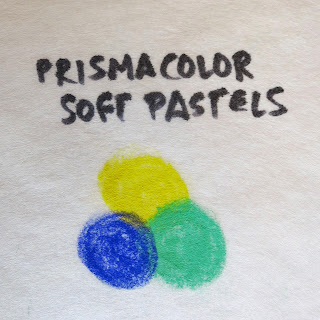 The same was true of the Holbein Oil Pastels. 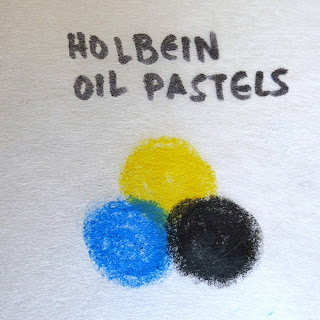 Finally, I tried washi tape.  It behaved perfectly, going on smoothly and peeling up cleanly. 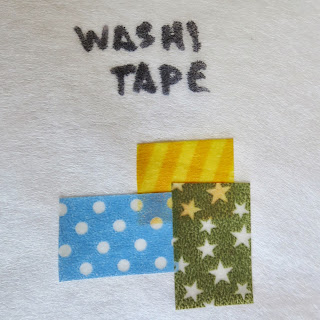 So, in summary, chances are good that there is a completely free art material literally being thrown away at a school near you.  It is sturdy, translucent (great for tracing), and stands up well to a wide variety of common classroom art materials.

Tomorrow I'll show you how I used some Riso film with yet another art supply!
Email ThisBlogThis!Share to TwitterShare to FacebookShare to Pinterest
Labels: Trash to Treasure